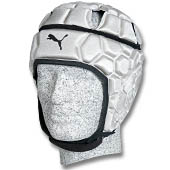 When two soccer players go up to head the ball at the same time, usually somebody wins the ball and somebody loses. Sometimes they both miss the ball and instead hit each other. As long as both players get up and play on, the standard sideline parent joke goes something like this: “Well, somebody just lost a few SAT points,” followed by peals of riotous laughter. It’s an old joke which for some reason never seems to lose it’s punch.

Having been thoroughly traumatized by the last soccer boo-boo in Atlanta, I gladly allowed Eyegal to handle the most recent tournament in Nashville. On her way home, she called to inform me that Number Two son had knocked noggins with an opposing player near the end of his last U16 match. He had appeared a little wobbly and had come out of the match for a few minutes, but reentered a bit later. After the match, he was complaining of a pretty bad headache and had taken a couple of ibuprofen. He was riding home with a teammate and would probably arrive home before her, and would I mind checking on him, she asked.

A short time later, Number Two arrived at the front door. I immediately went into doctor mode and examined his boo-boo. He had taken another ibuprofen on the way home, and his head was feeling better, he reported. A tennis ball-sized hematoma had formed above his left brow. Good, I thought, better to have the blood on the outside rather than the inside. Obviously, Number Two has inherited not only my stunning good looks and large hat size, but the Kevlar plate gene as well.

Then I thought it might be wise to ask him a few questions to see if he was oriented to person, place and time, etc:

Me: What’s your name?

Me: Where are you?

Me: What year is it?

Me: Who’s the president of the United States?

Yup, I thought, everything seems pretty much normal. Still, I’m wondering if that new-fangled soccer headgear might not be such a bad idea after all.