You probably didn’t hear about in on the news or social media, but Norah Jones got lost Friday night. 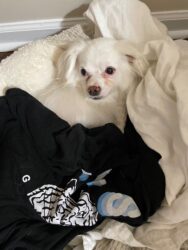 Not Norah Jones the jazzy, Grammy Award-winning singer-songwriter, although that is who this off-course and drifting NJ is named after.

This NJ is a hoary, miniscule canine furball of uncertain provenance who is at least half blind and almost completely deaf. She belongs to Number 2 son and his girlfriend N. who rescued her several years ago and have been re-rescuing her ever since.

They’ve gone to great lengths to keep her as healthy and happy as possible despite her apparent granulomatous meningoencephalomyelitis (GMC), a progressive inflammatory disease which attacks her central nervous system and affects her motor control.

Some might argue they have gone beyond reason to keep her alive. But when a dog responds well to prednisone for a long time, relapses, then rallies with a relatively inexpensive form of chemotherapy and resumes prancing like a Tennessee Walking Horse, where are all the armchair vets then, hmm? Besides, since when did reason have anything to do with love?

The last time I had seen NJ was late August, before the chemo and during a very bad relapse. She was turning in tight circles like an airplane in a stall spin. As she circled the kitchen floor, I had to nudge her toward her food bowl until she finally ran into it. I carried her up and down the stairs of the deck and placed her in the backyard so she could do her business.

One time I got distracted by Lily and Duke, our two dogs, and didn’t see NJ spin off the steps and crash into the flower bed. She was no worse for wear, fortunately, and she even wagged her tail as I retrieved her from the zinnias and basil. She reminded me of a dizzy but delighted kid dismounting a Tilt-A-Whirl at a carnival: “Let’s do it again!”

When I saw NJ post-chemo last Friday just before my wife S. and I left for Franklin and Nashville to celebrate her birthday, I was amazed. Not only was she walking in a straight line, albeit her head still slightly cocked, she was thrilled to be with Duke and Lily and chased after them. Her stubby legs couldn’t keep up, but she was just happy to make the scene and be an honorary member of the pack.

As the early fall sun illumined her face, a cool, gentle breeze combed through her long, white hair. Her mane glowed and flowed like a movie star’s in a glamour shot. She looked simply fabulous, dahling.

We had a wonderful afternoon and evening in Franklin, including dinner with a dear friend and comrade in arms with whom we have shared many victories and defeats, and proceeded to Nashville where we settled into our hotel a little before 10 pm.

The evening was supposed to go like this: Number 1 son would come to Huntsville from Birmingham to visit with Number 2 and N. and he would be carrying dog Bucky, who belonged to Number 3 son and his wife. He was keeping Bucky so they could attend the Auburn-LSU game on Saturday. Number 2  and N. would attend a wedding rehearsal dinner that evening and lock the back door but still leave the dog door available so NJ, Duke, and Lily could have access to our fenced backyard and come and go as they pleased.

That’s a lot of moving parts. So, for our late-night entertainment, we tuned into our new Ring doorbell camera to see if they could pull it off. We’ve enjoyed watching “the show” on the Ring even more than we thought we would. Knowing when a package or person arrives has been useful information. Tonight’s episode had the makings of a good one.

Still, watching your early 30-something adult offspring come and go can be boring. They are now too tired to invite all southeast Huntsville over for a party. Instead, they turn in early and Netflix it just like everyone else. No more scattered beer cans, police cars, or other emergency vehicles. Where was Ring 15 years ago when we really needed it?

Boring, possibly, but not on this night. My wife was already in bed, and I was taking off my shoes when our phones started pinging. It was the Ring camera “Person detected” alert.

Number 2 and N. had arrived back at our house; but the video from the alert showed them leaving again, first N., followed closely behind by Number 2.

Something seemed off to S. I looked over and she was carefully studying the video, the tension in the underlying muscles of her face and forehead squeezing her skin like an accordion. That’s when the phone rang, the caller ID showing Number 2’s name. In our experience, a call from one of our sons at that time of night is bad news approximately 75% of the time.

It’s a horrible scenario any way you cut it: small dog, senile and in poor health, lost at night; coyotes and foxes patrolling the dark, hungry and capable; frantic family on the scene, trying to think straight and not panic, spreading out to search, unsure exactly which way to go or turn; two parents who will never completely clock out of that job until they die, over 100 miles away, debating whether to stay put or drive back, feeling helpless and worried sick.

Number 1 arrives amid the mayhem, secures Bucky in the house with Lily and Duke, and joins the search.

The events that followed may seem extraordinary but are very much in keeping with our wired, wired world and the connectiveness we have created and cultivated, for better and for worse.

Most days I consider the internet and social media, at their worst, to be a modern-day Tower of Babel where the masses pool their evil and foolishness in screeds and manifestos and hit “Send” in the hope of becoming like gods.

On this night, however, the internet rose over our neighborhood and shined like a hundred Harvest moons.

First came a Facebook post that popped up on N.’s phone, Zuckerburg’s mysterious and creepy proprietary algorithms kicking into overdrive: “Small white dog, spotted near Bailey Cove and Corley.” Corley is our street.

Mutual friends were identified and contacted. The poster was found. She had been unable to apprehend NJ, but she had apparently shooed her away from Bailey Cove, a very busy and dangerous-for-dogs street 100 yards east of our house.

Many frantic minutes later, S., who was monitoring our Ring “Neighborhood Alerts,” spied the piece of intelligence that helped turn the tide for Operation Find-a-Pooch: “Small white dog on my back porch. 9- – Chatterson Rd. Se HSV 35802: Small white fluffy dog on my porch 10:35pm sept 30 looks well cared for. We can’t bring it in.”

The address was two blocks over from our house—it had to be NJ!

S. was able to reach Number 1 and give them the address, and he began running in that direction. He saw Number 2 and N. in their truck and yelled the address to them. Number 1 went toward the address from one direction, Number 2 from another.

They were performing a classic military pincer movement, converging on NJ like rescue forces retrieving a downed pilot from enemy territory. The only thing missing was a drone hovering overhead, providing real time infrared footage to S, who was clearly in command and control.

There was the usual initial “radio chatter” and confusion inherent in special ops, followed by cries of “We see her!” and then after what seemed interminable seconds: “We’ve got her!”

Whoops of joy and high fives all around! Little sleep for all involved, but at least the pillows and sheets wouldn’t be soaked and stained with the tears of yet another death.

I discovered as I knelt by my hotel bed with my head in my hands that night that it doesn’t matter how much you try to reason it out and repeat over and over “A dog is not a child, a dog is not a child,” your body, roiling with adrenaline and despair, cannot tell the difference.

We are a divided people, not just in opinion and among ourselves, but within our own souls.

A runner jogger in the area, dressed in all the latest gear and apparently training for a very important race, passed by and ignored N.’s pleas for assistance, muttering a dismissive, “Okaaaay . . .” He kept on shuffling rather than slowing down long enough to show a single shred of empathy or concern.

In contrast, the Chatterson neighbors who posted on Ring had not even spotted NJ initially but had been awakened by a next-door neighbor who had. Those saints-in-the-making got out of bed and found her. She wouldn’t come to them, but they went the extra mile with the “Hail Mary!” Ring post anyway. It’s unclear if they witnessed her rescue, but they did see our comments of thanks and responded with a 👍.

By the time we returned home Saturday night, a root cause analysis had revealed a slight dip in the ground under our west fence gate that served as NJ’s egress of escape for her nocturnal walkabout. Numbers 2 had sealed off the gap beneath it and our east gate with chicken wire. Further inspection revealed other weak spots in the perimeter that could potentially be breached. Adjustments will be made.

We remained a little jittery and shell shocked. Whenever any of us would lose sight of the wandering, white tumbleweed, we would yell “Where’s Norah Jones?” We developed a code phrase like soldiers in the trenches: EONJ?—”Eyes on Norah Jones?”

Eventually, we reached the point in our recovery where we could laugh about it. Number 2 pondered aloud, “I wonder what would have happened if we had named her ‘Lord’ instead of ‘Norah Jones?’”

I ventured that the Holy Ghost or perhaps a fleet of cops running full sirens and lashing lights would have descended upon our discreet, quiet neighborhood. Either mass conversion or mass arrest would have been hilarious and epic, the talk of the cul-de-sac for a generation to come. We really cracked ourselves up with that one.

Ironically, the same miracle drug that straightened out NJ’s drunken gait also allowed her crooked mind enough agency and her body enough strength and coordination to find the only possible passage beneath that narrow gate and slip beneath it to the other side.

What was she looking for? Only NJ knows for sure, and she’s not talking. But we’ve got eyes on her, waiting and watching for whatever she does next.