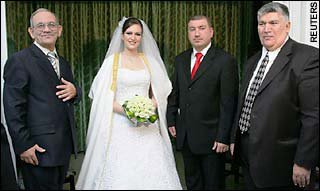 Last week’s horrific al-Qaeda bombings in Jordan are the most recent in their ongoing strategy of terrifying those who only remotely support US interests, even if it means killing fellow Muslims. The latest attack was especially egregious in it’s cowardice and inhumanity, as a wedding in full swing was rudely interrupted by two uninvited guests wearing explosive-laden vests. The two were, ironically, a husband and wife team. The wife’s bomb failed to detonate, but the husband succeeded, killing 57 members of the wedding party, including the fathers of both the bride and the bridegroom, and injuring over 90 more. 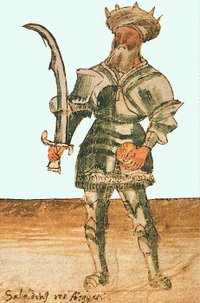 There was a time in Islam’s history when its warriors would not have entertained the notion of treading on the holy ground of matrimony. Saladin (1138-1193) was a Kurd and a native of Tikrit (also the birthplace of Saddam Hussein) who rose to fame as a Muslim general during the Second and Third Crusades. Interest in his life has increased recently with the movie Kingdom of Heaven (recently released on DVD) which portrays him as a fierce warrior who also possesses a keen sense of honor and chivalry.

There is one episode from Saladin’s life which seems to support that portrayal. In 1183, Queen Isabella of Jerusalem had just been married to Humphrey IV of Torn in a castle at Kerak in modern-day Jordan. On the wedding night, Saladin and his army attacked. According to Ernoul, a squire and eyewitness of the events, Saladin had once been a slave at Kerak and knew the bridegroom’s mother, Stephanie of Milley. Not wanting the nuptials to end on such a sour note, Stephanie contacted Saladin. Ernoul writes:

“She sent to Saladin bread and wine, sheep and cattle in celebration of her son’s wedding, reminding him that he used to carry her in his arms when she was a child and he was a slave in the castle. And when Saladin received these gifts he was exceedingly delighted and gave thanks to those who brought them to him, asking where the bride and bridegroom were staying: their tower was pointed out to him. Thereupon Saladin gave orders throughout his army that no attack should be directed at this tower.”

Times have apparently changed. It would appear that the spirit of Saladin is dead, replaced by the cowardice and hardheartedness that were at the center of last week’s suicide-bomber attacks. Collateral damage and loss of civilian life are sad facts in the sad history of warfare. But to intentionally target a innocent young couple and their family and friends on their wedding night is the epitome of evil. Indeed, it appears that homicidal fools now rush in where honorable men once feared to tread.