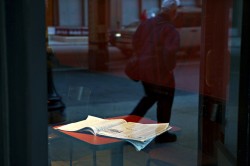 The barista turned and cocked her ear, recognizing the familiar footfalls—one human, male, one canine, sex undetermined. She was the tip of the caffeinated spear and took pride in knowing her regulars, including each one’s drink, stride length and cadence.

Ha, you’ve got me nailed. Better make it a venti. Long night ahead.

She mixed the concoction quickly and handed the cup to the cashier. Hope you enjoy it, sir.

Thanks, smells great. He took a quick sip. Mmm, awesome.

She liked the sound of his voice. He was young but seemed an old soul.

She grabbed a towel and started cleaning tables, moving systemically, counterclockwise, until she was near his, the one by the window. The dog’s tail picked up the beat.

I think he likes you.

I love that show!

I love that show too, but not that Homer. The poet.

Oh…D’oh! They both laughed. What kind is he?

Of course, I, I should have known that. May I pet him?

Well, he’s a guide dog, but since he’s not working, feel free.

She drew in a quick breath. Oh, I’m sorry. I didn’t realize you’re…

Blind? It’s okay, glad it’s not obvious. We don’t all wear dark glasses and play the piano like Stevie Wonder.

She relaxed and slowly reached down to pet Homer, her fingers extended, searching. He readily accepted her touch and stretched his snout upward so she could scratch the soft underside of his neck.

I hope you don’t mind me asking, but you seem awfully young to be blind. Were you born that way?

I don’t mind. Been blind since August, 2006. IED, piece of shrapnel, right, here… He pointed to the bone just under his left eyebrow. Took out my left eye, sliced my right optic nerve in half.

Don’t be. I lost my sight, but I had buddies who lost more. I still have two good legs and arms and a brain. All my other parts work, too, he smiled.

I manage. Blind Rehab and a good shrink at the VA helped a lot. I’m in school.

Cool. What are you studying?

Taking classes at City U. to be a high school counselor.

Ha, barista humor! Yeah, I was pretty clueless myself in high school. Maybe I can talk some sense and get ’em to think a little.

The time is THREE O’CLOCK, a digital voice chimed.

Oh, just my talking watch. Look, nice to meet you, but I gotta go—3:30 class. He threw on his backpack, grabbed Homer’s harness and started out the door.

See ya, he called out, laughing.

Yeah, yeah, see ya, she replied, completely getting the joke.

As she wiped his table, she fingered a magazine he’d left behind. Reflexively, she began to move both hands across the pages, her index fingers lightly skimming the peaks and valleys of embossed code. It was Rolling Stone, and one headline in particular caught her attention: President Sends 10,000 More Troops To Afghanistan.

She always hated to admit it, but she was glad her mother had insisted she learn Braille.

Her eyes started to ache, the pressure inside them rising like the afternoon mercury. She walked behind the counter, found her purse, and fished out the tiny bottle with the teal cap in the side pocket. It didn’t take a talking watch to tell her it was time for her afternoon eye drops.