Mondegreen (noun)–a series of words that result from the mishearing or misinterpretation of a statement or a song lyric, e.g. I led the pigeons to the flag for I pledge allegiance to the flag. —http://dictionary.reference.com/

When I was a child, I sometimes didn’t hear things the way I was supposed to. Of course, this may have been partly due to the heavy ear wax which plagued me back in those days. Like most boys, I had more than my share of the greasy stuff, and every Saturday night my mother would subject me to a weekly ear cleaning. This was performed with a Q-tip moistened with Johnson’s Baby Oil. My mother would plunge the cotton-tipped applicator down the ear canal and swipe away a week’s worth of deposits, or least enough so that none would be visible the next day at church. 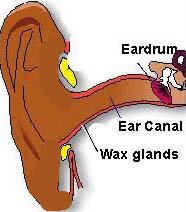 Somehow I don’t think she got that little tidbit from Dr. Spock. It makes me wonder if moms back in the 1960s would sneak a peek into the ears of their friends’ children come Sunday morning, perhaps rating one another by the amount of visible wax left over after the Saturday night cleaning–good grief, look at little Johnny! Might as well stick a wick in there and light it!

Of course Mom meant it for my good, but despite her best efforts, I still misheard many hymns and passages of scripture as a kid growing up in the Church of Christ. For years, I suffered from the guilt and humiliation of having misheard so often and so much, but recently I was relieved to hear that this is a common experience. In fact, there’s even a name for the syndrome: Mondegreenism. Mondegreens occur when one mishears or misinterprets a statement or the lyrics to a song. For me, that occured with such frequency that I’ve been able to compile an extensive list over the years. So, lest we take ourselves too seriously this holiday season, I give you, dear readers, my list of Top 10 Holy Mondegreens:

10. “Hark the Harold Angels Sing.” This is a common one, apropos for this time of year as we all start to crank out those Christmas songs whose words we know sort of well, but usually not well enough. My father’s first name was Harold, and since he was an elder and the main songleader at our church when I was a kid, this one caused nary a spike in my brain wave pattern. It seemed natural that a guy who had that much pull with the Guy Upstairs would have his own angels. What’s the big deal?

9. “He had seven hundred wives of royal birth and three hundred combines, and his wives led him a stray.” (I Kings 11:3) Although I wasn’t raised on a farm, I did grow up around farmers and lots of farm equipment. I remember thinking that three hundred combines must have meant a heckuva lot of corn, but given the context of the passage–i.e., seven hundred wives–this seemed normal since there would obviously be a lot of mouths to feed. The part I didn’t get was all those wives leading seven hundred stray cats on leashes toward Solomon’s throne. There were a lot of strays hanging around my house in those days, but seven hundred for Pete’s sake? There’s no way my family could have produced enough table scraps to feed a bunch that large! But I guess Solomon’s family could.

8. “Lettuce have a little talk with Jesus.” I didn’t always eat a good breakfast before church, so by the time class and worship was over, I was usually pretty hungry. I suppose I should have expected a few images of food to pop up occasionally. In this case, I pictured a robed and sandled figure, hands outstretched in compassion over a crowd of people with “lettuce heads.” As we shall see, this would not be the only food-related reverie to, uh, rear its ugly head.

7. “He punched me to victory beneath the cleansing flood.” You have to admit, “punched” and “plunged” are very close, even without ear wax to complicate the picture. I had images of a person being baptized and being held under the cleansing flood just a little too long. When the baptizee began to squirm and protest, the baptizer would pop him a few times in order to keep him under water long enough for the baptism “to take.” I kept watching all the baptisms and waiting for this to happen, but it never occurred. After a while, I figured it was probably safe to get in the water.

6. “Just as I am, without one flea.” I never figured that any of the people I saw “going forward” during the standard 55 verses of Just As I Am had any fleas, but I suppose it was possible. Still, why talk about? Was this really some kind of scriptural requirement for repentance? Don’t tell me that Jesus and those twelve guys lived and slept outdoors in Palestine back in those days and never managed to pick up any “hitchhikers.” We all know better than that.

5. “I am not afraid of ten thousand tough people who have set themselves against me.” (Psalm 3:6) This passage of scripture was made into a song which I used to belt out heartily, converting “tens thousands of people,” to “ten thousand tough people.” Given the context of the passage, this made perfect sense to me–the guys going after David were no pansys. I continued to sing it this way into college, until one day a minister setting next to me overheard my maladroit mondegreen. At first I thought he was having a heart attack or a seizure, but then I realized he was doubled over in a fit of holy laughter–a little too late, though, to save face in front of the large crowd who soon learned what all the commotion was about.

4. “Low in the gravy lay, Jesus my savior…up from the gravy and rolls…” This was one of those songs that Dad like to slip in around Easter, just to show everyone that it was ok for a Church of Christ to celebrate too along with all the other Christians. By the time we sang this hymn, my stomach was obviously starting to really growl. While Jesus obviously needed to escape the clutches of death, the irony was I really liked the idea of wallowing around in a big mess of gravy and rolls. I told you I was hungry.

3. “He arose a victor from the dark old maid…” Same song, second misunderstanding (WARNING, POLITICALLY INCORRECT CHILDHOOD MEMORY ALERT!). On those occasions when I was lucky enough to get a decent breakfast prior to church, it was usually pancakes and syrup. When we sang this verse, images of syrup bottles danced in my head, and I couldn’t help but think: What’s Aunt Jemima got to do with the Resurrection?

2. “Homes where the mother in queenly quest, tries to show others her way is best…” God Give us Christian Homes is one of those songs that just makes me smile. I remember chapel at Harding University and barely being able to keep it together whenever we sang that one. It’s not that I don’t agree with the message–we really do need more Christian homes (or at least more serious Christians in our homes). It’s just that the 1950s Eisenhower-era images that the song invokes seemed a bit anachronistic. The other day, my wife and I were fondly recalling this song, and in my enthusiasm I belted out the line above. She laughed and said, “Honey, I think you mean ‘show others thy way is best,’ but I like your version better!” Yeah, yeah, go ahead and yuck it up–I suppose after twenty years of marriage it’s not surprising that I would finally start seeing things “her way.”

1. “There is a Bomb in Gilead.” This song had a beautiful melody which seemed totally out of synch with the lyrics. I remember looking around as a kid at all the adults calmly singing this song with relaxed and peaceful expressions on their faces and thinking: What? Are you all crazy? Let me get this straight: there’s a bomb in Gilead and we’re going there anyway, aaaand everyone’s OK with that?

So, there you have it, my Top Ten list of Holy Mondegreens. I bet you can remember a few of your own if try. Go ahead and think about while I excuse myself. You see, I’ve still got a little ear wax that I need to clean out.