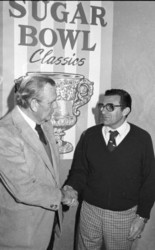 I’ve been thinking a lot this week about my impending geezerhood.

Actually, I think a lot about it every week since the majority of my patients are on the far side of fifty and serve as a “sneak preview” of the doctor visits, pills, surgeries and saggy body parts which are waiting for me just up the road around the next bend–if I’m lucky. Each day I stare mortality in the face, and it stares right back at me, sticks out its tongue, and proceeds to regal me with stories of blurry vision, “itchy-burny” eyes and prostrate problems.

Yes, apparently spending inordinate amounts of time stretched out with one’s face to the ground in the universal posture of adoration or submission is something that all of us guys have to look forward to.

But here’s what I’ve decided–despite all the health challenges awaiting me (indeed, some already greeting me), I want to be a good geezer, not a grumpy one. I hereby resolve to evolve into a cuddly codger.

I want to be like the garrulous geezers that I met along the Huntsville Greenways this past Labor Day on my morning run. Typically, they’re dressed in white socks and sneakers, khaki shorts hiked up past their navels, plaid, short sleeve, gingham shirts buttoned all the way up, their snowy crowns topped off with either an Auburn or Alabama ball cap.

They meet your gaze as you run past, throw up their hand toward the sky, palm facing outward, and yell “Howdy!” The dogs they’re walking usually reflect the personality of their masters; oversized, doofus breeds, some pure and some mixed, always straining against their leash and leaning toward you, yelling “Howdy” with their wet, dark eyes and trying to lick your hand.

I don’t want to be like the grumpy ones with ear buds, who, when they saw me coming, moved off the path and averted their gaze as if I either had leprosy or was wearing an Obama bumper sticker.

Here’s an observation that I made while I was out running: Geezers with geezerettes in tow are typically more friendly than those who are flying solo. Women, as history bears out, are indeed a great civilizing influence.

This makes me want to double down on my efforts to help keep Eyegal healthy so that in future years we’ll be able to toddle down life’s path together. I want us to to be the kind of couple that when the young woman walking past us down the path sees us holding hands and making googly eyes at each other twenty years hence, she’ll smile and look at her boyfriend and think Aw aren’t they sweeeet? That could be us!, just like she does in that Zales commercial.

I told Eyegal the other day that if we double-up on the brats and beer and starting listening to more classical music in the evenings, we could end up like Heinz and Kaete Hilten.

What I don’t want is to end up a grumpy geezer like “Pastor” Terry Jones of Gainesville, Florida, he of the bushy, “wide stance” mustache and the “I know I’m right and the rest of you can just go straight to Hell!” mentality. Lord have mercy, anything but that. Please, just send me before the “Death Panel” (a unanimous “thumbs down”) and euthanize me first before I have a chance to hold the entire country hostage with an attention-garnering temper tantrum.

No, I’d rather be like the guy with the trademark Coke-bottle, photo-gray lenses, the octogenarian Head Football Coach of Penn State, Joe Paterno (although I have no plans to work that long).

Oh sure, JoePa has had his share of “senior moments” over the past few years, including press conferences where he forgets the question that the reporter just asked him, the little “road rage” incident awhile back, and that time against Ohio State when they had to delay the snap from scrimmage because he was trotting down the sideline and then across the end zone to the men’s restroom (the “old G.I disease,” he called it).

Forget all that. When the hoary, Ancient of Days is introduced before the capacity crowd at Bryant-Denney Stadium in Tuscaloosa on Saturday evening, he will receive a warm and fuzzy standing-o because of his “body of work.” Alabama fans know a few things about coaching icons and track records, and JoePa will be showered with the respect that he so richly deserves.

As the applause rises up and echoes throughout the cavernous expanse of Bryant-Denny, JoePa will rise as well–very slowly–and wave to the crowd from his perch in the Penn State coaching box, where he now presides like the figurehead on a throne that he is. He will then turn toward one of his assistants and ask the most, uh, “pressing” question of the moment: “Jesus Christ, man, which way is the men’s restroom?

Guys, see what you have to look forward to?

Roll Tide, Roll–but, please, not until I find that restroom.