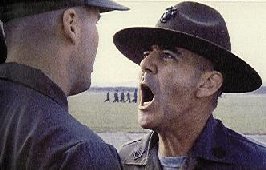 A young Marine officer was in a serious car accident, but the only visible permanent injury was to both of his ears, which were amputated. Since he wasn’t physically impaired he remained in the Marines and eventually rose to the rank of General. He was, however very sensitive about his appearance. One day the General was interviewing three Marines for his personal aide. The first was an aviator, and it was a great interview. At the end of the interview the General asked him, “Do you notice anything different about me?”

The young officer answered,” why yes, sir. I couldn’t help but notice that you have no ears.” The general got very angry at the lack of tact and threw him out.

The second interview was with a female Lieutenant, and she was even better. The General asked her the same question, “Do you notice anything different about me?”

She replied, “Well, sir, you have no ears.” The General threw her out also. The third interview was with a Marine Gunny. He was articulate, looked extremely sharp and seemed to know more than the two officers combined (surprise).

The General wanted this guy, and went ahead with the same question, “Do you notice anything different about me?”

To his surprise the Gunny said, “Yes sir; you wear contact lenses.”

The General was very impressed and thought, what an incredibly observant Gunny, and he didn’t mention my ears. “And how do you know that I wear contacts?” The General asked.