John had always told me, “Mike, when you walk into a room, you’ve got to make them believe that you’re the biggest gunslinger in the bar.”

He was referring to the way that I carried myself as I walked into the exam room. I guess he must have noticed the deer-in-the-headlamps expression on my face and the way that my jaw dragged along the floor as I encountered a dizzying array of eye disorders and diseases in those early days of my residency; nasty, often bloody, blinding stuff that never looked (or acted) quite the same way as the atlases and textbooks said it would.

He wasn’t saying I should be cocky and cavalier. He was simply exhorting me to present myself in a way that inspired confidence, to give off such an air of competent calm that after a few minutes with me a patient would feel a sense of hope. Here, they would think, is a man who knows his stuff and has the situation–dire as it may be–completely and unmistakably under control.

I thought of those words of advice as he was introduced and began to make his way from the back of the room, holding one small slide up to the overhead chandelier lights, staring at it and grinning in that wry and omniscient way of his. Three hundred pairs of eyes followed him as he stopped halfway and deposited his slide in the projector that was positioned in mid-aisle. Suddenly, the screen at the front of the lecture hall was filled with the image of a healthy, normal retina. John continued to amble nonchalantly toward the front of the room, the soft, steady padding of his well-worn and slightly out-of-style loafers the only sound that could be heard over the hush of the crowd.

He was one man with one slide, and two hours of talk time to fill. There was indeed a new gunslinger in town, and he was about to stand and deliver the goods, lost luggage or not. Placing his slide carousel in his checked baggage wasn’t the kind of mistake that a seasoned traveler and lecturer like John tended to make, but what was done was done, and he would have to simply make do. 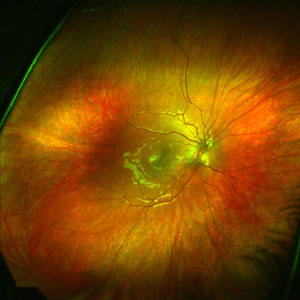 But he did much more than that. Starting at the donut-shaped optic nerve and working his way across the diaphanous macula and sensory retina, along the winding, branching vascular tree, out into far reaches of the periphery, even to the far-flung and scalloped terrain of the ora serrata, John wove together over 20 years of tales from the trenches, of pitched battles and desperate countermeasures fought against a relentless host of retinal diseases. He told stories of both victories and defeats, of sight saved and sight lost. He explained how resilient the body and the retina were, of how patience and moderation–“First do no harm”–were the bywords and basis of good therapeusis and compassionate, effective care.

For two hours, he held three hundred of his peers in rapt attention, pouring out his wealth of wisdom in shimmering streams of winsome wit, mentoring the masses in the same way that he had guided me on those many occasions when I had brought him a patient’s chart, my hands all a quiver, draping myself across his desk, begging and pleading for any scrap or morsel of wisdom to help me make it through one of those long, 50-patient days.

As he closed and thanked his audience for their attention, apologizing again for his careless mistake and his back-against-the-wall improvisation, there was a brief silence and then–thunderous applause. Up they stood, all three hundred, knowing that they had been privileged to witness something very special and rare, an in-the-zone performance, shining “old school” oratory the likes of which they had never seen before and would probably never see again.

He was one man with one slide, speaking from the very center of his soul–his heart.

And it was a beautiful thing to behold.