–Chris Carter, creator of “The X-Files” 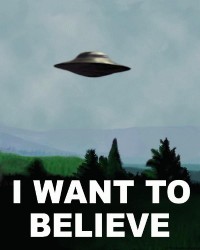 A friend of mine told me recently that I was “altogether too polite” and that I didn’t ask enough “tough questions.” This came as news to my family, especially my sons who, on more than one occasion, have felt the probing, white heat of one of my infamous, late-night interrogation sessions following one of their nights on the town (“Vee have vays of making you talk!”).

They knew better. “Dude’s crazy,” was the consensus. The thing is, he may very well be.

I had spent nearly a year exchanging emails with the man, fleshing out a hidden story that occurred a long time ago, one that I hope to publish sometime before the next Ice Age or Republican president, whichever comes first.

Finally, we’d had a chance to sit down face-to-face for a few days and talk things over. I had checked and cross-checked the elements of the story that he had told me over the previous months and felt satisfied that he had it pretty straight and was telling me the truth, or something very close to it at least. The interview brought a few more tasty morsels of information to light, the kind of spicy details that add a little more flavor to what was already a tasty concoction.

But he told me a lot of other stories as well. Indeed, he was a raconteur of the highest order, perhaps the best I had ever heard.

He claimed to have, among other things, seen a couple of UFOs (including one with “portholes”), visited a colony of UFO true believers in Georgia (not to live there but to ask them questions and assess their claims), watched a lady ghost glide across the floor of an old house in a Southwest Virginia mining town, played tug-of-war with a magpie on the other end of a shoe string, witnessed a flock of blackbirds jump in unison on a tree limb in order to produce enough harmonic oscillation to drive off an interloping bald eagle (and then celebrate their victory with a wild party), and possibly caught a rare glimpse of Ogopogo, a cryptid, Loch Ness-like monster that supposedly lives in Okanagan Lake in British Columbia.

His gripe was that I didn’t question him more aggressively and attempt to poke holes in his story. Instead, I sat there grinning, mouth sometimes agape, nodding politely.

Well, there are a couple of reasons for that. You’ve got to understand that in my line of work I hear lots of strange stories. I thought I was getting off light by switching from psychology to optometry, but boy was I wrong! In many respects, my time spent listening to his odd tales was simply another day at the office.

But there’s a even more important reason: “I Want To Believe.”

If that line sounds familiar, it’s probably because you’re, like Eyegal and me, a fan of the TV Show “The X-Files.” In the 1990s, Sunday nights were set aside in our house for the exploits of Mulder and Scully (Faith and Skepticism), two FBI agents assigned to unsolved cases with no apparent natural explanation. We fed the boys, put them them in a playroom full of toys, shut the door and double-dared them to come out. We then popped a couple of ginormous bowls of cheesy popcorn and plopped on the couch for a blessed hour of peace and pure paranormal mayhem.

One time, Number One Son got curious and wandered out to peek into the living room just as Flukeman, the half-man, half-worm mutant formed in the radioactive bowels of Chernobyl, scared the bejesus out of us and the rest of America by attempting to suction-out a glass window plate with its enormous, Mick Jagger lips. It must have made quite an impression on the little fella; the boy still talks about it to this day.

It was, in an oh-so-predictable and workaday world of dirty diapers, long hours, sleep deprivation and very little cash, a brief respite, some much-needed–and I think, harmless–escapism.

It also fed our faith that “The Truth Is Out There,” perhaps somewhere beyond the reach of our senses. Anyone who had actually spent a single second thinking about the claims we made in church ought to have felt a least a little bit of sympathy for Chris Carter.

I feel the man’s pain; I, too, have almost been split in half at times by the tug of war, the tension between Faith and Skepticism.  Like all stories that take us out of our time and place and enable us to transcend the mundane, that Sunday night hour was a mental rehearsal, a cathartic untangling of the knots tied by Reason in the face of so much Unknowable.

So when I hear stories like my friend told, I don’t want to mess with such great tales too much and spend all my time deconstructing and debunking them. I don’t necessarily swallow them whole, but I don’t spit them out either.

Instead, I prefer to hold them in the balance of my hands, withholding final judgement “until all the facts are in”–as if that’s ever going to happen.

Stories of aliens, ghosts, animals with preternatural powers, and monsters lurking in the murky depths give me life and hope. They keep me humble. They keep me on my toes, wondering, waiting and watching for what comes next: The White Witch, Aslan, Little Green Men, who knows?

In a world of low tolerances and precise specifications, where every nut and bolt is engineered to the nth degree, it is comforting to still find a few loose screws. The sound of them rattling around is music to my ears.