A former college professor of mine at Harding, Dr. Joe Pryor, was famous for his bow ties and his nerdy (and charming) way of saying things.

Whenever it snowed or iced in Searcy, Arkansas and the sidewalks around campus grew slick, he would stand behind the podium during chapel and declare, in his best Ben Stein “Ferris Beuller” economics teacher monotone, “Be careful walking around campus today; the coefficient of friction is extremely low.” 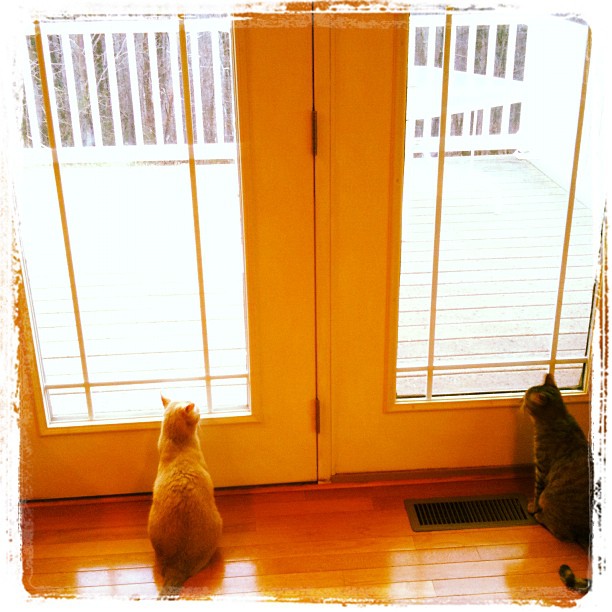 I thought of him last Sunday when the coefficient of friction on the roads near my birthplace in southwest Virginia suddenly dropped to near zero. It started snowing that morning, not hard, but enough to capture the attention of my sister’s two curious cats, Twinky and Zinger, who sat on their haunches and stared out the patio window watching the flakes fall.

Eyegal and I, along with my sister and brother-in-law, drove across Windy Gap Mountain to Roanoke for church. The twisty road, full of near 180-degree switchbacks, was still clear. 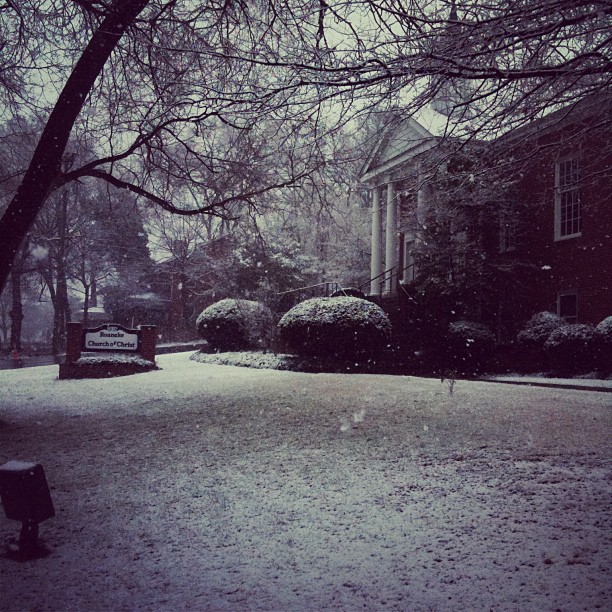 Somewhere between the invitation hymn and the final amen, I glanced through the translucent church windows and saw larger flakes falling faster. When we exited the building, the front lawn and shrubs lining the steep steps leading to the front door were coated with thin, white dust.

We ate a casual lunch with old friends from church and then proceeded east on US 460 toward Lynchburg to see a favorite aunt and uncle. The snow kept falling, but the temperature was still too high for it to stick to the road. Pre-positioned snow plows and salt trucks lined our route, though, like sentries at the ready.

My aunt and uncle were glad to see us and we them. We enjoyed our visit way too much to monitor the weather or pay much attention to the gray clouds moving in rapidly from the west.

Back in our front-wheel drive Hyundai Tuscon (I had left the sure-footed Audi Quattro at home), we headed west on Route 122 toward Franklin County where we planned another stop to visit another favorite aunt and uncle. I started noticing more slush just past Bedford, and by the time we hit the one traffic light in Moneta, the gray clouds let loose, and the road turned completely white.

With my luck, the light was red. I planned to run it in order to avoid getting stuck, but suddenly Eyegal yelled, “Cop!”

An officer of some sort had flashed his lights as he saw me approaching. I was too close to gear down properly without slamming on the brakes. I tried not to press too hard, but I still ended up sliding several feet to a stop just under the light.

Great, I thought. I reached down and slipped the shifter to manual and switched to “1.” When the light turned green, my front tires spun like a roulette wheel, fighting hard for traction.

I shifted to “2” and the fishtailing settled down and finally stopped. Soon we were crawling along behind another driver in a smaller Hyundai sedan. I tried to follow along in his tracks, but they kept filling with snow even though I was just a few car lengths behind. The driver’s way of slowing down and speeding up made it difficult to keep my distance, and I pleaded out loud, as if the driver could hear me, for the car to keep going.

We saw cars off the side of the road, even one that would have flipped and tumbled down a steep embankment had it not been for a row of trees. Several people had stopped to help. Men in 4-wheel drive Subarus and Toyota trucks with chains passed by lickety-split in the other lane, and I wished that I was one of them–or at least driving the Audi.

My brother-in-law, a rural postal carrier who is accustomed to extreme conditions, was in the back seat. I thought about pulling over in a flat parking lot somewhere and letting him take it the rest of the way home.

But my pride would not allow it. When you’ve spent the majority of your adult life in Alabama, you worry a bit about your snow-driving skills atrophying. But what kind of native-Virginian would I be if I didn’t try?

We called my uncle and gave him our regrets and continued toward home. I worried about the sharp turn up a steep embankment on Harmony Road, but by the time we arrived, the men in the Toyota trucks and Subarus had already passed through, leaving a junction of crisscrossing ruts cut deep by their studs and chains.  I found a good track and followed it up the hill without so much as a single slip.

The road was mostly flat now, with one more big hill to go. The tension was easing; even if we got stuck, someone could walk the rest of the way, fetch the Chevy Blazer my brother-in-law uses to deliver mail, and ferry us home.

I slowed down in front of the small, brick rancher where I grew up and prepared to make the turn up the big hill to my sister’s house. As I did, another man, driving a jacked-up Ford or Chevy, came barreling down the hill.

I held my breath, but we managed to share the road, passing a mere three feet or so past each other. It may have been my imagination, but I’m pretty sure the man nodded in respect.

Parked at my sister’s house, I had Eyegal snap a couple of pictures of me beside the Hyundai, the kind you might see taken as a memento from a deep-sea fishing trip, or maybe an African safari. As I stood at the rear end of the Tuscon by the Alabama license plate and 2011 Bama National Championship magnet, I smiled for one, then crossed my arms and put on my best game face for the other. 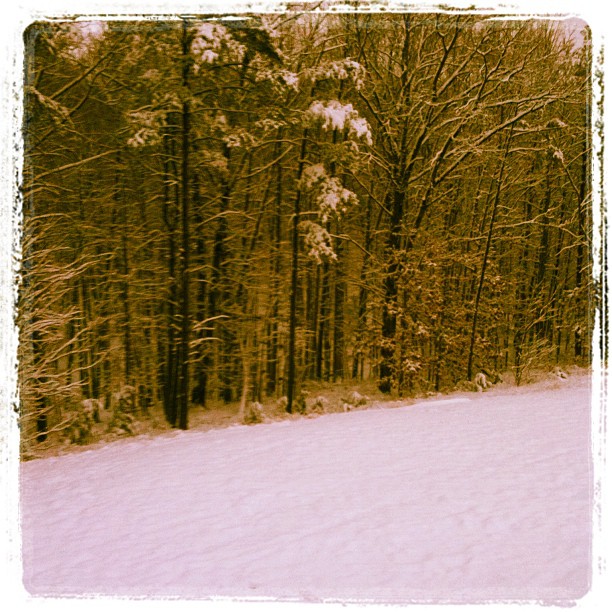 It wasn’t quite a blizzard of arctic proportions, but by the time the snow slowed later that night, we had 8 inches. I watched as the woods on the hill above where I grew up, “lovely, dark and deep”, filled with snow. Tomorrow, there would be miles to travel and promises to keep. But for the moment, the tree limbs, a tangle of white, bony fingers and puffy, low-lying clouds, were enough to occupy my mind.

The next morning, I looked down the hill at a wintry landscape fit for a painting. The roads were clear. The faithful Virginia DOT crews had worked through the night. It wasn’t magic; it was taxes. We would be able to visit my other favorite aunt and uncle after all before heading home. I had gone to Virginia to seek my roots and a little adventure and found both. 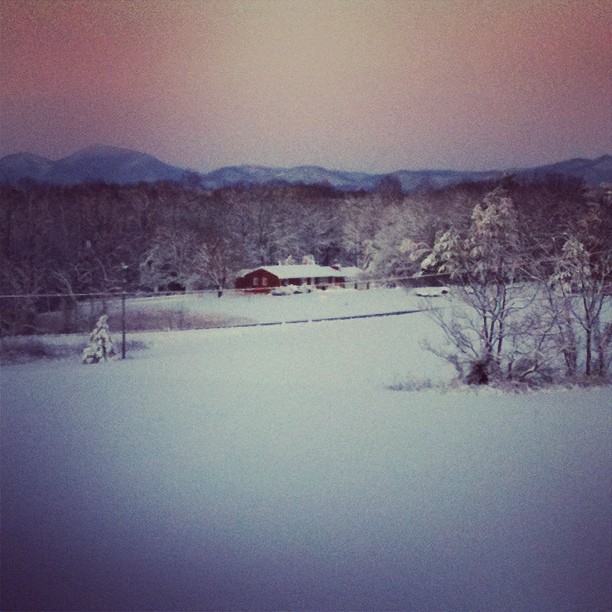 There’s a certain euphoria that courses through your veins when you brave the elements and trek across a dangerous, primeval trail and come out on the other side. It quickens the pulse and makes you feel more alive than you have in a long time.

It also gives you confidence that the next time the coefficient of friction drops to near zero and things start slipping away, you just might find the traction you need–and keep on going.