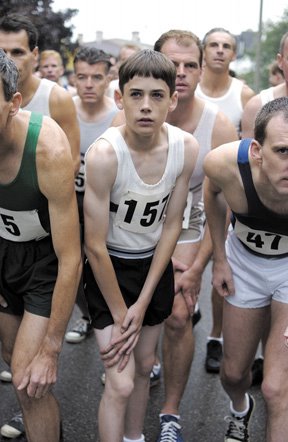 Faith, purity and prayer. According to Catholic theology, these are the ingredients needed in order to perform a miracle. Unfortunately, Ralph Walker, a 14-year-old hormone-driven parochial school student, has, just in the previous week alone, taken the Lord’s name in vain 211 times, had 22 impure thoughts (along with 22 sins of the flesh), and contemplated murder. For him, faith, purity and prayer are about as rare as rosary beeds and Hail Marys at a fundamentalist tent revival.

Hamilton, Ontario is the setting for the warm and quirky running movie, “Saint Ralph,” recently released on DVD. The year is 1953 in a time when the pre-Vatican II Catholic Church loomed large in the lives of many North Americans, defining and controlling nearly every aspect of their existence. Ralph’s father was a war hero killed in World War II and his mother is extremely ill and hospitalized, presumably from cancer.

Things are nearly as bad at school where Ralph’s awkward adolescent looks and nerdish antics coupled with his brash belief that he is “destined for greatness” make him a prime target for the bullying pranks of older students. Father Fitzpatrick, the stern Headmaster of St. Magnus Parochial School, is concerned about Ralph and his growing appetite for a full course menu of venial and mortal sins.

An embarrassing incident at a local swimming pool (note to parents of adolescent boys: if you’re watching the movie with your sons you might want to fast foward through this scene–no use in making matters worse than they already are!) convinces Father Fitzpatrick that desperate measures are needed in order to save Ralph from an eternity in purgatory. His final solution is to order Ralph to join the school cross country team in the hopes that burning off a few million megawatts of his copius sexual energy will render him incapable of sins of the flesh. Ralph is less than thrilled, especially when he discovers that his coach is Father Hibbert, a Nietzsche-reading priest with a somewhat dark and mysterious running history of his own.

After Ralph’s mother lapses into a coma, he is told that “only a miracle can save her.” When he later learns from his coach that a ninth-grader from St. Magnus would need “a miracle that rivals the loaves and fishes” to win the Boston Marathon, Ralph knows what he must do to save his mother and avoid his worse fear of becoming an orphan. Spurred on by a vision of God in a Santa suit, Ralph sets out to train for and win the Boston Marathon, totally oblivious to the fact that no 14 year-old should be running in that storied race much less dreaming of victory. Father Fitzpatrick is determined to shelter Ralph and “keep him in his place,” while Father Hibbert, who is initially skeptical–like a good existentialist–of Ralph and his commitment, eventually is won over by Ralph’s earnestness and agrees to coach him in his effort.

Ralph eventually makes it to Boston, but prior to the race he is still having doubts about whether he has enough faith, purity, prayer and speed to pull off the improbable upset and produce his miracle. After a humorous moment when Father Hibbert and Ralph resolve the purity problem, the priest goes on to reassure Ralph that prayer will not be a problem since every marathoner finds himself praying around mile twenty. As someone who has trained for and completed a marathon after smacking against “The Wall” like a bug against a windshield, I concur.

The race is a stirring and beautiful reenactment of the world’s most prestigious marathon set against a haunting version of Leonard Cohen’s “Hallelujah” sung by Canadian Gord Downie. I’m still sorting through the lyrics and how they pertain to the themes of this movie (as if they even have to in this postmodern world, right?), but I was particularly struck by the idea expressed in the song of doing one’s best, falling short, yet still standing before the “Lord of Song with nothing on my tongue but Hallelujah.” Ralph, Father Hibbert and Father Fitzpatrick all learn, in one way or another, the meaning of these words in their lives by movie’s end.

I’m a sucker for coming-of-age movies, especially those involving athletic themes (see “Breaking Away,” 1979), and I found “Saint Ralph” to be a satisfying and authentic portrayal of both adolescent angst and the tension between Reason and Passion which is present in all our lives. So if you’re browsing in the movie store this weekend and in the mood for something more thoughtful, charming and eccentric than your average cookie-cutter “Latest Release,” then check out “Saint Ralph.” You may find yourself nodding in affirmation at the notion, which has been on my mind quite frequently lately, that the Holy Spirit runs freely throughout creation, often producing the most delightful miracles when unfettered by the chains of organized religion and the walls of churches.