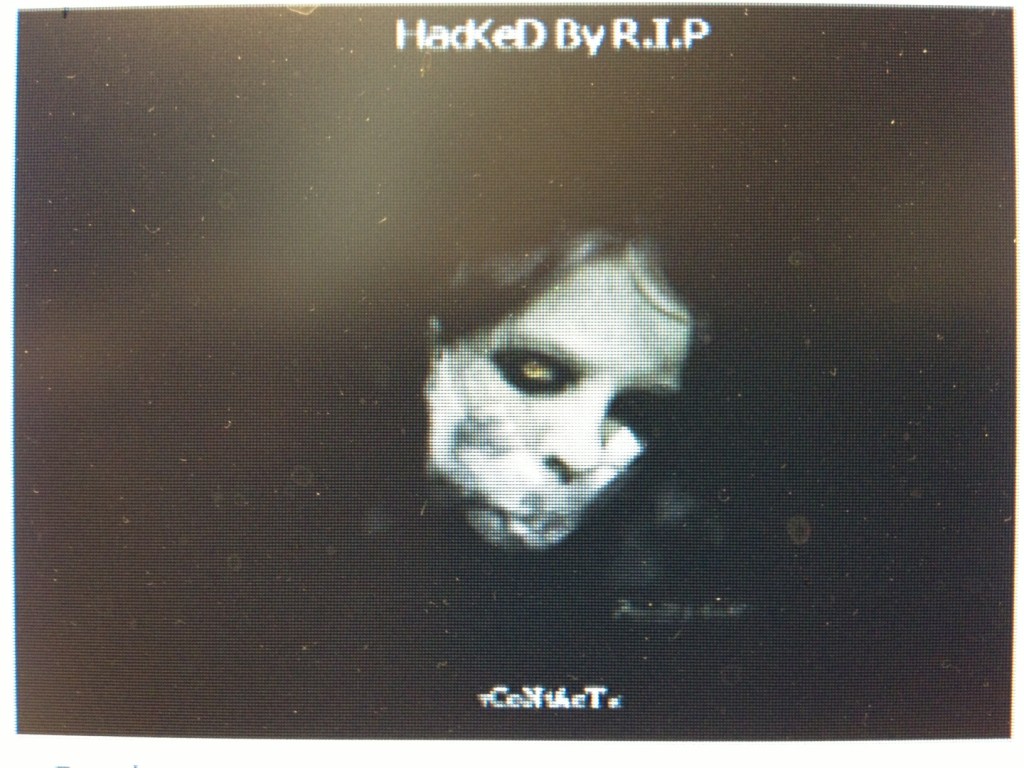 The word, appropriately enough, came to me through a text message on my iPhone, one of dozens a day. It was from Number Two Son in Pensacola: “Hey what’s up with your blog? I tried getting on and there’s this weird face and it says you’ve been hacked!”

I was close to a computer, naturally, and even if I hadn’t been, I had my “device” tucked in my white clinic jacket. I clicked on the link to Ocular Fusion–what I saw widened my mouth and caused me to inhale sharply, like a fish out of water, gasping for air.

Instead of seeing 7 years and 75MB worth of middle age angst, I beheld the emerald-eyed, pallid face of a corpse, its mouth covered with strips of tape like a sealed crime scene. It was bone-chilling creepy, on the order of Heath Ledger “Joker”-level creepy.

“HacKeD By R.I.P” spake the corpse. At the bottom was a convenient contact email in case I wanted to vent my anger on the interloper and thereby provide it even deeper access to my soul.

I’m part of a tight and top-secret coterie of virtual friends who stay in close–sometimes suffocating–touch. Before I had even contacted my web-host service, I sent out an online SOS: “OMG, I’ve been hacked!”

Almost immediately, my device began to chime with pangs of sympathy, disgust, and fret over whether or not clicking the link to my blog had launched a hacking pandemic (a computer security expert among the group, reputed to have decent hacking skillz himself, assured us it hadn’t).

I punched in the number to my web-host provider, fully expecting a dense land mine field of a phone menu. Instead, I got a live, human voice, not Robo Rob.

“Hello, may I help you?” asked the mellifluous voice.

Taken aback and thinking I had misdialed, I verified that this was “Acme” web-host service. “Yes,” came the reply, “it sure is. How may I help you?”

“And…how may I help you?” asked the voice, nonchalantly, as if people get hacked everyday and my particular hack was no greater or more important than all the other millions occurring at that very second.

“I’m sorry sir, but you’re going to have to send an email to technical support so that they can generate a ticket.”

OMG. In this day and age, you actually manage to get a voice, presumably not a robot or a zombie, on the phone–without even hitting zero–and still nobody wants to talk to you.

Soon my particular hack [Ticket ID: 797549] was outsourced to some distant land, zooming over the interwebs into the hands of people with names like “Steve” and “Bob” and “Tim” who, while being a little short on syntax and grammar, were nevertheless competent enough, after a few tries, to restore my database and get Ocular Fusion up and running again with nary a scratch. Throughout the ordeal, they repeatedly assured me that they would not stop until I was “TOTALLY and COMPLETELY satisfied.”

It was, frankly, a little exciting. I stir the pot every now and then, so surely this was some kind of targeted payback! Somebody wants to silence me–little ol’ me!–I fantasized. OMG, I felt so, so–significant!

I was told, however, that it was probably little more than a random hack, an attack as common as a cold virus, designed to take advantage of some broken lock on the backdoor of WordPress, probably carried out by a trolling bot and not the C.I.A., nor even a brilliant, pimply-faced teen with a Cheetos-coated keyboard and way too much time on his hands. Alas, my own personal Grassy Knoll melted into a puddle of paltry pointlessness.

Oh what a tangled web of wires we’ve weaved! The hive mind, lightning fast, uber-smart, the collective consciousness that hums and vibrates like a massive, nerdy nuclear reactor 24/7, threatens to undo us all.

And if you don’t believe me, just ask Curtis who lives on 5th Avenue North in Birmingham, Alabama. He’s the guy who bought Number Three Son’s stolen MacBook Pro from a “dude in West End” for $350.

Little did he know that Number Three Son and one of his fraternity brothers were connected through a program that Number One Son had installed on the MacBook called Dropbox, a handy application which holds forth the promise to “Simplify your life.”

Armed with the customary Glock, IP address, and positional coordinates, the detective assigned to the case petitioned the internet service provider company for the flesh and blood name assigned to the IP address. After the expected 4-6 weeks of wrangling with the ISP’s lawyers over so-called “privacy”, the company outed Curtis like a piece of bad code, and a warrant was issued for his arrest.

Not too surprisingly, Curtis was “well known” to BPD. As it turned out, he had an appointment at the court house, most likely with his probation officer, the very next day.

Curtis showed up right on time. The detective confronted him with the information and reminded him that things would go much better if he would turn around, go back to his apartment, fetch the smoking hot laptop, and bring it back to the station.

Curtis dutifully did so, and three hours later, Number Three Son had his Mac back. Of course, dear ol’ Dad had long since bought a replacement, so that means a Mac for me under the ol’ Christmas tree (actually, I’m already using it to, you know, write blog posts).

And if you’re still unconvinced from the stories of my hack and Number Three’s stolen Mac of just how connected we all are, for better and for worse, and how when you least expect it, some ghoul or other snoopy spook can show up on your computer screen and stare straight into your soul and ruin your day, and even your career, there is one more person you could ask: