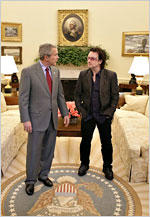 Yet another indication that President Bush may actually care about black people, contrary to what is popularly alleged, has turned up in the news. On Wednesday, the President held a lunchtime tete-a-tete with pop’s most famous human rights and AIDS crusader frontman Bono of the megagroup U2. Picking up where they left off at the G8 summit in July, the two discussed various topics including African AIDs relief, malaria control and world poverty.

Never short of chutzpah in the presence of world leaders, Bono has actually been very complimentary of Bush lately. In a Rolling Stone Magazine interview set to hit newstands today, 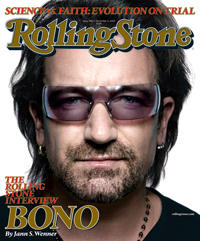 Bono praises the POTUS for his administration’s $15 billion dollar outlay for African AIDS relief, much of which is being used to purchase and distribute needed anti-retroviral drugs.… Read the rest

I know two or three of you are waiting with bated breath to read what I’m going to say after the demise of my beloved Cardinals last night. I was hoping that if we were destined to lose that we would at least avoid going “quietly into that good night.” Alas, we went not with a “bang,” but a “whimper.”

rally-squelching 2nd base umpire in last night’s game who somehow saw the “phantom tag”–you guys make a great team. I really do wish Houston the best, but I just want you to know that it’s hard for me to think of your team without thinking of the guy pictured to the right.… Read the rest