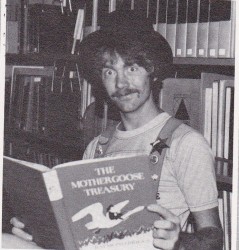 Pardon me, but does the goofy-looking nerd in the suspenders and top hat reading Mother Goose look like the type of guy who would strike fear in the hearts of murderous Ku Klux Klansmen?

And if you had asked any of us who attended Harding University in the early 1980s the same question and what we thought of the future prospects of Jerry “Boo” Mitchell, first-class clown, favorite chapel announcer and author of the somewhat subversive “Fifth Column” which appeared weekly in the school newspaper The Bison, we would have likely laughed and said something like “high school speech teacher,” or “radio talk show host,” anything, really, other than the Civil Rights version of Gabriel Van Helsing.… Read the rest

Here are some clips of Micah Armstrong during his recent mission trip to the University of Alabama as he riffs on the topics of:

By way of contrast, here’s a clip of N.T. Wright at Seattle Pacific University as he weaves a very different-sounding Christian narrative.

Like I said, two different men, two different tactics. It seems to me, though, that there’s a difference between being a “fool for Christ” and being a clown. No wonder everyone’s so confused these days.

The Last Days are in full swing at Bama.

Hypothetical question: if your only exposure to Christianity was this guy, do you think you would be interested in joining up?

Color me crazy, but somehow I think this guy might make more inroads at a college campus these days.