On 06/24/2020 6:15 PM MICHAEL BROWN  <                         > wrote:
Hi Bill,
Greetings from Alabama, where we strive to not only be #1 in college football, but new coronavirus infections per capita as well. Roll Tide.
I imagine Mark or “JN Armstrong” have already sent you this, but I thought I would pass it along just in case:  https://harding.edu/benson
Of course it could never be otherwise. I find it all very wearisome. However, I did take note of McLarty’s dismissive description of my literary quest for truth as a mere “newspaper article,” the subtext being, of course, “Fake news!”
People still don’t get it. It was never about Benson. It was about the 946. Benson was exceedingly ordinary, just like countless other white men of power who served the status quo (of segregation) and protected monied interests during that period.
The 946 were extraordinary. Benson just happened to be the antagonist standing in their way. It could have been any old Tom, Dick, or Harry, but in 1957-58, it was just plain old George.
Mike
On 06/25/2020 6:15PM MICHAEL BROWN <micbrown3@comcast.net> wrote:
Bill,
It was just a tiny pebble (or as Mr. Wonderful would say, “a newspaper article”) that I tossed into the Lily Pool back in 2012, but my how the ripples have rolled on. Big ol’ propagating circles as far as the eye can see.
Bill, I have a favor to ask. I am looking for a picture of the plaque with your name on it that I had placed on a seat in “The Benson” back in 2010, right before I contacted you. I think I sent a copy of it to you when I first wrote you.
I thought there was one on my old blog, but I was mistaken. I’m sure it’s on some old external hard drive that’s lying about, but I’m hoping that card catalog of a mind of yours will know exactly where to find one. If not, I’ll start doing some hard drive deep dives to try to salvage that little treasure.
Mike
On 6/26/2020 1:06 AM WILLIAM FLOYD <cataloochee@shaw.ca> wrote:
Here it is, Mike. It took me several hours to find it but I am not the type that gives up. 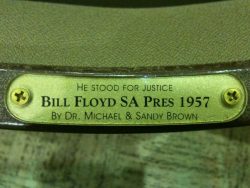 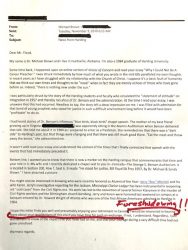 On 6/26/20 4:44 AM MICHAEL BROWN <idoc61@gmail.com> wrote:
Bill,
“I would be interested in hearing more about your recollections of this era if you have time for such an exchange.”
If one could attach a piece of music to that sentence, it would begin with the sudden report of a large bass drum followed by a steadily building stream of notes, the low rustling and murmur of brass and string, connecting, streaming, building from branch to stream to roaring river, calling to the listener, shouting, “Pay attention! Something is about to happen!”
Foreshadowing music.
That letter is as precious to me as the picture. I’m so glad to to be reunited with both. Time is our greatest asset, our most precious gift. Thank you for using several hours of yours to track these down.
And yes, I know you’re relentless. That’s why I asked. I can count on one hand the number of people who I would task with such a request.
Mike