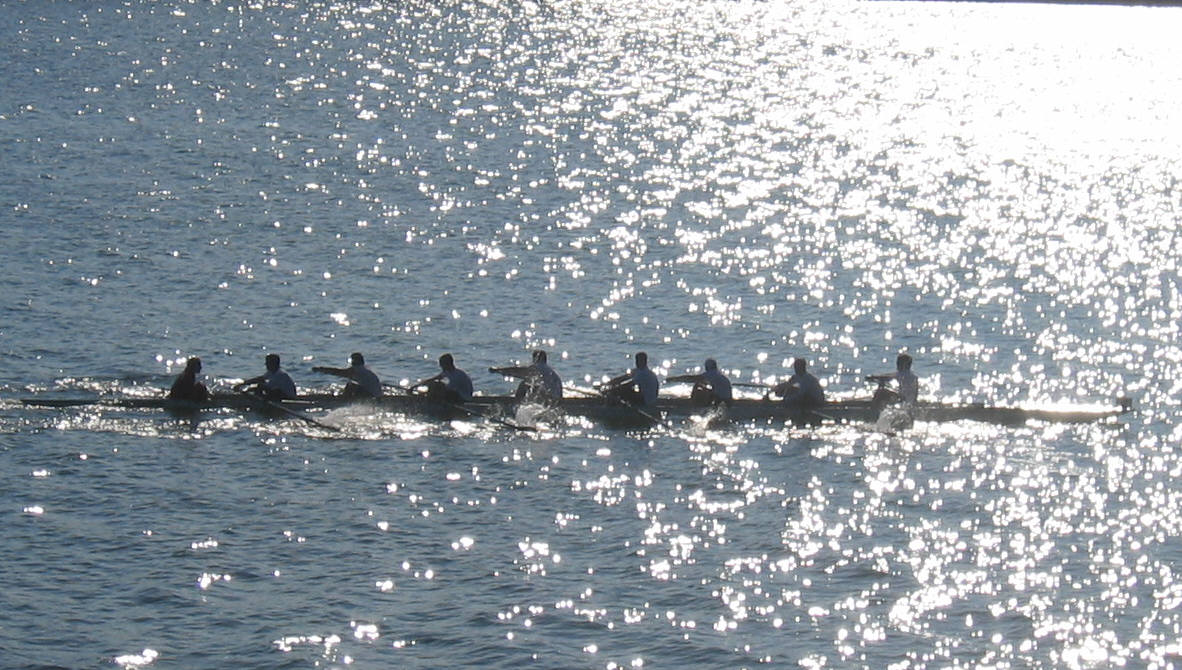 Saturday dawned, cool and crisp, autumn having finally made its official appearance in these Southernmost parts. Here summer begrudgingly lingers, sending forth its last waves of punishing heat even as the leaves suddenly turn brown (and only rarely yellow or red) and begin their free-fall toward the welcoming ground. Young and old alike consider this disorderly sequence, and the many dark, discouraging signs that surround us in these trying times, and we long for that first refreshing blast of cool. It perks us up. It gives us hope.

Among the pleasures of the past two days was the chance to sit on the banks of the Tennessee River and watch Number One and his University of Alabama teammates compete in their first regatta of the season. Several schools were there–LSU, Sewanee, Alabama and Auburn. Since the Barner crew was seated next to us, I turned up the volume on my radio a bit as Nick Saban inserted 365 lb. defensive lineman Terrence Cody into the game at fullback, where he proceeded to collapse the entire right side of the Ole Miss line in advance of Mark Ingram’s march into the end zone. They looked the other way and pretended to ignore my little taunt, but I know they were listening.

Number One’s boat did well for a new crew on their first cruise, slicing through the sun-dappled water with relative ease and efficiency. They were pleasantly tired as they hauled their boat out of the water moments later, but pleased with their first-time effort. Time and place were mere secondary concerns. What really mattered was the elemental pleasure of being on the water on such a glorious day, the camaraderie and the fellowship, the exulting in the vigor of youth while the time was ripe, before the days come when rowing against the stream is no longer some kind of metaphor, but instead a gritty and somber reality which dogs you every step of the way.

Well all that, and the score. “What is it?” they demanded as they lifted their boat out of the water and made a beeline toward the nearest radio.

Early Sunday, I met up with my own crew for our weekly long run. I’ve been struggling lately, feeling very tired and achy during and after my runs, and frankly I’ve been discouraged and wondering how much longer I can keep this up. But yesterday was a new day, and considerably cooler, and as I reached for my gloves, long-sleeve shirt (and yes, new shoes!), I bucked up a little and dared to dream of a pain-free run.

I settled in quickly, bobbing along like a rhythmic metronome, my running mates and I hashing out all manner of middle-age concerns, letting go, releasing our cumulative stresses and strains into the crisp morning air where they commingled with the diaphanous vapors and floated away.

My friends are all better runners than I am, several of them rugged, experienced triathletes, and they’re used to me lagging a little, to looking back, slowing down (Is he still there? Should we go back for him? Do you think he’s okay?) and waiting for me. But not yesterday. I kept the pace and at times even set it. “Nice run, Mike,” one called out. “What’s gotten into you?” asked another.

As we topped a hill near the end of our 7-miler, the rising sun hit us like a spotlight, warming our old, chilled bones, causing us to squint and lower our heads in homage. We passed a street where a family recently struck by tragedy lived, a house where a young mother was probably up at that early hour, grieving for her husband and wondering how she and her four young children were going to make their way in this life without him.

The sparkling dew was diamond dust to those of us who were alive and warmed by the rising sun. But for the widow, and for so many others, it was the thousands of tears shed and the thousands more to come.

I finished that run light as a feather but with the weight of the world on my shoulders. What do you do in the face of so much light and dark? How do you deal with the despair that lurks around every corner and down every street?

You face it all and offer up a thankful prayer for being alive. You take the day gently and humbly in your hands and treat it like rare and fragile glass. You push back a little. You row, run–whatever–against the stream.