Fact: Ghana is a relatively small, west African country with a population of just over 22,000,000 (49th in the world) and a GDP of $51.8 billion (77th in the world). Yesterday, they declared a national holiday and asked that all industries cut back on power usage, thereby saving enough juice to power the nation’s TV sets so that more of its citizens could watch the USA-Ghana World Cup match.

Fact: The United States of America is the world’s premier superpower with a population of 298,217,215 (3rd in the world) and a GDP of $13.05 trillion (Number One). Yesterday, most of its citizens were not aware that their National soccer team was playing Ghana in the World Cup, and even if they did know, they didn’t care.

I suppose I could stop right there, and that would pretty much say it all. But you know me. 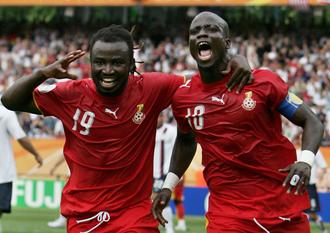 It was hard not to rejoice in at least a small way with the Ghanan team yesterday. The Black Stars have been magnificient and are the darlings of this World Cup so far. They played with nerve, passion, and deft, and in the end, their post-game jubilation was marked by a refreshing graciousness and piety (many prayed and gave thanks to “Wonderful Jesus”). My church has a strong Ghanan connection, and I wondered if some of the players on the pitch or fans in the stands were converts to the Christian faith as a result of missionaries whom I actually know.

Yes, I will be pulling for them against the Brazilians (remember, Plan B), and I would like nothing more than for them to extend their extraordinary run and bring glory and honor to their humble country. I say again, is there any other situation in which a poor, tiny African nation can bring a world superpower to its knees?

Now, back to the Americans. After watching Bruce Arena in post-game interviews, I will admit that I feel a little sorry for him. The only person who had a worse day yesterday than Bruce Arena was Larry Brown. I know soccer pretty well, and I’ve experienced just about everything that can go wrong in a tournament with my own teams that I have coached and supported, so there is some sympathy here on my part. Sometimes, no matter what you do, it just wasn’t meant to be. Soccer is a beautiful but fickle mistress–one moment she’ll treat you like a king and in the next instant turn her back on you in the cruelest of ways.

Still for all his talk of attacking, Arena kept the American attack confined within a conservative and stifling 4-5-1 formation, that lone striker being Brian McBride, a tough and inspiring leader, but nevertheless aging veteran, who didn’t have the legs to play a whole match. Why he kept Eddie Johnson, the team’s fastest striker, on the bench until the 60th minute yesterday and off the pitch for large segments of this tournament is a mystery that needs an answer.

As I’ve said before, Arena seems to show a certain loyalty to “old guard” players that is not dependent on their performance on the field. I have seen that happen at all levels with coaches, and the only solution in most cases is fresh blood and a fresh perspective. After listening to his post-match comments, a change in coaching seems likely.

Arena deserves credit for having raised the level of U.S. soccer over the past 8 years, and at times his management has been brilliant (to wit, the 2002 World Cup). But this was a team that was supposed to be our “best ever” and throughout this tournament, Arena’s decision-making has been suspect and lacking in the imagination, flair and necessary risk needed to compete successfully at the international level. It is time for a change.

The New York Times has an excellent summary of yesterday’s match, so I’ll refrain from too much review there. But I would like to note the one goal that the U.S. managed to score on it’s own, which was a beauty. DaMarcus Beasley has been one of the most criticized players on the U.S. team. He has played mostly uninspired soccer, which combined with his shooting off at the mouth after the Czech match, landed him a spot on the bench in the second match against The Azzuri.

However, yesterday he was back in his familiar left wing spot, and he broke loose from a Ghanan scrum and sent an artful, curling cross into the path of a galloping Clint Dempsey (who, I might add, may have been barely offsides on the play) who proceeded to finish with authority. The assist earned Beasley a large measure of redemption for earlier sins, and for Dempsey it was a moment that the boy-turned-man from Nacogdoches, Texas will replay in his mind till the day he dies.

Dempsey was a bright spot among U.S. players throughout the tournament. It’s a shame more of his passion couldn’t have rubbed off on players like Landon Donovan, whose lofty promise went unfullfilled after such a brilliant performance in 2002.

Also, a word about the penalty kick which German referee Merk Markus awarded to the Ghanan team in the 47th minute of the first half. As I noted in the comments from yesterday’s post, I found it surprising that a center referee of Markus’ caliber would change the complexion of the match in such a dramatic way short of a near decapitation in the box. However, it must be said that the whole scenario was set up by poor defensive play by the U.S., first by a poor clearance, and secondly by Onyewu’s watching the ball rather than his mark and allowing the Ghanan attacker to get goalside of him (“stay goalside of your mark” is the first rule of Defense 101).

After that, Onyewu was in the difficult position of having to head the ball away while trying to avoid contact with the Ghanan, who, sensing the opportunity at hand, proceeded to slow down and lean back into Onyewu, initiating contact. There was not enough there for a foul (as Arena correctly noted in his post-match comments, if that type of contact where called everytime, then there would be 15 PKs per match), but the Ghanan striker pulled off an Academy Award winning dive which Markus bought hook, line and sinker. Very disappointing, but watching the replay, it was a pretty convincing fall which at match speed was enough to fool even a referee of Markus’ standing.

Bottom line, though, the US didn’t play well enough over the three matches to deserve advancing to the final 16, so there was no grave injustice committed here. As Mike Lopresti writes in his USA Today commentary this morning, U.S. soccer fans at least have the consolation of knowing that it’s not just their particular sport that flops at the international level. Baseball, basketball and hockey teams representing the U.S. have also performed poorly in recent international competitions, and as Lopresti points out, watching a weary Arena in post-game interviews was a little like watching Larry Brown in Athens.

I’m not sure if the U.S. will win a World Cup in my lifetime. But my love for the game will not be dependent of the fortunes of the Stars and Stripes. There is something deeper and more compelling to this game than mere jingoism. Soccer is a common language that all the world can speak, producing a festival of goodwill and sportmanship that in my opinion now exceeds the increasingly complex and corrupt Olympic Games. It is the Great Equalizer, the foot-hold up by which a poor, tiny African nation like Ghana can climb into the world’s spotlight, and for a day at least, become a superpower of its own.