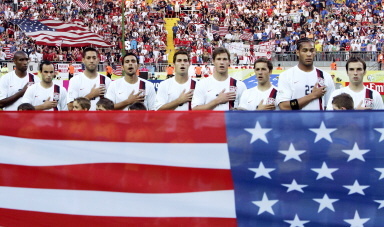 You may have noticed that whenever the players take the pitch in the World Cup, they always seem to emerge from the tunnel holding hands with innocent looking children bedecked in colorful, cheery kiddy-kits who escort their assigned player and remain with them through the playing of the respective national anthems.

So what’s up with that? I always figured it had something to do with promoting the idea of international brotherhood and goodwill, which of course is perfectly personified in the round, chubby, cherubic cheeks of little children carrying bouquets of flowers.

But then Eyegal (who always seems to see through my blindspots) came up with an interesting hypothesis: perhaps they’re there so that nobody will throw anything at the players. She went on to explain that practically nobody the world over (with the notable exception of al-Qaeda) will tolerate anyone intentionally harming a child. So if some rowdy partisan in the stands does decide to launch a cup full of Lowenbrau at the players as they pass through the tunnel, he would be immediately set upon by the crowd and disappear beneath the throng of vigilantes never to be seen again.

Could all this warm and fuzzy feel-goodness be nothing more than a ruse for a kiddy shield? Soccer has it’s share of hooliganism to be sure, but usually there’s so much security at the World Cup that it’s rendered harmless. Still, perhaps the roots of this tradition do go back to less secure venues where such a tactic prevented a face full of rotten tomato, or worse.

I don’t know, after the way the USA played this time around, I think we would have been just as well off by allowing our kiddy escorts to take the pitch instead.