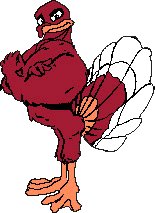 Hopefully by now your Thanksgiving bird is safely simmering away in a pan in preparation for the feast–and hopefully you have lived to tell the tale. As this disturbing image shows, turkeys are not the docile, lovable birds commonly depicted in popular literature and movies. No, they are fierce warrior fowl who would just as soon take an eye out with a razor-edged talon than to simply lie down in a pan and wait for everyone around the table to sing a paeon of praise about how juicy and tender this year’s “special guest” looks.

Having grown up in Southwest Virginia near the campus of Virginia Tech, I have known about the existence of these “fighting gobblers” all my life. One Thanksgiving, my father and I even marched around the woods near our home ostensibily on a search and destroy mission to bag one of these dangerous birds. I think I was around 10-years-old at the time and my father must have suddenly realized that I had not been on the requisite rite-of-passage hunting trip with Dad, so we squeezed one in during the hours prior to the Cowboys-Redskins game. Dad carried his .410 shotgun (unloaded) and tried to look like a serious hunter, but we mostly walked around in circles, having a good time talking loudly about this and that as the golden, red fall leaves crunched beneath our boot-shodden feet. I suspect we made a little too much noise for turkey hunters, but it was just as well since I’m not sure what we would have done had we encountered one of the fierce creatures anyway.

simply had the guy at the end of the register bag the bird in either paper or plastic. But keep an eye on that pot will ya? You know how those horror movies turn out–just when you think the monster is dead, you look up and…well, suffice it to say, be careful out there, ok? Oh, and be blessed and thankful for the good gifts of food, family and friends that God willing are yours this Thanksgiving Day, 2005.