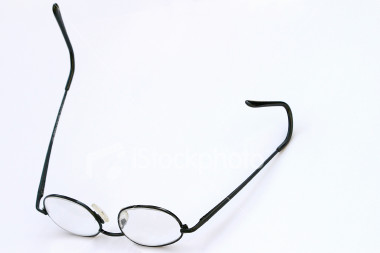 Sunday after church, I felt a large hand grab me firmly by the shoulder. I turned around and saw that it was one of our elders. Uh oh, I thought, what did I do (or more likely, say) this time? There I stood, a 40-something man, but I still felt like a little boy caught with his hand in the cookie jar.

No trouble this time, thankfully. The question was not “what did you do?” but more like “what could you do?” As in, “could you possibly go over to Huntsville Hospital and straighten out D’s glasses?”

D is a 14-year-old boy who was recently involved in a horse-riding accident. He was thrown, entangled in a rope which became wrapped around his neck and then dragged across a field by the horse. Three weeks later, he had finally been able to breathe on his own and was taken off the respirator. Amazingly, there were no broken bones or brain damage.

Now that he was awake, he needed to see, and he couldn’t because his glasses were mangled and bent and wouldn’t stay on his face. Our church has been assisting D’s family over the past few weeks, and recently his Mom asked one of our elders if he knew anybody who could stop by and take a look at her son’s glasses. Yup, he told her, I think I do.

Over the years, I’ve spent a great deal of time taking care of complicated cases in secondary and tertiary care settings and on staff at the local military hospital. I’ve seen my share of emergency rooms patients and done a few bedside consults in my time. But I don’t recall ever being paged to perform an emergency glasses adjustment, although there have been occasions when I’ve wondered if one might be necessary. Although most of the time such tasks would be handled by a technician or optician, this was a special situation and a special request. If there’s one thing I’ve learned over the years, it’s that sometimes the doctor himself needs to “lay hands” on the glasses to make everything okay.

So Monday I donned my clinic jacket and grabbed my glasses repair kit and headed across the street to the hospital (I hardly ever wear a white coat in my office-based practice, but I figured it would help me blend in better and get past the nurses). It took me a few minutes to locate the ICU. In fact, I had to ask for directions–twice. The last orderly gave me a funny look. I figured he must be scratching his head over the guy in a white coat wearing an official-looking ID badge who couldn’t find the ICU. Maybe he thought I was that new, hunky intern all the nurses had been raving about.

Once there, I found D’s Mom and introduced myself. I asked about her son’s condition and was pleased to hear of his progress. She said now that D was awake and more alert, he had been complaining that he couldn’t see with his glasses in their present condition. She felt that he could recover better if he could see more clearly (I nodded in agreement) and was glad that I was there. Together we entered the ICU and things were going smoothly, doctor and smiling family member striding together down the shiny porcelain-tiled corridor, a genuine Marcus Welby moment.

But then I saw a large shadow pass in front of me and there she was–Nurse Nazi. Every ICU has one. Her job is to brook no foolishness, stop trespassors in their tracks and seek out optometrists posing as staff doctors and destroy them. Cross Nurse Nazi , and you’re liable to end up needing a hospital bed yourself.

D’s Mom told her who I was and about my intentions. I introduced myself and stood there with my best “just-try-and-stop-me-if-you-dare” grin. She stood there, expressionless, and took several long seconds to look me over from head to toe (if she had been 30 years younger, I would have been flattered). Finally, brow furrowed skeptically, she rested her eyes on my ID badge. She looked confused; it was at that moment I knew I had her.

You see, there are four “Dr. Michael Xs” in town–a urologist, a gastoenterologist, a pediatric dentist and me. I could almost hear her thinking: I’ve never seen this guy before in my life, but I think I’ve heard of him and he does have an official looking badge and a white jacket and all, and in any case he probably knows the other “Doctor Michael Xs,” and if I kick him out I might get in trouble, and I need that like I need a hole in the head.

D was asleep, but he began to stir and awoke quickly when we all walked in. I placed the glasses on his face to see where we stood; they weren’t quite D.O.A., but the pulse was thready and bare. The left eyewire was kinked, leaving a gap between the metal frame and the plastic lens. The right temple was bent downward at an awkward angle, like a quarterback’s broken leg at the end of a bone-snapping tackle. With the glasses on, the left lens sat several millimeters further away from his face than the right. When you’re very farsighted and have amblyopia, or “lazy eye” as D did, several millimeters can make the difference between amorphous blur and clear, crisp vision. This wouldn’t be easy, but I’d seen worse.

I got to work, carefully bending the metal according to my will–shaping, balancing, adjusting–until finally the glasses fit snugly and naturally around D’s face, per their original design. He smiled and said that they felt better as he scanned around the room, his eyes landing on the TV in the far right corner. D’s Mom smiled too and thanked me for taking the time for a bedside glasses repair. I looked over at Nurse Nazi, and if I’m not mistaken, I think I even saw the trace of a nascent grin forming at the corners of her pink, pursed lips.

As I headed back to my office, I thought about what I had been privileged to do and realized how small it had been–a mustard seed-sized deed if there ever was one. I’ve certainly had more exciting sight and lifesaving adventures in hospitals before.

But as I hit the sidewalk in front of my building, it occurred to me that maybe small things, added together over time, can become quite large. As I entered the lobby of my building, I began to think about the legions the world over–mostly anonymous laborers whose efforts will go unnoticed and unreported–who are busy at the moment doing much larger works of rehabilitation and renovation than simply fixing a pair of broken glasses. By the time I opened the door to my office and threw off my clinic jacket (whew! I can’t stand those things!), I began to consider that all of us who seek to straighten out the bent things of this world are perhaps working in partnership with a creator who is busy performing the same task.

And then it hit me. Maybe the day is coming when all the bent things in this world will be straightened, and that every repair job performed in the here and now brings us one step closer to making that a reality. Now here’s hope: that this creator will eventually bend the broken and fallen world according to his will–shaping, balancing, adjusting–until it fits snugly and naturally around our souls, per it’s original design.