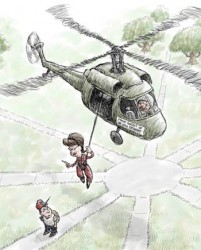 All across the country, parents are reluctantly cutting the umbilical cord and launching their youngin’s into the cold, cruel world.

Of kindergarten and college, that is. I’ve seen the evidence on Facebook: “Oh, ever since (insert beloved child’s name here) was born, I’ve been dreading the day we would send him/her off to kindergarten/college. I can’t believe how time flies!”

The New York Times has weighed in as well, documenting the rise of “parting ceremonies” on college campuses designed to give parents the not-so-subtle hint that it’s time to “hit the road” rather than hang around for a week at a local hotel and show up on campus each morning to escort Little Junior to class to check out the suitability of his professors, not to mention the laundry room to make sure he knows how to insert his “Action Card” into the slot and separate whites from darks.

And if you don’t believe me, listen to this Tweet from a college professor friend of mine at my own alma mater (Hail!): “HU freshmen parents: I know it’s great to be at Harding but please go home. We’ve got it from here.”

For the record, Eyegal and I are not known for being “helicopter parents.” Number One Son has nominated us for the “The Least Involved Parents in the World” award which I’m guessing he meant as a compliment although it looks a little funny at first glance. That translates roughly to “Find your own way, boys, but whatever you do, don’t wake us up at 2:00AM to bail you out of jail.”

So far, we’ve only had one relatively mild violation of that rule.

Two of ours are out of the house and off to college and only boomerang back occasionally to pet the dog and ask for money. Number Three Son is starting to pick up on the hint–probably best conveyed by his parents’ passionate embraces in the kitchen while he begs for dinner–that “ya know we love ya to pieces and all, but this whole ’empty nest’ thing is sounding better and better so could you step it up please, because your mother and I got plans.” Completely on his own, he decided to enroll in a program that will enable him to take classes at a local community college while finishing up his senior year of high school. If all goes well, he’ll have around 20 hours of credit and a diploma come next May.

Seriously, though, sometimes our kids do need a little help navigating The Road of Life and Eyegal and I are glad to help out and play the parental GPS–from a distance, by cell, text or Skype, and before 10:00PM.

But every now and then, you gotta go all Special Forces and break bad on some heads.

Case in point, when we took now college sophomore Number Two Son to his orientation at the University of West Florida last summer we tried ever so hard to “stay out of his bidness.” He was thinking that he might want to major in psychology (just like his parents!) and that he wanted to consider a health career such as physician assistant. He was a little skiddish about taking a pre-health science course his first semester, so we told him that we thought he should take Psychology 101 right away to see if he liked the field and save biology until the spring semester. You know, basic, common sense advice, the kind his parents are known far and wide for.

When the time came to register, parents were kept at a safe distance from the entering freshman so as to avoid too much meddling, and off the greenhorns went, lining up in a chute like cattle at the slaughter house. As far as I can tell, the conversation between Number Two Son and his so-called “advisor” went something like this:

No. 2: “I think I’d like to major in psychology and maybe be a physician assistant, so I’d like to take Psychology 101 but no science my first semester since that kinda freaks me out a little.”

Advisor: “That sounds like an excellent plan. Let’s see what we have here…hmmm…I know, let’s put you in Botany 101! I took Botany 101 my first semester and absolutely loved it!”

Advisor: “Yes, it’s all about plants and yes, most definitely, you’ll need it to be a PA. Which, by the way, what exactly is a PA?

Advisor: “All those sections are full. Sorry.”

Advisor: “Have a good semester and welcome to West Florida!  NEXT?”

You get the picture. And you can imagine our reaction when we picked him up later that afternoon and laid eyes on his printed schedule.

With Number Two rolling his eyes and cringing in the back seat, Eyegal and I donned our Black Hawk helicopter helmets and night vision goggles and swooped down on the registrar’s office (thump, thump, thump!). As we flew into the kill zone, uh, I mean, the room, the rotor wash sent papers and hair flying in all directions.

Well, actually Eyegal entered the room and I stood in the hall and guarded the door. She’s much better at that sort of thing than I am. Woe be unto anyone who messes with one of her babies. “Mama Grizzly?” Ha! Eyegal makes Sarah Palin look like a cuddly koala.

Needless to say, the schedule was “fixed” (well, waddya know, there is an opening in Psychology 101!).

All this to say that sometimes you gotta hover a little–but not for too long.

As for you long-suffering professors and college administrators, suck it up. The fact is, that just because you’ve got more letters behind your names than alphabet soup has noodles doesn’t mean that you always know what you’re talking about.

Besides, last time I checked, you need our money, which I guess, makes us your customers.

And the customer is always right.