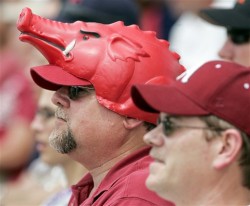 All day long I dream of sausage (and BACON!!). I just can’t help it.

It started last Friday on the drive from Huntsville to Durham, North Carolina where we witnessed a Man (as in Saban)-made disaster: a towering tsunami sweeping over and flooding the horseshoe-shaped bowl of Wallace Wade Stadium, turning it into a mini-Bryant Denny for a day and coloring it all houndstooth and crimson.

I should have been focusing on the game at hand, but I couldn’t avoid looking ahead after I spied those bronze memorials of a mama pig and her little piglets in the plaza in downtown Asheville. I don’t know what spirit possessed a sculptor to make such swine-honoring statuary or the City of Asheville to place it there, especially considering all the 20-something, vegan hipsters and the graying, pony-tailed 1960s countercultural types wandering past the ornately-detailed Art Deco buildings on a sunny, fall day. Surely, there must be an interesting piece of history there.

It continued the next day as we walked down the rolling paths and beneath the shadows of the tall pines on the campus of Duke University, past small huddles of Duke and Crimson Tide fans breaking bread together before battle (this was obviously not an SEC rival game), mixing their respective colors into a most pleasing and peaceful palette of crimson, white and blue.

Duke University and their fans were the most amazing and gracious hosts, despite the beatdown they knew was forthcoming. As we strolled past, the aroma of various deletable sausage dishes, and even the occasional whiff of bacon, teased and tickled our nostrils. I have no doubt that if we had walked up to any one of those Duke fans and said, “May we have some sausage, please?” that they would have gladly shared.

We left the game early in the 4th quarter as our 3rd and 4th (yea, even 5th) strings mopped up. We wandered past storied Cameron Indoor Stadium and the long line of Blue and White tents dotting Krzyzewskiville, some of which were filled with pleasantly buzzed Blue Devils who for some reason had never made it to the game.

There was a large, portable BBQ rotisserie grill on our left where an entire pig had been slowly roasted to porcine perfection. Only remnants now–and the head. Its snout was flared but still, and the round, lifeless eyes stared blankly into the void. There was a woman, a Bama fan judging from her matching, head-to-toe crimson attire and accessories, standing there taking a picture of the unlucky hog with her point and shoot camera.

I knew what she was thinking, that she was already looking forward, too. I thought about taking a picture as well and then reaching into that grill and grabbing a few stringy pieces of pork to munch on during the walk back to the car. But I knew that I had probably embarrassed Eyegal enough for one day and thought better of it.

But it really goes back further than last week–I have a long and meaningful relationship with sausage (and BACON!!). Early fall always brings on the thick memories of my childhood, of my grandmother standing there in her long, gingham dress and matching bonnet, stirring her homemade apple butter in a large black cast-iron pot like some intoxicating witch’s brew. To this day, if someone sets a plate full of toast and a mason jar filled with Virginia apple butter in front of me, I go totally hog-wild.

But it’s mostly the screams and squeals that I remember the most. They came from the pig pen which was located next to the small, frame building housing my grandfather’s small, but very effective, sausage-processing facility. It was there that he and several of the men from the neighborhood would gather each fall and slaughter the hogs, turning their otherwise smelly, pigly selves into fresh, delectable patties that practically melted in your mouth. It all seemed a little gross to me at the time, but when I grew up and learned about the Greek pantheon in school, I eventually came to regard fresh, homemade sausage as ambrosia, the food of young, powerful gods.

Once, when I was about 5, I dared to peak inside the building where the men were busy cutting and grinding their fresh kill. My grandfather spotted me and decided to have the kind of fun and sport which made for good laughs in those days. He reached into his pile of remnants and pulled out a pig’s tail and began to chase me with it.

My memories are a little fuzzy after that, but I do seem to recall issuing a squeal of my own and running back into the yard near my grandmother who was stirring her cauldron of sweet, brown goo with a long, wooden stick. Perhaps I felt she would protect me since she typically didn’t brook any foolishness from her man. But this was the same woman who once placed me on the back of one her more feisty heifers and slapped its hindquarters, causing it to bolt and me to let out a whelp.

Looking back, I think they were a little worried. Having grown up close to and depending upon the earth with all its treasures and terrors, I believe they had looked on at their young, bookish grandson and feared that he would forever remain a pale, “inside boy.” It was just their old-fashioned way of nipping that in the bud.

As much as the sights, I remember the smells. The pungent aroma of burning wood and fresh blood mingled with the smell of sweet fruit and wafted together on currents of crisp, fall air, products of God’s good earth fulfilling their preordained purposes and reaching their ultimate ends. They were icons for those with eyes to see, symbols of both the cornucopia of this sweet life and our own teleos, the bottom line fate that awaits us all.

But that’s enough philosophizing and reminiscing. When you get right down to it, I have no idea why I start dreaming of sausage (and BACON!!) around this time of year. Ultimately, it’s a mystery for the ages.

Besides, the moment is now, and in this moment I am very hungry. If you’ll excuse me,  I most go seek out some breakfast.