“Life moves pretty fast. If you don’t stop and look around once in a while, you could miss it.”

I was recently voted Most Likely to Produce Killer Reunion Name Tags by my high school class.

Now that may not sound like a big deal, but I consider it quite an honor. Especially compared to the Senior Superlative I received when I was actually in high school–Most Studious.

Yeah, yeah, I know, knock you all over with a feather. Yup, if there’s one way to become King of the High School Hill and get the girls, it’s to be known as Mr. Studious, the short, skinny Geek with the biggest backpack, the one shown in the senior yearbook sitting with Ms. Studious at a library table piled high with books, holding his chin in a philosopher’s pose like some Aristotle in that famous Raphael painting, “The School of Athens.”

Add to that the curly, white guy Fro I rocked back then, and Ferris Bueller had best start checking his six. The Eyeguy is back in town.

Or at least I will be soon as I head up Virginia way to take part in the Franklin County High School Class of 1980 30th Reunion festivities in Rocky Mount and Roanoke. We’ll be kicking things off with a pregame tailgating party prior to the football game Friday night (unlike when we were in high school, we fully expect to win) and then the main event the next evening. I’ve attended the 10th and 20th reunions and had a great time, and this trip will be my first to Virginia since we auctioned off Mom’s house and property in August, 2009.

I suspect “bittersweet” won’t even begin to cover it.

I had a good friend a few years back describe the cycle of high school reunions well, I think. He was about the age I am now and had just attended his 30th. He told me that the 10th reunion is still about posing and bragging and mulling over old wrongs that were never righted, but might be now if you just flashed enough bling or cleavage.

Soon you reach your 20th, and by that time kids (and hilarity) have usually ensued. You start to realize you don’t have all the answers anymore–like you ever did in the first place.

By the time the 30th rolls around, the steady torrent of life has smoothed off the sharp, rough edges. You look at your classmates a different way now-as fellow travelers and survivors. Basically, he said, you’re just thankful to be alive.

I looked at my classmates a lot this week as I scanned and cropped those senior “environmental” shots. Many of them included special, individualized props such as Panama hats, cherished pets, and more than one motorcycle (hey, it’s Franklin County). I aimed to trim those as much as I could (sorry, Susan, I couldn’t quite crop black kitty off your shoulder) and focus on their eyes. Young, clear eyes, staring straight ahead into all that hope and promise.

And that’s when my own started to well up a little. Now I promise to do more laughing than crying this weekend, but as I cropped and pasted, I had to pause every now and then and reach for the Kleenex. Sometimes the memories were so thick and the melancholy so heavy that I had to take a break and get up and walk around.

For most of us, life had not turned out exactly like we planned back then. In some ways it’s been better, and in others, worse. We’ve staggered and reeled from a few of life’s licks along the way. Increasingly we stoop and sag, gravity now more than a mere theory in Mr. Handran’s AP Physics class.

I looked into the eyes of my classmates, and I think that I felt something that could best be called love. It’s the same love that I should have had for them back then but was just too busy trying to survive and thrive to dare show. 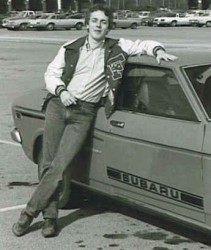 It’s a love that takes 30 years in the School of Hard Knocks to season and grow. There are some things in life you can’t learn in a classroom and that the ACT can’t test.

One thing has changed for the better for sure. When I get ready to go to the football game Friday night, my date for the evening will not call me a few hours before kick off and beg off because “she has to wash her hair.”

Ladies, for the record, “impending nuclear holocaust” is a much more plausible excuse for breaking a date than “washing your hair” (let it go, Mike, let it go).

And if I wear my flannel and beret to the game Friday night and some jerk fan from the opposing team stands up and shouts “Go home, preppy!” just like they did back in 1978, I will not run in the opposite direction and try to hide in the crowd like I did back then.

No, life moves too fast to let an opportunity like that pass. I will heed Ferris’ call and slow things down. I will stop and turn toward him, proud and confident, well-seasoned now and soaked in grace, and say, “Yes, I am that man.”