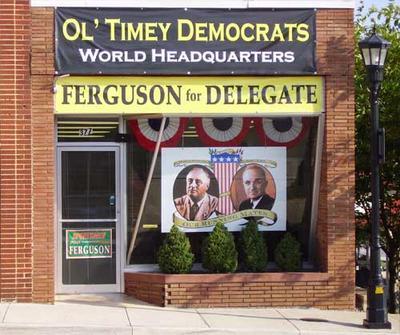 In a curious case of life imitating art, my old high school friend Eric Ferguson has decided to borrow a few pages from one of my favorite movies in his bid to unseat incumbent Republican Allen Dudley in the Ninth District race for the Virginia House of Delegates.

It’s an interesting time to be a conservative Democrat in Southwest Virginia. The fine, salt of the earth folks there don’t care much for either Blue State, tree-hugging progressives or button-down, country club Republicans. So, what’s a good conservative Democrat to do? Why you fashion yourself the “Pro Guns, Pro People” candidate and conjure up the ghosts of FDR and “Giv’em Hell” Harry Truman of course!

Eric is hoping to whip the “Ol’ Timey Democrats” of the Ninth District into a voting frenzy by giving them what they want: guns, Blue Grass music (including an appearance by Dr. Ralph “O Death” Stanley), lots of NASCAR, but most importantly, the memories of simpler times and “Happy Days”–and the hope that maybe it could be that way again.

It appears the strategy may be working. Inside sources (my mom and sister) tell me that the local high school auditorium was filled to overflowing for the Stanley concert and that practically every piece of yard art in Franklin County has been papered over with “Ferguson for Delegate” signs.

Eric is a fine guy who will do a great job if elected, and I wish him the best. I do have one gripe to relay to my old friend, though. I know that Ben “Cooter” Jones and the General Lee were a big hit with the folks back home, but you left out one very important individual. Where’s the midget with the broom?