Did Dr. George S. Benson apologize for his racism?

That was, without a doubt, one of the first questions that came to mind among the leadership at Harding University when the online petition to change the name of the campus auditorium from George S. Benson Auditorium to Botham Jean Auditorium dropped in June 2020.

I also believe–very strongly–there was a “Drop what you’re doing!”, five alarm fire, all-hands-on-deck search for an exonerating piece of evidence that would have shown that George Benson apologized, showed remorse, or otherwise recanted the obviously racist views that he held and expressed openly in the 1950s and 60s.

Well, they passed a law in ’64
To give those who ain’t got a little more
But it only goes so far
Because the law don’t change another’s mind
When all it sees at the hiring time
Is the line on the color bar, no, no

During the academic year 1954-55, an unknown person in the Harding College (now Harding University) admissions office received an application from a young man named Wilbert Neal Whitley who lived in Council Bluffs, Iowa.

Tokens transcends mere entertainment, ascending instead to the level of education, even enlightenment.

Bottom line, I can’t be sure. What I can be sure of: Nine hundred and forty-six Harding students, faculty and staff did, and I’m proud of each and every one of them and thankful for the progress that my alma mater has made since those difficult days.

Ain’t it like most people? I’m no different
We love to talk on things we don’t know about

In a perfect world, each of us would have both a personal trainer and a personal editor; the former for our obesity, the latter for our verbosity.

I’ve seen America fatten right before my very eyes. As a grunt on the front lines of primary health care over the past 25 years, I know first hand the effects of increased sedentary lifestyles and the “cornucopia” of processed and fast foods available at nearly every turn with just the swipe of a credit card. 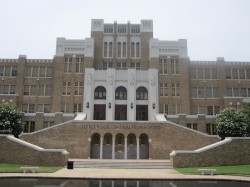 Instead, I visited Little Rock Central High School in Arkansas, where nine black students, aka the “Little Rock Nine,” dared to enter her shiny portals of learning in September, 1957, thereby ending ending racial segregation in Little Rock public schools. They were blocked on the first attempt by Arkansas National Guardsmen acting under orders of Governor Orval Faubus who had sworn not to allow the black students to enroll.