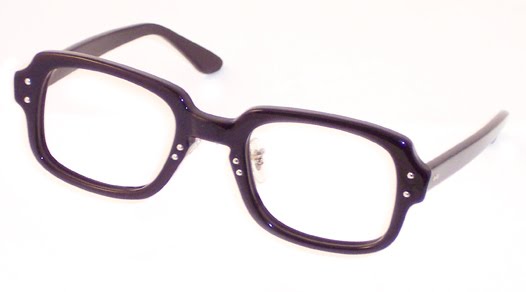 I first heard the term “Birth Control Glasses” or “BCGs” in the early 1990s when I started practicing optometry with the US Government. I was around 30 years old, married, with two sons and one on the way. Fortunately, I had already “spread my seed.”

Because if I hadn’t, I feel sure that merely touching those brown, butt-ugly, godawful, googly-eyed monsters would have struck me impotent. When I first laid eyes on them, I understood immediately why a whole generation of young men had dodged the draft and sought refuge in Canada.

For decades, military-issue eye wear has been as much a rite of passage for new recruits as screaming drill sergeants, 5:00 AM PT and MREs. Uncle Sam, in his infinite beneficence, would provide a couple pairs of these (free!), along with gas mask inserts, for all recruits requiring visual correction.

These frames were designed for extreme field conditions and the heat of battle, not the kind of “action” one might be seeking in a local club or dive bar while on weekend pass. Combine them with a pair of impact-resistant polycarbonate lenses and you had yourself a pair of “rough and tough” glasses that would perform well when tested by a small rock kicked up by a passing Humvee, but with a bullet or IED, not so much.

For several decades prior to the 90s, the frame of choice was a black, horn-rimmed style which, following the typical regurgitating cycle of fashion, is once again coming into vogue in boutique eyeglass shops. But by the time I was on board, that frame had been replaced by the S9, a thick, amber-brown frame with rectangular rims rounded at each “corner.” There was a female version, too, slight smaller and more rounded, but still guaranteed to turn even the most comely face into an “Ugly Betty.”

Like the unflattering standard-issue uniforms and haircuts, BCGs were intended to break down the individuality of raw recruits and “even the playing field,” making young minds and bodies all the more pliable for molding to the mission at hand. They were supposed to be “good for you,” placing them in the same league as pushups, cod liver oil and self-flagellation with a cilice.

Recently the US military announced that that they were retiring the S9 and replacing it with the smaller, infinitely more hip 5a, launching a wave of commentary and nostalgia to which I am not exempt.

These new frames should better suit the tastes of new recruits who don’t want to sign away their procreative prospects just because they volunteer to serve their country. The 5a will  not only be lighter and more comfortable in the field, but also “greener”–the savings on plastic alone should be enough for the Pentagon to fund their future cuts and not miss a single bullet or bomb.

“Back in the day,” I prescribed and fit a lot of S9s on many active duty Army soldiers who were fresh out of boot camp and assigned to a local base for further specialty training. Some already had their BCGs and just needed an updated prescription. Others who had lied, cheated and squinted on the entry-level eye test in order to avoid them had been busted and frog-marched to the eye clinic by their First Sergeants for their first pairs.

The boys’ faces were fresh and smooth, their heads mere nubs wobbling awkwardly atop bony shoulders. The girls, likewise, wore closely-cropped hair, their large round eyes and lovely faces framed by functional, “towel and dry” dos instead of the latest fashion cuts. All of them were freshly-scrubbed and sharply-creased, polite to a fault with all their “Yes Sirs!”, an odd appellation for a young doctor like me only a few years older than most of them.

We would laugh and joke around when I would hand them their BCGs, trying to make the best of a bad situation. Some vowed to save their pennies from the meager pay checks and eventually go out and buy their own. Others would simply sigh and put them on, accepting this latest indignity along with all the others.

Many were homesick, hungry and exhausted but trying so hard to fit in and do their duty. A handful were so stressed out that they experienced a form of psychological conversion reaction which caused their peripheral vision to collapse into small, dark tunnels. They had lost all hope, and the light at the end seemed so far away and hard to follow.

For the most part, they wouldn’t complain and were often unaware of their condition. When I would inquire as to what was going on in their lives and tell them that what they really needed was counseling and not glasses, many of them were surprised, some even ashamed.

I would send them back to their sergeants with the recommendation of psychological evaluation (there was no right to privacy) and always wonder if they would really get the help they needed and not just extra duties. Sometimes, as they would leave the clinic and walk slump-shouldered down the hall carrying their medical records, my heart would break.

No doubt many of those freaked-out young soldiers got themselves “squared away” and went on to distinguished careers. Some stayed stateside, others shipped out to far-flung places. Some came home and stared, mouths agape, through their googly-eyed glasses at babies they’d never seen, the proud products of prophylactic “failures” (BCGs are hardly foolproof during periods of imminent deployment).

I always tried hard to get their prescriptions right, knowing that sharp, crisp vision could possibly save their lives. But in the back of mind I knew that someday, for an unlucky few, the last thing they would see through their BCGs would be the face of the enemy and the flash of a rifle muzzle or roadside bomb.

I mostly see veterans now, and while many are relieved to find the latest fashion styles on my office frame board, there are a few old schoolers who go straight for the one pair of BCGs that I still keep around.  Old habits die hard, I guess.

Sometimes when I look at BCGs, I have this vision. It’s of young soldiers, precious blood and treasure, being sent off to war only when absolutely necessary, as a weapon of last resort. I see more of them staying home and doing what young people are supposed to do: growing up, making love and having babies. I see them becoming veterans who wax nostalgic about BCGs and the “good old days” when everybody looked like a dweeb but nobody cared because they were all in it together. Hooah!

Perhaps we should keep some BCGs around and pass them out to the politicians and powers that be the next time there are rumblings of conflict. Then they could take off their war-colored glasses and see the world through the eyes of the soldiers, airmen, sailors and marines whose lives they hold in their hands.

Who knows, maybe their new ocular prophylactics would enable them to spot more paths to peace and break the cycle of endless war.

Until then, I’ll keep grinding out those prescriptions and staring down that long, dark tunnel, following the small light of hope as best I can.