I wish I could report that my pursuit of Bill Floyd was a frenetic, APB, BOLO, coast-to-coast manhunt, that I was Deputy U.S. Marshall Samuel Gerard to his Dr. Richard Kimble, but I would by lying.

Instead, finding Bill Floyd on the morning after Jerry Mitchell gave me an encouraging nudge to pursue the story and track down its principle protagonist was as easy as walking into the Alumni Office and asking for his contact information. As I left with his address, email, and phone number in hand, I felt a little like “the dog who caught the car.”  Now what?

Fortunately, a few months back I had been thinking ahead, and I already knew the answer.

Earlier in 2010, Harding University had announced that contributors, for a modest sum, could dedicate a seat in Benson Auditorium to the loved one, friend, organization, cause, or champion of their choice. At the time, I was already mulling over the idea of researching and writing a story about the Statement of Attitude (SoA) and its signers.

Even if I never get around to it, I thought, Bill’s story means a great deal to me. It is “meet and right” to dedicate a seat to the nettlesome young SA President who led the effort to desegregate the school in 1957 in the very building named after the man who was off-footed by a group of students he could not control, became disoriented and strayed from his

lane (a harbinger of his driving to come), and invoked a tenuous case study from the field of ornithology to illustrate his racism when he should have just left matters of biology to the up-and-coming professor Dr. Jack Wood Sears.

I love irony as much as the next person, and this prospect was sauteed in and dripping with it. 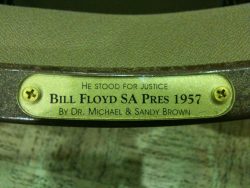 So my wife and I ponied up the cash and faster than a bursar’s cash register can go “Cha-ching!” Bill Floyd’s dedication plaque found a home on the top edge of Seat 6, Row T, Section 200.

I envisioned it as being like one of the many thousands of historical road markers and memorials dotting the highways and byways of America, the kind that commemorate some known or obscure “so-and-so” who once was born, stood, spoke, crossed the creek, fought, or died–right here where you’re standing now.

We normally blow past them doing 90 mph on our way to nowhere in a hurry.  Occasionally we stop to change a diaper or flat tire, pee behind some dense foliage, or eat a snack at the nearby picnic table if it’s a nice day, and we finally read them.

There’s a lot of fast-moving traffic in “The Benson,” too, but I knew sooner or later someone would sit down long enough to read that plaque, even if it was a bleary-eyed freshman texting her friend in the balcony during chapel (a heavenly experience she would look back on and pine for in later years–or so she was told) who, while waiting for the 3-dotted “typing awareness indicator” to clear and birth a new message, would look up from her device just long enough to read the words, “HE STOOD FOR JUSTICE: BILL FLOYD SA PRES 1957,” and think, huh, I wonder what that was all about?

I also knew if I ever located Bill and contacted him, it would be prudent not to show up empty-handed. Not that he would prove to have a sovereign-sized ego that demanded a tribute before I could approach (far from it), but the gesture would demonstrate I had spent some time reflecting on the story and its meaning and was serious about pursuing the truth, even if I wasn’t quite sure how to go about getting it.

As history shows, my tactic worked. I baited the hook, found my man, and reeled him in. As Jerry Mitchell predicted, everything else started to fall into place.

A good friend asked me recently regarding my blog restart: “What are your objectives?” Then he listed some possibilities as he saw them. It was a good question and one I have spent some time reflecting on and attempting to answer over the past few days.

Firstly, I am not an activist who is heavily invested in Harding’s present day soul and has a well-defined goal or desired outcome with regard to renaming a building. However, I am interested in hearing the voices and stories of those who are.

I am not black, a woman, or gay; I am a straight, white male. As such, my path at Harding was smoother than the road traveled by other fellow alumni and classmates. In addition to my own essays and stories, I hope to use this rebooted platform as a microphone for the under-heard to broadcast and amplify their own messages.

I am not a professional journalist or trained historian whose investigative and critical work will right a criminal wrong or deconstruct and upend long-held hagiography or dismantle myths. I have been lucky enough to work with a few true professionals in those fields, and even cited by some, but in the end, I’m “just an optometrist” with some persistence and a knack for showing up at the right time and asking good questions and then following what is in front of my own nose toward a working theory or tentative truth.

I most definitely am not a Christian prophet. I came to realize many years ago, even before the most recent example of the bastardization of American evangelical Christianity in the form of the slavish personality cult of the modern-day American Caesar Donald J. Trump, that had I not been raised a Christian, I would not have been “converted” as an adult.

Instead, I would have taken a pass on American Jesus (along with his dirty-rich pimps and duly-elected mouthpieces) and chosen to simply live a life centered around the common good and otherwise wing it on “whatever comes next.” In recent years, for the sake of sanity and clarity, I have put together a pragmatic, syncretic tool belt of ancient liturgy, common prayer, and Stoicism to make sense of a world turned upside down and shed some light on a path forward.

I am a Southern born and bred, for better or for worse, writer and storyteller, a lover of difficult and grotesque, gun-to-Grandma’s-head truths which a favorite writer of mine Flannery O’Connor (a figure whose executors, editors, and exegetes are now dealing with her own struggles with race and legacy) saw as the most difficult, but surest path to redemption.

I long for more justice while there is still daylight and before the night comes, but I don’t presume to know exactly what that looks like with every wrong that needs setting to rights. I suppose it could mean the removal of a name from a building, the repentance and restitution that flows from a serious reckoning with one’s past, or both. At the very least it should be something tangible, authentic, and exist in 3-dimensional space and not consist of mere promises that float like thin words dissipating into ether.

My friend concluded, “What do you want?

The way I see it, I want one thing: to make sure the story of The 946 keeps on talking for as long as it has a voice, and if all goes as planned, to add even more numbers to that “great cloud of witnesses.”

Like US, Deputy Marshall Sam Gerard, I have one job.  As for all the rest of it: I don’t care.

Maybe I am the old dog who caught the car, after all. Unable to extract my teeth from the tire rubber, I am now not so much the pursuer as I am the dragged.