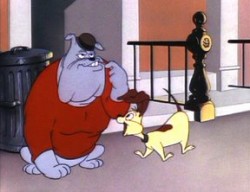 The recent national conversation on bullying has–no surprise–sparked a nostalgic neuron or two inside my rapidly-balding head.

I was an easy mark for playground bullies at Burnt Chimney Elementary School in the late ’60s and early ’70s. I was short, nerdy, carried more than my share of baby fat, and I cried a lot. By the time I was in 3rd grade, I was nearsighted and had to wear glasses, the only one in my class. To make matters worse, whenever a wasp flew in my direction, I would try to make it “go away” by holding my breath until I nearly passed out.

I was a country boy, but you sure couldn’t tell it. Clearly, I had issues.

I managed to get through 1st and 2nd grades without too much torment, but when 3rd grade rolled around, I suddenly found myself sitting near a couple of bullies. We’ll call them “Spike” and “Chester” after the bullying bulldog and his fawning, terrier sycophant of a sidekick from the old Warner Brothers cartoon. Now Chester wasn’t such a bad guy when he wasn’t around Spike, but when the two were together they were constantly looking for “a cat to beat up.”

Burnt Chimney Elementary School was a corpse-littered, dog-eat-cat Darwinian back alley in those days, and I was one slow-footed Sylvester. Everywhere I went, my predators stalked me. When I spilled my milk at lunch, they jeered. When I struck out in baseball, they cheered. When I dared go into the boys’ bathroom to take care of my business, Spike and Chester would stand behind me in line at the urinal, bumping up against me, breathing down my neck and calling me every name in the book.  When I accidentally split my pants doing the broad jump for our physical fitness tests, they were on me like sharks on blood, leading the crowd in taunts.

My teachers held them back some, but really there was only so much they could do. Try as they might, they couldn’t eliminate it completely. It was up to me to ride it out and try to survive. It made me mad more than anything, and I looked for ways to push back.

There were a couple of key events that helped turned the tide. One afternoon I became ill and threw up in the nearest trashcan, the penultimate elementary school indignity. Of course, Spike led the class in “Ewwws!” and had a few smart-ass remarks to make about that.

When my mother came to pick me up, my teacher Mrs. E. told my mother about Spike and what he’d said. She then turned her back and walked away while my mother, the same petite, meek woman who taught the story of Noah’s Ark with rainbow-colored flannelgraph animals, proceeded to tear into Spike with a flourish of roundhouse, one-two verbal punches and a fire in her eyes that I hadn’t seen since I broke her favorite vase back in ’67.

That incident had resulted in a “switching” for me. I’m pretty sure if my mother had asked if she could spank Spike with that aerodynamically-drilled paddle which my teacher kept in the bottom drawer of her desk,  Mrs. E would have “left the two of them alone” for a while. As it was, Spike could hardly face The Wrath of Mom. He hung his head and avoided her eyes, his own starting to brim with tears.

By 4th grade, my Dad had become concerned enough about the future prospects of his chubby, pale, “inside boy” son to buy me a set of barbells and to build me a basketball goal. I tried them both and liked them. When Dad came home from work in the evenings, we shot baskets together. I began to eat fruit instead of peanut butter crackers for my bedtime snack. I started to run laps around the house. Before long, the baby fat began to melt away.

It was that same year that our teacher developed an inside game that determined everything from who got to go to the cafeteria to pick up afternoon ice cream to who was first in line for recess–“eraser basketball.” We would stand single file on a mark about 10 feet away from the trashcan and try to toss in three erasers–single elimination, survival of the fittest.

Spike was good, but soon I was better. I still remember what he said the first time I beat him: “I can’t believe he just did that.”

Believe it Spike–it wouldn’t be the last.

The next year the action moved outside to the real basketball court. We divided into teams and leagues for each sport that year, and when basketball season rolled around, it was my turn to be a captain (no danger of being picked last!). “Buster,” Burnt Chimney’s answer to Wilt Chamberlain, was my first-round draft pick. I was short, but I wasn’t stupid.

I also picked “Mickey,” the funny-talking Polish kid from Chicago who had just moved there, because he still didn’t have many friends and I was interested in becoming one. “Kit,” a tender soul who could usually be found hanging out with the girls (Spike and Chester called him a “sissy”), completed my Dream Team.

Our strategy was simple–I played point and passed the ball to Buster as often as possible while Mickey and Kit shuffled their feet, waved their arms wildly and tried to create a diversion. When Buster was triple-teamed, as he often was, he would kick it back out to me and I would can one of my patented, “Hondo” Havlicek fade-away jumpers. Occasionally, Mickey and Kit would chime in with a bucket or two, and between the four of us, we tore through the 5th grade intramural league, including Spike and Chester’s team.

For our efforts, each of us received a dime, enough for an afternoon “Nutty Buddy” or ice cream sandwich. As for Spike and Chester, I never heard another word out of them.

I would go on to high school, become an honor student, earn one of the red wool letterman jackets with the white, leatherette sleeves, and receive academic scholarships offers from Duke, Wake Forest and Harding. Spike wore a blue and gold, corduroy Future Farmers of America jacket until he dropped out of school in 10th grade.  By the time I had graduated from college, he already had several run-ins with the law and was making license plates and eating three squares a day at the state pen.

Fortunately for Spike, he got out of the slammer eventually and started to turn his life around. My mother saw him a few years ago behind the meat counter at a supermarket in Roanoke. He was holding down a steady job as a butcher.

He recognized her, and after introducing himself and inquiring into how many pounds of ground beef she wanted, he asked how I was doing.

She told him that I had become an eye doctor, married a beautiful woman and sired three fine sons, all of whom were smart, handsome and athletic. For good measure, she threw in that I’d just run a marathon. It’s possible she might have gone just a little overboard.

He avoided eye contact as he listened to my updated resume and prepared her order. But then he looked up, handed her the carefully-wrapped package, and smiled. “Tell him I said hello,” he croaked, barely-audible, more whisper than roar after all those years.

She told me she got the impression he really meant it.