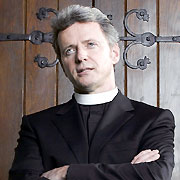 The fallout over The Book of Daniel continues over at NBC. After a week of tepid reviews and further protests, the show appears destined for that place where bad TV shows go to die–the trashbin. As I pointed out last week, I can handle a little “edge” if it’s for a good cause. But in my opinion (and that of some secular critics as well), the show is a flop both artistically and morally and I felt that even without the firestorm of protest ignited by the American Family Association that it would probably die on the vine anyway.

Despite the fact even more affiliates are choosing not to air the controversial show, NBC recently issued the following statement:

“The Book of Daniel is a quality fictional drama about an Episcopalian priest’s family and the contemporary issues with which they must grapple. We’re confident that our viewers can appreciate this creative depiction of one American family and will understand it to be an entertaining work of fiction.”

Yes, and that buck-naked emperor over there has some mighty fine new threads too. It would appear that NBC may have overestimated the American appetite for “entertaining” portrayals of “contemporary issues.”

Additionally, the New York Times has an interesting piece on the behind-the-scenes maneuvers of the show’s advertisors and sponsors, and there is this thought-provoking op-ed by James L. Evans, pastor of the First Baptist Church in Auburn, Alabama.

Pastor Evans has some good points. The diminishment of a robust faith perspective in today’s media doesn’t pose the kind of threats to life and limb that real persecutions in Sudan and China do. Christians shouldn’t necessarily expect a sympathetic reception from Hollywood or network television. However, I would also point out to the good reverend that conservative Christians have just as much right to “preen” and “whine” (his words) in front of a camera as do homosexual rights and pro-choice advocates. No one has a corner on free speech.

My larger concern is that Christians be known for something besides loudly protesting every cultural monstrosity which comes down the pike. Everyone knows what we are against, but does anyone know what we are for? It’s not enough to constantly critique the culture around us–we must seek instead to engage it and add our own contributions. Where are our best creative minds? Why aren’t there more poets, novelists, playwrights, screenwriters, sculptors and artists who work and create from a Christian world view? Why aren’t Christians making more impact in the arts?

Unfortunately, American envangelicals have spent so much time emphasizing “propositional truth” they have effectively discouraged youngs minds from careers in such “right-brain” creative pursuits–better to be a lawyer, doctor or accountant and hunker down while we wait for the “by and by.” In contrast, Christians from liturgical traditions such as the Episcopal, Roman Catholic and Orthodox communions are far more represented in the arts. If evangelicals desire a credible voice in the “culture wars,” they must learn to think beyond the “bunker mentality” and seek ways to use contemporary arts and media to cast the truths of God in positive and culturally relevant ways.

The world is in desperate need for “salt and light” and a viable alternative to the moral morass of today’s postmodern primetime lineup. “Desperate” priests and housewives are not the answer–neither is a reputation for constantly crying foul without anteing up and contributing to the pot.