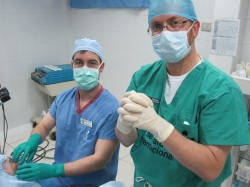 It was another morning at Clinica Ezell in Montellano, Guatemala, and another case of mistaken identity.

There had been a lot of that going around that week. Since I was doing all the preoperative exams, I had spent the most time with the patients. Many of them thought I was the Big Tamale, the Chief Gringo–The Top Gun. Once they were sedated and lying under the operating microscope waiting for their cataracts to be removed, Dr. C was merely the Upside-Down Man behind the mask.

In reality I was Goose to Dr. C’s Maverick, monitoring a million different things and make sure young Mav was constantly exposed to a “target-rich environment.” But with the members of our team dressed nearly the same and wearing masks, everything and everyone blended into one. By the morning after their surgeries, as I removed their patches and examined them postoperatively, most patients were convinced I had done all the work.

It was hardly fair to Dr. C, whose skills as a “jungle ophthalmologist-extraordinaire” were the real reason they were seeing well again. But I will admit to occasionally taking a bit of perverse pleasure at the thought of me, an optometrist, being mistaken for an ophthalmologist. We optometrists had been working hard toward professional parity for years, and it looked like that moment had finally arrived.

Now I was sitting beside another beautiful señora who was awaiting her own miracle on the morning after. She reminded me of my mother; tiny, ebony hair, skin brown and wrinkled from years of tending God’s good earth beneath his big, bright sun. Dress my Mom up in one of those rainbow skirts-of-many-colors and she could have easily passed for a Mayan.

She would have loved it there. She cherished flowers and beautiful foliage. She was a seamstress herself and would have admired the natives’ hand-crafted clothes and accessories (or “do-dads” as she would have called them). She would have enjoyed sitting in one of their circles of women, browsing through their wares, nodding and listening to their stories and laughing at their jokes–even though she never understood a word of Spanish. She never had the chance, though, so now I did it for her, in her memory and honor.

But first, the patch. The one that was conscientiously placed on her eye after surgery by an earnest, well-intended, but greenhorn college student. The one with enough tape to wrap King Tut and his entire family and entourage for eternal preservation in The Great Beyond.

The beautiful señora had fragile, sensitive skin like Mom too, and when I started to remove the tape and peel back her eyepatch, she winced in pain. A small group was gathered round, and I asked them a theoretical question: If one of you, young grasshoppers, were in her hospital gown, would you choose to have your patch removed slowly, prolonging the pain, or all at once, greatly sharpening it? Their answers varied widely.

The tape was intermingled with her long, dark hair, so I tried to gently pull the clumping strands loose from the clingy strips. Still, I inadvertently epilated bits and pieces, causing her to grimace, the furrows on her forehead deepening like rows of freshly-plowed earth. It occurred to me that, ironically, this final step was many times more painful than the cataract surgery itself.

Suddenly, she raised her hand, swatting at my own until she finally grabbed it, her small, sinewy fingers transformed into a sure-gripped vise. “Jesús! Jesús! Es que a Jesús?” she shouted.

I thought I recognized one of the words, but I wasn’t sure. A staff nurse was standing nearby. She smiled, and in perfect, deadpan Spanish replied, “Eso no es Jesús! Eso es sólo el médico!”

The entire ward erupted in laughter, first the women’s side, and shortly thereafter, the men bellowing in return. Even the beautiful señora stopped her wincing and cackled in glee. I knew that I, the ever-bumbling gringo, had once again become the butt of the joke. I was used to this role, and I really didn’t mind. Laughter is good medicine, maybe even the best kind.

Number One Son was Johnny-on-the-spot as usual, at my side in an instant to explain to me what fish-out-of-water social faux paus I had committed this time. “Dad, she said ‘That’s not Jesus! That’s just the doctor!'”

I laughed too, and the beautiful señora kept smiling as I removed the rest of her patch, the soothing anesthesia of our group’s shared levity taking firm hold. She counted fingers and then some, and her laughter quickly turned to tears of joy and praise to God.

I thought about this incident, this case of mistaken identity, and it occurred to me that all of us, when you dress us up in the same scrubs and hide our faces behind identical, diaphanous masks, must look a little bit like Jesus to those desperate and faithful people.

One thing’s for sure, though: My mother would have never mistaken me for Jesus. She knew me way better than that.