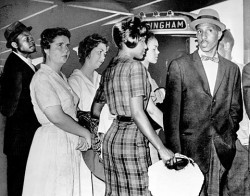 I was an immaculately-groomed half-pint in September 1968 as I stood by the road in front of our brick rural rancher waiting for Bus #18 to usher me into the next 12 years of mandatory public school education. A book bag in one hand, a G.I. Joe lunchbox in the other, I was escorted by my older sister, a worldly-wise 5th grader who was under orders to watch my back.

I heard the bus before I could see it. It had another stop about a quarter mile down the road, at the foot of a low-grade hill. I listened as its diesel engine geared down, brakes squealing, and then there was a pause that seemed to last forever as my neighbors boarded. Soon the engine roared to life again, and the great yellow beast appeared over the rise. I watched, transfixed, as the dual caution lights took up their metronomic beat. It lumbered toward me and finally stopped. Opening its mouth, which was oddly situated near the front of its body on the right side, it stood stark-still, waiting to swallow me whole. My mother watched from the front door, choking back tears.

Mr. Neathawk, the grandfather of some good friends down the road a piece, peered down at me from the driver’s seat, smiling, his hand still on the knob which controlled the long, silver pole which operated the doors. Another long stick with a knob extended up from the floor like an appendage. I stood there at the threshold, transfixed by the beast’s innards. I had watched with rapt fascination as those doors would fling open and then fold shut again as my sister had stepped aboard in years past. Now the man behind the curtain and his various knobs, wheels and gauges had been revealed. I spent the next 12 years trying to figure out how it all worked.

“Come ahhhn!” my sister commanded, prodding me. She was no doubt irritated to be forced to serve as nursemaid to such a grade school greenhorn. She bounded ahead of me, but I crawled up the steps on all fours, using my book bag and lunch box to supplement my legs which were a little too short to negotiate the steps. Mr. Neathawk said, “Hi Mike!” and I just stared at him, my mouth agape and my dilated pupils struggling to take in all the fresh images which came at me like a fast-forwarding action movie. The doors were still open, and the warning lights tapped out their steady beat.

“Go sit with your sister,” Mr. Neathawk said, pulling on the knob which was attached to the silver pole which opened and closed the beast’s mouth. He glanced up, watching me in his long, oval mirror as walked the gauntlet of older kids, who were no doubt thinking Dang, they keep getting shorter every year.

I found my sister about halfway back.  Naturally, she had already taken the window seat. As a rookie, I had to serve my time on the aisle, my stubby legs barely dangling over the edge of the brown, leatherette seat. When I was situated, Mr. Neathawk let off the clutch and gave her some gas. The great yellow beast roared and jerked. Fortunately, I had placed my book bag and lunch box in the space between my sister and me–I needed both hands to grab the seat directly in front. I nearly fell out into the aisle.

I had no idea at the time that I was taking part in history. The fall of 1968 was the first year of full-scale school desegregation in Franklin County, Virginia. It had begun in 1965 with the junior high in Rocky Mount. The county’s residents, mostly white, working class descendants of laconic, hardscrabble Scots-Irish who had settled the hills and mountains of the county generations before, had accepted it with barely a whimper of protest, unlike the full-scale “Massive Resistance” of our Southside Virgina neighbors to the east of us.

Many of them, descendants of slave-owning planters who had seeded the rich soil near the North Carolina state line with tobacco since the earliest days of the country, had shut down their school systems and started their own private academies rather than submit to the U. S. Supreme Court’s 1954 ruling in Brown v. Board of Education of Topeka. But in Franklin County, blacks and whites had lived as close neighbors and worked together for many years, creating an air of mutual respect if not outright fellowship. I suspect both sides had reservations about what was coming, but most of all they just wanted their kids to get along and get a good education.

But this would be a severe test of those hopes and good intentions, and after the assassinations of Martin Luther King, Jr. and Bobby Kennedy a few months before, both blacks and whites were worried that there might be trouble. I suspect my parents were too, although they never talked about it in front of me. But I could feel the tension. I had watched the unrest and riots in Memphis, Chicago and other distant places on our little black and white television.

Soon the bus began to make other stops, including the houses of black children who had previously attended the all-black Booker T. Washington Elementary School on the grounds of the national monument just a few miles from my house. I remember watching some of them get on board the bus with white children for the very first time. They were a little slack-jawed and wide-eyed, just like me. I don’t recall where they sat. I can only hope it was wherever they wanted.

When we arrived at Burnt Chimney Elementary School, we were met by smiling, young teachers’ aides with big, beehive hair. They scanned all of us newbies and our name tags and quickly ushered us to the proper classrooms. There, my class was met by out teacher, Mrs. Witcher. Contrary to her scary-sounding name, she was very nice and not a hag. She welcomed us all, including Douglas, Bud, Mundy and Gayle, the four black children in our class.

I remember staring in wonder at the deep ebony of their skin; it was probably the closest I had ever been to a black child my age. They probably stared right back, wondering how in the world God could have messed up and forgot to add the color, leaving a poor child like me so lily white.

There were no riots that day, unless you count the mass confusion that broke out the first time we all tried to unfold our blue and red mats for “rest period.” But we managed to work it out, blacks and whites lying down side-by-side for a bit of quiet and contemplation, closing our eyes together and wondering what adventures the next 12 years would bring.

For the most part, they brought the normal joys and sorrows of human beings growing up, working and playing together, just trying to survive. We may not have become the best of friends, but we were friends enough. We studied, laughed, cried, played ball and grew older, salt and pepper mingled together. Our parents looked on, greatly relieved.

I was born in 1961, the Year of The Freedom Riders. By the time I boarded Bus #18 seven years later, the cruel taunts and physical blows that those brave children endured had, in good season, borne delicious fruit. They had made a mockery of their foes and critics who had, over the decades, drummed out their metronomic warning beat.

The Freedom Riders got the last word. Contrary to the prophecies of the doomsdayers and the naysayers, the world did not come to an end.