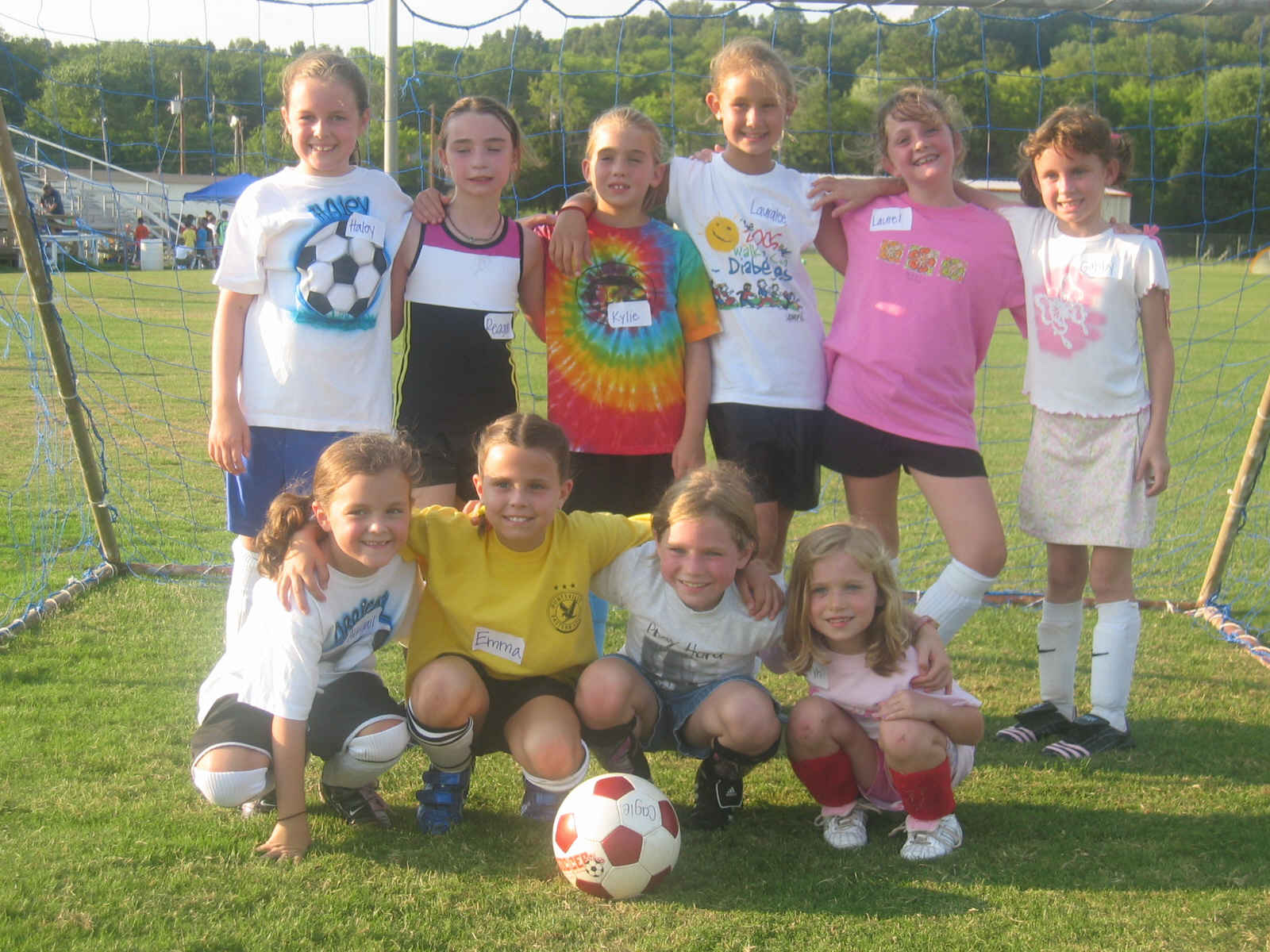 July means church soccer camp and that in turn means that our children’s minister will be calling me again to see if I would be willing to coach. I tell him what I tell him every year, that I really am retired this time, and I go into medical textbook detail about the scar tissue around my L5-S1 vertebrae and how I can run in a straight line reasonably well, but add the constant start and stop plus the twisting, lateral movements of your typical children’s soccer camp and it’s Sciatica City for me. On and on it goes, year in and year out.

But please, he always says, we need you. Yeah, me and the 15 years worth of balls, cones and scrimmage jerseys that I carry around in my large, black, slightly moldy Adidas ball bag. You know, the one with the torn shoulder strap and the bottom that’s starting to fall out.

Eyegal watches all this with a certain cynical bemusement. Each year she rolls her eyes so far back into her head that only the whites show and checks the ibuprofen dish that sits on the coffee table in our family room to make sure that it’s well-stocked.

“You know you’re going to go, and that you’re going to love it, so stop the drama and give me all those practice jerseys so I can wash them. I bet they still smell from last year,” she always says.

And of course, I always do go and did go again this year, out to the expansive and well-groomed pitch at Virgil I. Grissom High School to teach a little touch, technique and, on a good day, even a few tactics. The elementary age children who sign up always arrive clad in their multicolored kits and neon boots, generally eager and willing to play “The Beautiful Game.” As long as they get a water break every 5 minutes or so, that is.

I generally prefer to divide children into practice groups by age and ability rather than by sex, but we had a new camp director this year and he thought it would be a good idea in the early part of the camp to divide into boys and girls groups instead. Through an amazing and deft sleight of hand on his part, I ended up with all girls.

Hello? Anything wrong with this picture? I’ve been drowning in a river of testosterone for the last 18 years and all of a sudden I’m supposed to manage an entire squad of “sugar and spice and everything nice?” I’ve always coached “lads,” not “lasses!”

I stared warily at my gang of pig and pony-tailed females, and they stared right back. One of them was an uber cute 6-year-old urchin named Carolyn, a dead ringer for Mary-Kate or Ashley Olsen from their Full House days. She was wearing some kind of headband thingy that looked conspicuously like antennae. How fitting, I thought, seeing as how I’m standing here in the midst of aliens.

Despite the classic fish-out-of-water scenario, the first session was going reasonably well. We played a game called “World Cup” in which the girls were supposed to pick a country and shout its name before they took a shot. The girls seemed to enjoy it, but I learned quickly that geography is apparently not part of the curriculum in the early elementary grades. Some of my 6 and 7-year-olds had trouble coming up with nations to represent, so my two high school aged assistants would whisper a name in their ears as they prepared to take the pitch. Even some of the older girls had trouble. For instance, the one that kept shouting “California!”

I was crestfallen. I’m proud of my W-L record over the years, but what I’m really proud of is all the players (most of them now driving, some in college) who see me at the local Target from time-to-time, call out “Hi Coach!” and shake my hand and tell me what good memories they had playing for me.

That’s what makes it worthwhile. But now this. I was obviously losing my touch. Or maybe when it comes to girls, I never had it in the first place.

I spent the evening and the better part of the next day between patients planning my next session, racking my brain to come up with some activities that would be more girl-appropriate. Let’s see, what do girls like to do? Well, I hear tell that they like to “emotionally bond,” hold hands and squeal a lot. So I searched through my coaching manuals and came up with some games and exercises which involved a great deal of hugging, touching, group affirmation and where everyone gets a chance to be a winner every now and then so nobody’s feeling get too hurt. Or so I thought.

The next day I asked the girls how many were taking dancing lessons (nearly everyone) and then proceeded to demonstrate some ball skills and asked them to copy them. And did they ever! I told them that they were much more coordinated and rhythmic than boys their age. They were very pleased. Even the one who had sneered at me the day before.

Next up–“The Blob.” A huge hit! “The Blob” starts out as three players holding hands (a key component) who must work together as a team and run about the grid trying to kick away the ball being dribbled by one of the other girls. If you have your ball kicked away there is that momentary sense of loss, but it’s quickly overcome by the fact that now you get to become one with “The Blob” and run about squealing and laughing and chasing. This goes on until there’s only one girl left by which time “The Blob” is starting to break apart into several smaller pieces of protoplasm and our sole survivor has absolutely no chance if she follows the rules and stays in the grid, which of course, she doesn’t.

After a quick water break, we reassembled for the next activity. Unfortunately, this is where I lapsed back into my old ways.

“Listen up, ladies!” (I always wanted to say that). “Now we’re going to play a little game called ‘War!'”

There was dead silence, a few disapproving looks and one very loud “Yuck!”

I explained to them that “War” really wasn’t as bad as it sounded, that it involved one team trying to dribble through the other team who were standing in zones, first 3 defenders, then 2 and finally one last man, uh, I mean woman. If a player managed to dribble through the gauntlet and past all 3 zones of defenders, then her team received a point.

We tried it out and it worked pretty well. If fact, things were going just swimmingly until one of my assistants tapped me on the shoulder and pointed out a small pink clump lying to the side of the grid. It was the smallest camper Carolyn. Her eyes were brimming over with tears. Even her antennae were drooping. No, it apparently wasn’t a physical injury, but something much worse–a major emotional meltdown.

I approached her cautiously and knelt over her checking for welts or bruises. Seeing none, I knew my worst fears were confirmed.

“What’s wrong, Carolyn, are you hurt?”

“Then why are you unhappy?”

“Carolyn, the only thing that matters is that you try your best and learn, it’s not about winning and losing.”

Uh oh, I thought, now we get to the root of the problem.

In what can only be described as a moment of divine inspiration, I came up with a winner: “Well, we don’t have to call it ‘War.” We could call it ‘Hannah Montana Skips Through the Forest.'”

Reaching down to tie the laces on her stunning pink Adidas boots, I continued, “And Hannah, I think you’re a very good soccer player.”

I also noticed another difference between girls and boys. When a boy goes down, often play goes on. When a girl goes down, play comes to a screeching halt. Just like their mothers, my all-female crew circled the wagons and gathered ’round to provide encouragement and apply some emotional salve. I call it “The Oprah Huddle.”

After a few minutes of recovery, Carolyn was back playing “War” (or whatever one wishes to call it) and even managed to elude the first three defenders and make it into the second zone before losing her ball.

“Great job, Carolyn!” I called out. She looked up at me, the tears only a distant memory now, and fairly beamed.

Last night we finished things off with a coach v. camper scrimmage (sorry campers, I really didn’t mean for that ball to go in for the winning goal. It deflected off one of your defenders for an “own goal”) and a team picture. As I gathered “the lasses” for one final shot, Lauralee complained, “A picture? Why, I look awful! I’m sweating like a boy!”

Correction, Lauralee. You look great, and you’re sweating like a girl.

So to my crew: Emma, Laurel, Carolyn, Melanie, Kylie, Lauralee, Regan, Gabby (appropriately named), Haley and Abigail, I hope you all had fun and learned a lot. And thanks for teaching this knuckle-dragging Neanderthal a few lessons along the way.