Sometimes we Church of Christ folks, bless our hearts, can be more boring than a piece of dry toast. Now for those of you who aren’t from these parts, in the South we routinely use the phrase “Bless his/her/their heart” immediately prior to a critical comment in order to cushion the blow and make it more respectable. Around here forthrightness is considered to be, at worst, the 8th Deadly Sin, and at best, rude. Even my wife, a no-nonsense “Show Me” from Missouri, is now peppering her conversations with the magic words. But I digress.

Despite our penchant for plainness, one look around the news does turn up a couple of Restorationists who are making names for themselves. 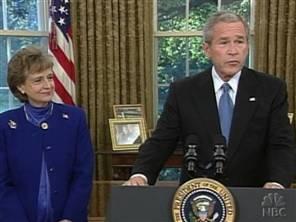 Most of you are aware by now of President Bush’s new nominee for Supreme Court Justice, Harriet Miers. What you many not know is that she is a Christian who was baptized as an adult (full immersion, no doubt) and for many years attended Valley View Christian Church near Dallas.

Now, I know what some of you more hard-core Church of Christ folks are thinking–an independent Christian church “doesn’t count” since they have an organ and all. But just think of the situation like it was your Uncle Billy Bob the chicken thief, the scoundrel who invariably shows up in every family tree. You can ignore Uncle Billy Bob all you want, but at the end of the day, you still have to admit that you’re related to him.

But trying to classify Ms. Miers as a Dobson-esque evangelical is not so easy. During her time in DC, she apparently has frequented several Episcopal churches including The Falls Church, a more evangelical parish which remains in communion with the Episcopal Church USA, openly gay bishops notwithstanding. Ms. Miers was born Catholic, so an evangelical Episcopal parish may be the perfect via media for her. Maybe she just needs a little liturgy fix now and then (I can relate).

So, what’s all that got to do with her qualifications to be the next Supreme Court justice? Well, time will tell, but I’m hoping that the powers that be will scrutinize her record as a private practice lawyer, her experience (or lack thereof) in jurisprudence and her relationship with President Bush (whom she has described as the “most brilliant man” she has ever met) at least as much as her Christian beliefs–or at least they should.

days is Los Angeles Angels pitching ace John Lackey who is scheduled to start in tonight’s 3rd game of the ALCS. His Church of Christ roots apparently run back a few generations and he is a former member at the Highland Church of Christ in Abilene, Texas.

Frankly, this makes me more nervous than the Harriet Miers brouhaha. As a Cardinals fan (I married into that–as a boy I pulled for Johnny Bench and the Big Red Machine), I’m sweating bullets over a potential Halos-Redbirds World Series match up. If God is a baseball fan (and I presume he is) and the starting pitcher for a team called the Angels is a Christian no less, who do you think is going to win? I mean, didn’t you see the movie?