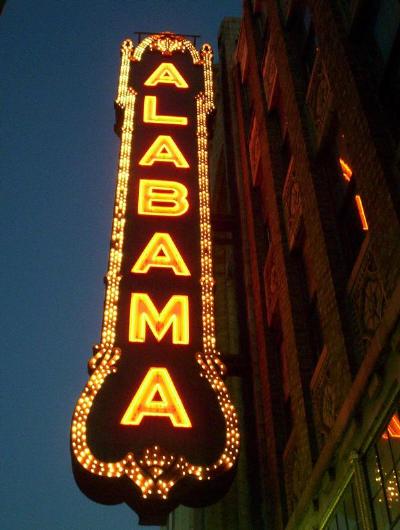 Have you ever seen the same thing a million times, but in a moment of great clarity, suddenly seen it in an entirely different way? If so, then you know how I felt last night as I road-tripped with Eyegal and some good friends to the beautifully restored Alabama Theatre in downtown Birmingham for a showing of the classic Christmas feel-good film, It’s a Wonderful Life.

A television rerun or a DVD don’t do the deed like the flashing neon sign, the gleaming, waxed floors and the gilded, cathedral-like trimmings of The Alabama. Throw in a Wurlitzer that rises like a wailing phantom from beneath the stage floor, audience sing-a-longs of “Oh Come All Ye Faithful” and “Buffalo Gals” and a retro Disney cartoon for an appetizer, and you suddenly find yourself drifting back to the 1940s, a time when real gentlemen wore woolly, tweed suits and flashy fedoras down to the corner market, and ladies, in their form-flattering skirts and soft, feminine blouses, charmed passersby and flaunted their sizzling sexuality without shedding a single stitch of clothing.

Frankly, I needed a booster shot of Christmas cheer. In recent days, I had found myself limping toward Christmas, burdened with a sackful of broken bits and pieces of my life–none of them major or catastrophic–but numerous enough that I could feel their cumulative weight with each step I took. If anything would salve my soul and ease my burden, I thought, it would be a night out on the town with my wife and some good friends and watching a vintage movie in a bejeweled, fairy tale setting.

But as I looked on with guardian angel Clarence and followed the turbulent flow of George Bailey’s often topsy-turvy life, I began to fidget and squirm. My mind returned to my sackful of problems and, more acutely, to the pain that was now radiating down my left leg, a friendly reminder from my frequent companion, Sister Sciatica, that, yes Virginia, there is such a thing as mortality. That I was supposed to be laughing and having a good time, and yet wasn’t, just made me all the more anxious and disappointed.

But as the movie reached its climatic final scene, the “powers and principalities” which threatened to swallow poor George were themselves consumed by the love and generosity of his family and friends. And I saw something that I had probably seen a million times before, but now, in an entirely different way.

As George runs up the staircase of his “drafty old barn of a house,” he grabs the broken banister knob, the one that has gone unfixed and been coming loose for years. At times he’s laughed at it, at other times he’s cursed it, but this time, he reaches down and kisses it. In doing so, he makes his peace with all the imperfect parts of his life, the ones that together, create the perfect whole.

As the credits began to roll and the Wurlitzer began to wail once more, the audience, awash with tears, applauded and cheered. I stood and stretched, and as the pressure on my lower spine was relieved, the pain in my left leg began to ease a bit, and I started to think more clearly. I picked up my jacket from the adjacent seat and looked down to make sure that I had left nothing behind.

That sack, filled with all the banes, blessings and broken banister knobs of my “drafty old barn of a life,” still lay at my feet. But this time, in a moment of great clarity, I saw it differently, and I did something that I had not thought to do before. I picked it up and kissed it, and in doing so, made my peace with all the imperfect parts of my life, the ones that together, create the perfect whole.