“They said we were going to play in our geographical area. I guess they meant the United States.”–Lipscomb University basketball coach Scott Sanderson

Heh, that’s pretty funny, just the kind of quippy soundbite you might expect from the son of colorful former Crimson Tide basketball coach “Wimp” Sanderson. Don’t be fooled, though. Although there won’t be much purple and gold in the crowd, Coach Sanderson is still happy to be taking his Bisons to their first post-season appearance as a Division I team--even if it does mean traveling over 1300 miles from Nashville to El Paso, Texas to take on the UTEP Miners tonight in the first round of the National Invitational Tournament (NIT).

Had it not been for a heartbreaking 74-69 overtime loss to the cross-town rival Belmont Bruins in the Atlantic Sun Conference Tournament Final, the Bisons might be headed to “The Dance” to face an early demise at the hands of either U.C.L.A. or Duke (a story, I’m sure, that they would have enjoyed telling their grandchildren). Instead, they are off to the scenic, West Texas desert to face UTEP (of “Glory Road” fame) in the house that Don Haskins built.

If they do manage to get by the Miners, the cross country road trip would then boomerang back to Ann Arbor where the Bisons would face the Michigan Wolverines on Friday. Talk about serving as cannon fodder! Oh well, it still beats sitting at home watching all the action, and Sanderson and the Lipscomb crew deserve a hearty congratulations for earning their first D-I post-season birth. Crawl, walk, run, right?

My younger sister is a 1993 Lipscomb grad, and one year for Christmas she gave me a button-up Lipscomb baseball shirt. Because of the buttons running through the middle of the shirt, the “Lips” was on one side with a small separation from the “comb” on the other. I was wearing the shirt one day when I noticed a friend of mine staring at the shirt with a perplexed look on her face.

Mouthing the words slowly, she replied, “Lips….comb. Lips…comb. I don’t get it!”

Hopefully after tonight’s game, the Miners will remember that Lipscomb is one word and won’t forget a surly bunch of Bisons who were forced to trek across the country on two day’s notice to play an opening round game in their “geographical area.”

Oh, by the way, if you’re planning to watch the game on EPSN in the Huntsville area, think again. It looks like they’ll be broadcasting Virginia vs. Stanford instead. Nothing against the Cavs and the Cardinal, but really, how many grads do they have in this area? On the other hand, how many Lipscomb grads live in North Alabama and Central Tennessee? I rest my case.
———————————————————————————- 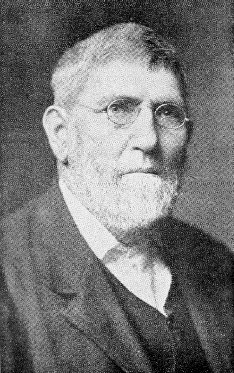 Which brings me to my final point (such as it is). This whole Lipscomb post-season thing has me thinking: What would the “old man” say about all this?

Neither David Lipscomb, nor James Harding for that matter, strike me as guys who would have been very pleased with all the attention given to sports these days. I remember studying in the library at Harding and staring up at the portraits of these two founding fathers (especially Harding, with his ZZ Top-style beard hanging down to his belly button–doesn’t he realize that would get him kicked out of school?) and thinking: these guys seem pretty serious. Neither, to me, appear to be the type who would have approved of “amusements” in general, or sports in particular–especially at the institutions which they founded.

Anyone out there who is familar with Restorationist history have any Lipscomb anecdotes or quotes that might shed any light on my musings? When you get right down to it, does what Lipscomb would think even matter anymore?
———————————————————————————-
Update 10:25PM

Lipscomb Wins Second Half of Game Against UTEP 43-41

Unfortunately, UTEP won the first half 44-23 for a final score of 85-66. Hey, at least the Bisons stepped it up a bit after halftime! Here’s hoping they got a nice goody bag and a t-shirt for their trouble.