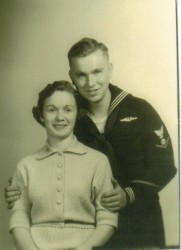 This past Wednesday wasn’t the first time I’ve written Christine Brown’s eulogy in my head while rushing home to say goodbye. In 1999, my family and I drove all night from Huntsville to Roanoke, and I had everything all worked out in my mind by the time I pulled into the hospital parking garage. I even had the perfect quote from a man named G.K. Chesterton:

“The most extraordinary thing in the world is an ordinary man and an ordinary woman and their ordinary children.”

I thought that fit her to a tee.

When I got to her room, I hardly recognized her since her body was so swollen from the infection, but she was awake, the TV blaring. It was the Weather Channel, of course. If there was a tornado anywhere within 50 miles of Huntsville, Alabama, my mother would know about it before I even heard the sirens go off.

I leaned over her bed, looked into her eyes and asked her, “Mom, are you going to fight this?” thinking surely not this time. She looked up at me and nodded, Um hmm. I thought Oh Boy, here we go again.

We all know how that one turned out. She lost her arm to that nasty infection, but not her will to live. With everybody except her family—who knew better—betting against her, my Mom went into a coma and became very still, like a turtle withdrawing into its protective shell, and waited for the threat to pass. Her doctors counted her out—there’s no way she will survive this, they said, and even if she did, her quality of life would be poor. And really, who could blame them? They had science and statistics on their side.

One problem—my mother didn’t believe that any of that fancy stuff applied to her. We tried to explain this to them, how she had survived a brain tumor at age 19, bacterial meningitis in 1984 and ovarian cancer in 1989. They didn’t understand that our mother had cheated death so many times that The Grim Reaper had grown discouraged and was actually considering a career change.

We told her doctors that we really didn’t think she was ready to die. We pushed them to take the extraordinary measures necessary to keep her going and they pushed right back. After six weeks in a coma and no end in sight, her doctors said to us children, “We need to have a meeting and talk this out.”

As we stood at her bedside a few minutes before that conference was set to start, Christine Brown opened her eyes, turned her head toward us and smiled as if to say, “Why all the fuss? I told you I was going to get better.”

Needless to say, it was a very short meeting. Her doctors and the residents and students in attendance that day learned a very important lesson. When it comes to the mystery of our mother, you don’t try to pigeonhole her into some statistical category or cite cases from textbooks. You don’t try to figure her out and you certainly don’t look down your nose at her simple and straightforward Franklin County ways. The only proper response to the mystery of our mother is to bow, take a knee and show some respect.

I recount all of that to let you know this—her life was a gift, and these last ten years, especially, have been icing on the cake, a dollop of whipped cream with a cherry on top.

Virginia Christine McGuire Brown was born on March 17th St. Patrick’s Day, 1933, and if you look around today you’ll spot some grandsons wearing green ties in honor of her Irish roots. The only daughter of Clyde and Elsie, she learned the lessons of life and love on a Depression era farm, an ordinary patch of land with a stunning view of the Blue Ridge mountains which she tended her entire life. There, she made her stand. Like her many vegetables, flowers, trees and shrubs, she bloomed where she was planted.

Our mother was a woman of faith who loved Jesus and for many years taught flannelgraph lessons to young children in Wednesday night Bible classes at the Roanoke Church of Christ. She wasn’t much for words, though,  and if you asked her what Jesus meant to her she might get one of those deer-in-the-headlamps looks and pause and think a bit, but then it would come to her—“He is my everything, he is my all. He is my everything, both great and small” she might say, falling back on the simple words of a children’s song.

But ask her to show you her faith and she would point toward her flowers, her woods, her meadows, “robed in the blooming garb of spring.” To my mother, worship was recognizing the bond between Creator and creation, it was to get down on your knees and touch the earth with your hands, to take the land and honor it with your very best efforts.

To her, faith was making beautiful clothes. She was a seamstress, and when the earth would take its winter’s rest, she would retire to her basement and sew the latest fashions, pants, dresses, and in the 1970s, matching polyester leisure suits for my father and me.

To her, faith was marrying and loving and sharing a life with an ordinary man, even if that life together was not as long as either had envisioned. When Harold Brown, a young sailor on leave, started showing up in the toy department of the downtown Woolworths in the early 1950s and browsing over the Slinkys and Hoola Hoops, everyone in the store knew what he was really after. He chatted up the young sales clerk, and although the lengths to which she went to resist his advances are the stuff of family lore, she eventually crumbled and agreed to a date because my father was nothing if not persistent. Young love is like that—it is a fire that will not be quenched.

To her, faith was having and raising three ordinary children. Now we all now that Christine had her own way of hearing things, and had that not been the case, many of us wouldn’t be here. When her doctors told her at age 19 that she shouldn’t have children, she heard that as couldn’t have children and took it as a challenge. She thought—Oh yeah? Well, we’ll see about that.

First Alisa, then me, and finally in 1971, a little “surprise package” named Melanie that earned my father and mother the award for Couple with the Youngest Child at the Franklin County High School Class of 1951 20th Year reunion. It was an honor which they bore proudly, along with a sack full of lotions, chew toys and cloth diapers.

Those ordinary children grew up and married, and Christine took her two sons-in-law, Wayne and Jason, and she made them my brothers. She took my wife Sandy and made her a sister to Alisa and Melanie. She took these new additions to our family and tutored them in the ways of love, sharing with them her secrets of carrying on through hard times and times of ease. She was the mother of us all, and she took us under her wing and made us one.

Those ordinary children and their spouses started a few fires themselves and Christine became “Meme” to nine, count ‘em nine grandchildren—but you didn’t dare call them ordinary, not to her face anyway. Megan, Andrew, Nathan, David, Daniel, Joshua, Haley, Anna and Ethan, more pieces of the good life grafted on to the garment of love that she stitched together. She even lived long enough to welcome a grandson-in-law—yet another Nathan—into the family. They are all now part of her legacy and have shared her passion for life and beauty.

My mother had many ordinary friends, neighbors and extended family, as I look out this morning, I see an audience full of them. You’re part of her lifelong sewing project too—but you don’t look like a polyester leisure suit. More like a colorful quilt whose warm embrace has enveloped us these last few days. Each of you has your patch of quilt, your own special memories of Christine. You have shared your lives with her, and for that, we thank you.

There is one special friend that deserves special mention this morning. In those dark and difficult days after Dad’s death, Joe and Wilma Cullum reached out to Mom and Melanie and made them a part of their lives. They invited them on their annual trips to Jekyll Island, Georgia and made sure that they didn’t fall through the cracks. When Wilma lost Joe, Mom was there, sitting on the mourner’s bench with her. Wilma was like a sister to Mom, and they shared a very special relationship, one based on good food, dry wit and boutiques. Lots of boutiques.

Picture if you will, their last conversation a couple of weeks ago and one of those split screens like you see on TV or the movies, with Wilma on one side with a phone, Christine on the other, the two of them carrying on a lively and salty dialogue. Wilma asks, “Do you know what’s wrong with the economy, Christine?”

“Well,” Wilma replies, “what’s wrong with the economy is that you and I can’t hit the streets and go shopping anymore.”

Of course, there was always QVC.

In the last years of her life, Christine was blessed to have Wayne and Alisa  helping out and watching over her from on top of the hill along with several special neighbors, and of course her special dog Tramp shadowing her every move. That dog emerged out of nowhere after she got sick in 1999, and I’m convinced that he’s one of the reasons she lived as long as she did. If God’s guardian angels can take any form, I suppose there’s no reason why one couldn’t show up as a chubby, nappy-headed fur-ball with a hankering for ice cream and chicken strips.

My mother lived and loved well. She was the proverbial Timex watch—she took a licking and kept on ticking. She laughed, she cried, she pouted. She took the light that was given her and she made her way through this world as best she could. She was a quiet woman with a sweet spirit—and just enough Scotch-Irish cussedness to spice things up and make it interesting. We didn’t always understand her ways, but we certainly learned to respect them. I mean, who could argue? They worked! Like Frank Sinatra, she did it her way.

Chesterton was right. Virginia Christine McGuire Brown took the ordinary things of this world and weaved together an extraordinary life.

Thanks so much for being with us this morning. You honor Christine and comfort us her family with your presence. Yes, things can get a little dark as we walk through the Valley of the Shadow together today, but be of good cheer, because now we have yet another gentle soul walking just a few steps ahead of us, leading us kindly toward The Light. God bless you all.