Thanks to Scott Freeman, we now have some new information to mull over this morning regarding the Burger King-Antichrist connection.

In the comments section of yesterday’s post, Scott chimed in with this pearl:

“You know the founder of Burger King was COC right?”

“Get out of here! Really? No, I wasn’t aware of this, but that does thicken the plot considerably.

Well, now that you’ve piqued our curiosity, we’re waiting with bated breath to hear more. Do you happen to know if he was premillenial or amillenial?”

Then he shot back:

“I may be wrong. But during my first youth ministry gig I worked with a former missionary to Brazil. He was the one who told me the founder was blood-bought and sanctified and had been a major funder of Lucado during his Brazil missionary days. My pulpit guy and Lucado had worked together. He was typically a pretty credible guy. Can’t prove it though.”

All right, this is interesting. We’ve got some second hand information, but it sounds like it may be reliable, which if it is, then it adds an interesting twist to this whole 6/6/06 thing, even though it’s now 6/7/06.

I did a little sleuthing and I found out that Dave Edgerton and James McLamore co-founded Burger King in 1957. I Googled both their names, along with “Church of Christ” and came up dry, but I did discover that they were residents of Miami, Florida. Max Lucado was the minister at the Central Church in Christ in Miami prior to serving as a missionary in Brazil, and although that’s merely circumstantial evidence, that’s good enough for me (I would have made a terrible defense lawyer, but possibly a good prosecutor).

They sold Burger King to Pillsbury in 1967. That was back in the day when they were still handing out harmless paper crowns and long before kid’s meals came with brazen, Bratz dolls (or as Nancy so eloquently puts it, “Skank-Ho dolls”), and some time before a mascot with a wooden grin and a questionable sexual orientation showed up in our bedrooms, croissant and coffee in hand.

Both appear to have been hardworking businessmen trying to make an honest buck, and one apparently put his french fry money to good use by helping to launch the career of one of the most influential Christian speakers and writers today. In short, neither of them looks much like an antichrist. 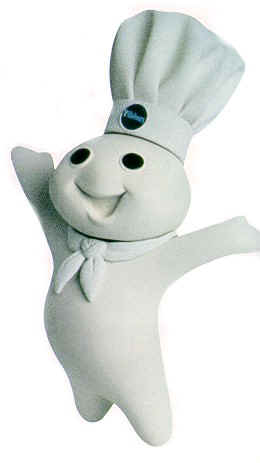 But let’s remember who they sold the company to–Pillsbury! You’re starting to get the picture, aren’t you? As the blockbuster movie Ghostbuster correctly pointed out, evil spirits often taken the form of corporate mascots. In that movie, Gozer the Destructor, an evil Sumerian demi-god, took the form of the Stay-Puft Marshmallow Man after Dr. Ray Stanz (Dan Akyroyd) was unable to clear his mind completely of all images. Of course, we all know that there really isn’t a Stay-Puft Marshmallow Man and that he was actually a parody of none other than the real-life Pillsbury Doughboy!

So you see, the cheesy and creepy Burger King is not the antichrist, but merely a minion. His father in crime is that lovable and innocuous looking, but bad-to-the-bone, overweight, walking and talking lump of dough himself. It’s true that Burger King’s connection with Pillsbury was severed in 2002 when it was purchased by another corporate conglomerate, but by then the damage was done.

So what are we to do with this information? Well, I’m not here to tell you what to do, only to give you the cold, hard facts. An immediate boycott of both Burger King and Pillsbury products is an option, but since those always tend to only increase interest in the targets of the boycott, that would probably be an exercise in futility.

As for me, I plan to vote with my gut and continue to eat at Wendy’s–they now offer side-salads instead of fries for us middle-age guys who fret over our expanding paunches. And last time I checked, I didn’t see any Bratz dolls. As for that other Dave (God rest his soul), I think we always knew where he stood, if you know what I mean.

Oh, and check over your shoulder every now and then for the Doughboy and his son “The King,” who you must remember, is really only a prince. And while you’re at it, keep an eye out for the Michelin Man as well.