In an earlier post, I wrote about how my high school friend Eric Ferguson was using a populist strategy and one of my favorite movies in his effort to defeat incumbent Republican Allen Dudley in the 9th District race for the Virginia House of Delegates. The returns are now in, and despite a hard fought, some would say “muddy,” campaign, Eric came up just short, losing by a mere 1200 votes (53% to 47%). 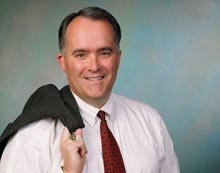 With FDR and “Giv’em Hell” Harry as his patron saints and Dave “Mudcat” Saunders as his campaign strategist, Eric almost pulled it off. He went negative in a nuclear way in the closing weeks, drawing the attention of the Washington Post and predictions of an upset. Perhaps Eric’s most controversial move, no doubt at the direction of “Mudcat,” was to produce a parody website, “The Real Allen Dudley,” which many felt crossed the line when it comes to good taste and fair play.

In the end, perhaps the most difficult folks to fool were the plain-spoken, salt-of-the-earth farmers in Frankin County. When I was growing up, these were the guys who somehow always found time in the midst of slaughtering pigs, raising cattle and harvesting corn to stop by Greer’s Grocery, pop open a Dr. Pepper and a bag of peanuts, and hold forth on the various issues of the day. During a recent debate between Dudley and Ferguson which was broadcast on the local cable channel, one such fellow, my Mom’s neighbor, called in and told both candidates that he thought they were “full of bulls—!” The next morning, this Virginia country farmer proceeded to illustrate his point by filling a wagon full of cow manure and parking it along the road along with a sign reading “Ferguson-Dudley Campaign Headquarters.”

I once asked Eric over lunch several years ago if it would be possible to win an election without “going negative” and launching personal attacks on one’s opponent. His reply: “Absolutely not!” Well, he’s at least true to his words, and perhaps this morning he’s consoling himself with the thought that the race wouldn’t have been as close as it was without all the mud. Still, I can’t help but wonder if it was really worth it.

Despite the loss, Eric has likely positioned himself well for another run come next election. For Dudley’s part, having experienced his closest shave since gaining the office in 1993, perhaps he will receive his wake-up call and get up off his keister and at least try to appear busy working on behalf of his constituents. But Eric, if your eyes should per chance fall on these words, next time around ditch the “Mudcat” and bring out the midget with the broom. Mudcats are disgusting bottom-feeders who are only going to sully your good name. Midgets are cute, and if you pair one up with a broom and bring in the Soggy Bottom Boys, I think next time you just might win.