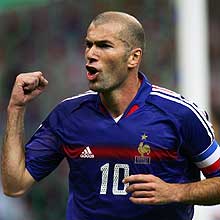 That’s it, I guess I’m switching to Plan Z. After Germany’s shocking 2-0 loss to Italy in overtime yesterday, what other alternative do I have? It’s time to put the past behind me, forgive the snooty little French lady at the ticket booth at the Louvre and place my support behind Zidane, Henry and the rest of Les Bleus. Vive la France? Yeah, whatever.

I was disappointed that Germany didn’t have the legs to finish yesterday, but my hat’s off to the Italians for getting the job done and not letting the match go to PKs which would have only added more fuel to the fires of the mostly American soccer haters out there. The Azzurri outran and outfired Germany in overtime, and Fabio Grosso turned from diver to savior as he struck a beautiful one-touch bender off a splendid service from Andrea Pirlo. Moments later, substitute striker Allesandro Del Piero made a brilliant overlapping run down the left side, gathered in a deceitful reverse pass from Alberto Gilardino who seemed set to shoot himself, and hammered the final nail to the coffin into the right upper ninety.

Two perfectly executed goals in the white-hot moment of truth, brilliant defense (Azzurri still has only the one “own goal” in its debit column), and some gutsy coaching from Marcello Lippi who substituted strikers for midfielders and threw numbers into the Italian attack when most teams would have hunkered down for a shoot out (the result the Germans were probably looking for) were enough to send Italy through.

Although it matters little at this point, there is some consolation for the U.S. in Italy’s drive into the final; that 1-1 tie back in group play is starting to look better and better. It’s not much, but the brave effort against Italy will be something for our National team and its fans to hold on to as they bind their wounds and start to rebuild toward 2010.

If history continues on course, France should advance against Portugal, setting up an Italy v. France final on Sunday. If that happens, I’ll reluctantly pull for France for the sake of The Man, Zinedine Zidane. In my opinion, he’s the centerpiece of the French squad, a veritable artist and maestro on the pitch and one of the finest footballers of his generation. For the sake of good art, I couldn’t root against him, despite the Gallic rooster on his jersey and the snooty Lady of the Louvre.

And if Portugal makes it to the final instead? Right now, I don’t even want to think about that. Desperate times call for mesures desespere. It’s time for Plan Z–Vive la Zidane!

Yeah, and France too.