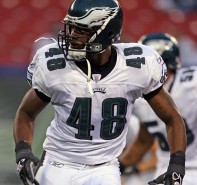 A while back, I posted on Torrance “Tank” Daniels, a Harding University grad who was attempting to make the final roster with the Philadelphia Eagles.

Despite having played well in preseason games and practices, Tank didn’t quite make the final cut, but he was signed to the Eagles practice squad. This means he practices with the team each week and doesn’t dress out for games, but he still retains his free agent status and could be signed by the Eagles or some other team at a later date. He’ll receive a salary of $64,000 per season (pretty decent money for a guy straight out of undergrad), and the miminum NFL rookie salary of $225,000 per season if he’s picked up and signed to a regular roster. In other words, he’s still “in the game” and looking good at this point. 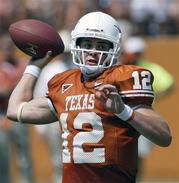 “Tank” is a great name for an NFL linebacker. But what about this guy Colt McCoy, the freshman quarterback of the defending national champion Texas Longhorns? Talk about a gunslinger straight from central casting! Incidently, McCoy is a member of the Church of Christ, and his dad played at Abilene Christian University.

That Church of Christ mafioso thing reaches far and wide. Maybe someday we’ll get our own TV show.