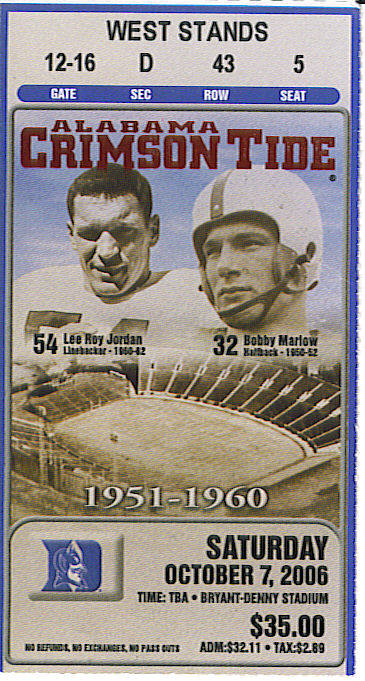 Last Saturday morning, our family awoke at the crack of dawn and headed down to Game Day in T-town. It was only a 2 ½ hour drive from Huntsville to Tuscaloosa, but for all practical purposes it might as well have been 40 years.

I say that because that’s what it felt like–1966. After the obligatory pregame meal at Dreamland BBQ, we arrived on the beautiful, oak-lined, University of Alabama Quad, bordered by Denny Chimes to the south and Gorgas Library to the north. The stereotypical Southern fixation with the past was never more perfectly illustrated than by the Crimson-clad legions bivouacking on the expansive green, reveling in the memories of past teams and glory years gone by.

But these are desperate times for the Crimson Nation. When your arch rival is ranked #2 in the nation and mediocrity is staring you in the face of in the form of a 3-2 team with a 1-2 conference record, conjuring up ghosts from the past may be the only viable option. But throw in a good measure of laughter and fellowship, the sounds and smells of various meats simmering over massive, gas grills and the abundance, yea, the overflowing of various adult beverages, and suddenly the only viable option turns out to be a very pleasant one indeed.

Ah yes, about those ghosts. Spirits–Newsome, Musso, Namath, Jordan and Stabler–flitted freely among the tailgating masses, listening in as grizzled veterans regaled their children and grandchildren with their heroes’ exploits and mighty deeds–season-by-season, game-by-game, down-by-down. A Duke fan, mouth agape, surveyed the scene and used his cell phone to call a friend with this frantic report: “You’re not gonna believe this. These Alabama people are crazy!”

Brother, you don’t know the half of it.

If you’re a citizen of the Crimson Nation, nobody needs to explain to you the significance of the most perfect number–12–nor does anyone have to remind you whose long shadow it is that envelops all this, consuming and dominating the day just as surely as he did when he actually walked the grounds of the Capstone and roamed the sidelines of Bryant-Denny Stadium in those halcyon days of gridiron glory and multiple national championships.

The largest phantom, of course, belongs to legendary Crimson Tide coach Paul “Bear” Bryant. His presence is seen and felt in every corner of the Quad and in the shrine and museum which bears his name located on (where else?) Bryant Drive. Houndstooth hats, SEC and national championship trophies, the rings, and of course, his desk and chair, are on full display, sacramental relics which render the gazing Tide faithful breathless, teary-eyed and all atremble.

His footsteps echo on the path (now called “The Walk of Champions”) leading to the House that Bear Built where, despite firehoses, an obstinate, racist governor blocking the schoolhouse door and the general turmoil that defined the 1960s South, everyone in the nation learned that Alabama was good, even great, at something that mattered.

But legendary figures from the storied Bama past were not the only presence in Tuscaloosa last Saturday. As I purchased my game day program from a vendor at the Paul Bryant Museum, he suddenly looked up and shouted, “Shaun Alexander is in the house! Get your program so Shaun can sign it!”

Alexander, the Tide’s all-time leading rusher and current star running back with the Seattle Seahawks, had the weekend off and was in town for the game. He was apparently touring another part of the museum not open to the public when he and his entourage passed near the main lobby.

There was a rustling and then a murmur from the crowd, and now several were starting to move toward him, searching pockets and purses for a pencil or pen for the one-in-a-million chance at an autograph. Shaun looked startled at first, a little like a deer caught in headlamps, but then he flashed his high-wattage grin, waved to the crowd and trotted off along with his entourage into another part of the museum and away from the gathering mob.

As I left the Temple of All Things Tide, I made my way west down Bryant Drive, past the partying tailgaters and vendors selling their Crimson wares, all of whom were preoccupied at the moment with the closing seconds of the Auburn-Arkansas game. All eyes were glued to their generator-powered TVs, rabbit ears on full alert and portable satellite dishes scanning the southwestern sky for a sign (please, oh God, give us a sign!) of the Tiger’s demise.

As the clock wound down, the schadenfreude was so thick you could cut it with a knife. Cries of “Soooey Pig!” broke out all up and down Bryant Drive as the Hogs finished off the Tigers 27-10, the most stunning upset of the day. It is apparently not enough for the Tide faithful to simply root for their team to win. No, a true believer must also long for and relish any misfortune which might befall “that other school” to the south.

One Alabama student surveyed the scene and was heard to say, “I’m sorry, but that’s just weird.” I happen to agree. And my hesitancy and misgivings over rejoicing in the fall of our archrival is a sure sign that my conversion to the Crimson Way is not yet complete.

As kickoff approached, the Million Dollar Band gathered on the Quad, serenading the crowd with various renditions (brass, drumline and woodwind) of the school fight song, Yea Alabama!  With the masses now whipped into a Crimson frenzy, we made our way through rows of elegant, antebellum-style sorority and fraternity houses, down “The Walk of Champions,” and on to the newly-renovated stadium (seating capacity 92,138) where a delectable feast of Duke Blue Devil awaited. 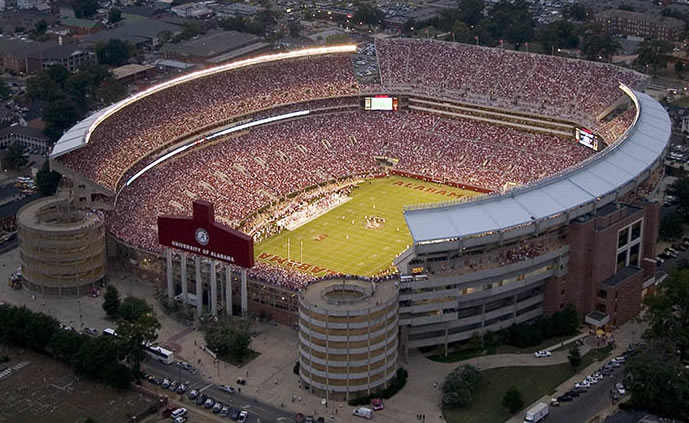 With the congregation now assembled, the service began. First, there was more of the fight song, then The Star Spangled Banner, along with Sweet Home Alabama (the state anthem), followed by video highlights of past championship teams. But there could be no kickoff without first a blessing, an invocation offered up by the recorded, gravely voice of none other than the Bear himself, as he reminded the crowd, coaching staff and players that excellence on the field of play was a time-honored Tide tradition, a high bar that he and his boys had set many years ago that never should be lowered or compromised. The implication was clear: The Bear was watching. And I swear on a stack of game day programs this is true: people around me bowed their heads in reverent silence.

Both teams took the field and then it began. First as a low murmur, then a rising rumble, and as the kicker lined up and began his approach to the ball, it gathered like a cloud of thunder, a towering tsunami, sweeping and consuming everything and everyone in its path, a cresting, Crimson crescendo that still startles even though you know it’s coming: RooooooooooooOOOOOOLLLLLLL TIDE, ROLL!

The only problem with this scenario is that someone forgot to tell the Duke Blue Devils that they were supposed to roll over and die. Despite coming into the game an anemic 0-4 and having lost their homecoming game the previous week to UVa 37-0, Duke brought their A-game to T-town. The sputtering Alabama offense struggled, while the Duke offensive line opened up gaping holes through which their backs rushed for large yardage gains. They also held fast against the Tide passing rush, allowing the fine, Blue Devil quarterback the time and space to find open receivers in the flat.

The score was 14-10 Duke at halftime, and there were murmurs of discontent and even a few scattered “boos” as the Tide retreated from the field. I reached down and checked the battery on my digital camera, thinking that I might need to preserve enough juice to take a picture of the scoreboard at the end, thereby capturing for posterity one of the greatest upsets in college football history. The thought also occurred to me that the glee over Auburn’s defeat earlier in the day had stirred up some seriously bad karma, and that payback would be exacted at an incredible toll.

But after Head Coach Mike Shula delivered a paint-peeling halftime talk, the Tide turned in the second half. Still, it was only 16-14 Alabama with 5 minutes remaining in the game. But our boys broke it open a little with two late 4th quarter touchdowns, an ending eerily reminiscent of the Tide’s loss to Florida one week prior. But the lesson was writ large across the elephantine, concrete bowl as the Tide faithful dismissed: Even 0-4 teams have good, Division I athletes, decent coaching and good game plans. On any given day, anything can happen. And it almost did.

After the game, we crept through the post-game traffic jam and finally made it on to I-59/20 and turned toward home. We had traveled about 10 miles when northbound traffic suddenly slammed to a stop. Obviously, there had been an accident, and a few minutes later, several emergency vehicles, their sirens blaring and lights flashing, made their way down the emergency lanes toward the scene.

It took almost an hour to travel less than 5 miles. I looked and listened for the ambulances to return southbound, bearing the wounded, but I never saw or heard them. The boys were growing restless, and I was growing more sleepy by the moment. I feared that I would have to find a place to pull over and nap if we weren’t able to break free soon.

Then we came upon the scene. Despite all the celebration and joy of game day, for some it had ended in tragedy and death. A body, covered with a sheet, lay in the middle of the road, accompanied by a couple of state troopers and a group of onlookers, apparently uninjured, who appeared to be too shocked to even begin to grieve.

The boys were silent. They were either asleep, or else, taking it all in without a word (it was the latter). We were back up to 70 mph within seconds of passing the grisly scene. I looked back in the rearview mirror and suddenly it was 1996 again. There were no cute preschoolers or car seats this time; only tired teenagers, but still precious cargo, a little more bone-weary now as they contemplated the ethereal vapor of life, the curious and compelling mystery, the jarring juxtaposition of so much life alongside so much death.

The role of protector and the weight of my responsibilities was like a much-needed slap in the face, and I took in a lungful of my second wind. We made good time the rest of the way, and as I drove north, eyes carefully peeled for any sign of danger, I reviewed the lessons of the day: 1. Respect tradition and those on whose shoulders you stand; 2. Seize the day and enjoy your moment in the sun; 3. Celebrate with good food, drink, and song; 4. Practice excellence in all things at all times; 5. Remember, above all, that on any given day, anything can happen.