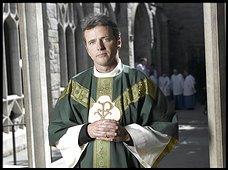 What do you get when you cross a decent TV show like Joan of Arcadia with Desperate Housewives? Well, you get a train wreck of a show called The Book of Daniel featuring a desperate, mealy-mouthed, pill-popping Episcopal priest named Daniel Webster and a cast of characters who are no doubt one of the most despicable assemblages of sad sacks to ever disgrace the airwaves. I know that life is hard, that Christians are far from perfect and I like a little “edge” as much as the next guy, but this one went tumbling over the cliff like a pack of demon-possessed swine.

Note to all: I watched the show. That is my policy prior to commenting on a controversial show, movie or book. I’ve learned the hard way that if you fire off a barrage of criticism based on other’s opinions and prior to reading or viewing a work in question, you can get burned. I knew going into Friday night that the American Family Association (AFA) had already condemned the show (I got all the email forwards everbody!) and had called for Christians to protest and ask network affiliates to block its airing. However, I haven’t always agreed with the AFA’s assessments and I feel that loud protests and boycotts often only create sympathy and curiosity and have the opposite effect of actually increasing viewership.

But I must say this: in this instance, the American Family Association was spot on. The show has enough stupid subplots to make your head spin and is so over-the-edge in its attempts at dark parody as to be unbelievable. But surely it is only conservative Christians who think so, right? Au contraire! Washington Post reviewer Tom Shales (who last time I checked was no conservative evangelical) has weighed in with a scathing critique that is worth the read.

I feel sorry for my conservative Episcopal friends who I know are languishing right now–they needed this latest fiasco like they needed a hole in the head. To all my other Christian friends who feel the need to respond loudly to every cultural monstrosity which comes trudging down the pike, may I offer this suggestion–take a deep breath, relax and vote with your remote rather than playing the protest game. Do that, and the Book of Daniel and its desperate priest will be dead on the vine within a month.

Update: I forgot to mention that there was one bright spot last night. The Foundation for a Better Life bought advertising time and aired several excellent public service announcements throughout the show. They earnestly plucked away with numerous positive messages apparently in an attempt to counter the moral morass portrayed on the Book of Daniel. Now that’s the way to beat back a cultural monstrosity–celebrate a viable alternative.