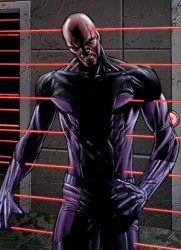 Eyegal and I went to see X-Men: First Class last Friday and loved it.

Loved it; as in it was a steamy Friday evening following another day of triple digit temps in Alabama and we just wanted to be in the AC and not have to think too hard and just sit back and lose ourselves in a fast-paced action story. In this case, one resonating with the early-60s James Bond, “Mad Men” period vibe that scratches my nostalgic itch these days. That kind of “loved it.”

You won’t see this movie among the list of finalists in next year’s Academy Awards, but it fit the bill for such Friday night circumstances and was another enjoyable installment in the X-Men movies series which started in 2000.

Still, as we exited the theater I felt that the movie’s makers had left out something very important.

I could identify one scene in particular that bothered me. Charles Xavier (“Professor X”) and Erik Lehnsherr (“Magneto”) are working together to round up a team of mutants to battle the evil Sebastian Shaw when they enter a cab driven by the half-Latino, half-black Armando Munoz (“Darwin”), a mutant who has the ability to adapt to whatever circumstances and environment that he’s placed in (e.g., growing gills under water).

Charles and Erik, who are there to recruit him, ask Darwin to drive them to Richmond, Virginia. Darwin’s eyes widen in surprise at the request, and at this point I expected him to say something like “I can’t go drive you to Richmond, they’ll eat me alive down there!” (remember, it’s 1962 and Jim Crow reigns), but instead he says something about it being “too far.”

It just seemed like a good time to slip in a reference to the persecution and discrimination that most black Americans, genuine “X” men and women in that they were “crossed out” as insignificant and not fully human by many, actually faced during that time in history.

But the writers and director took a pass. Darwin goes on to do some heroic deeds, but he eventually finds one situation that he can’t adapt to. So it’s up to the remaining all-white mutant crew to defuse the Cuban Missile Crisis and save the world as we know it.

Maybe, as Ta-Nehisi Coates points out in his NYT editorial, it was a simple matter of  “knowing your audience.” When we, the privileged, tell our stories, we have a tendency to leave out the bad parts and make things sound better than what they were–hence, all the longing for “The Good Old Days” these days.

All this served as a reminder to me to seek to “tell the truth” as I write my own stories, no matter how uncomfortable it may be for me and my audience.

For several months now, I have been researching and writing a story that has been “barely told,” a hidden story of Civil Rights that has remained concealed in the umbra of a much larger event which overshadowed it. If all goes well, you will be reading about it someday, and not on this blog (although if the publishing gods frown upon it, you just might).

Eyegal and I have discussed the ramifications of this. It is a story that many will find encouraging and uplifting, a high-water mark among a group of people not known for their social activism or championing of lost causes.

But there will also be those who prefer that such a story remain buried and untold. They will not like some of the things that I have found. Heroes will be tainted, or at least be shown to have feet of clay. I will “catch some flak.”

How are we to learn, though, to better ourselves as individuals and as a society, if we shield our eyes from the truth of our past failings? How can we “move on” if we first don’t acknowledge our sins and repent? How else will we ever learn to recognize and respect the “X-Men” among us?

Living stuck in the past is never a good thing, but you’ve got to spend enough time there to understand who you are and where you’re going. Otherwise, you’re bound to repeat the same mistakes when a new moral crisis emerges, as it always does.

Fortunately, I don’t have to worry about telling a story that will fill up a theater on a sultry Alabama June evening. But I do know my audience, and ultimately I love them too much to not tell them the truth.

I doubt that will make me a rich man, but I will sleep better at night.