My tongue-firmly-planted-in-cheek post of last week caught the eye of one Fusioneer who just so happens to be a former Federal gumshoe. Not only did she use her detective tricks-of-the-trade to “spy” a picture of me on the internet, but she proceeded to “Simpsonize” me as well: 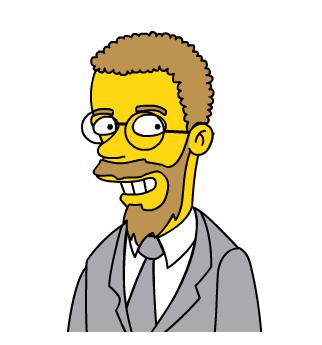 Handsome devil, don’t you think? I think he looks more like a Freudian psychoanalyst than an optometrist.

Now I was already aware that this former G-person (let’s call her “June”) knew who I was because I found out that she did several months ago (I have my own sources, you know). But June is no stalker, and we’ve traded some good-natured emails about cyber-snooping and other topics that I’ve blogged about.

I also wasn’t too surprised that she could find a picture of me as well since there are several of them floating around out there in cyberspace. Everyone knows where I grew up, where I went to college, my occupation, where I live, what my family looks like, where my kids go to school and most can easily figure out where I go to church even though I’ve never mentioned it by name. The large majority of folks who pass through here regularly know who I am and what I look like and that I’m no big fat hairy deal.

Really, the pseudonym is, like many things on this blog, a tongue-in-cheek parody in and of itself, and the day will probably come soon when I will finally “reveal” my true identity to the minority who may still be in the dark. In the meantime, why not maintain a little mystery and have a little fun with it?

But still, this should serve as a lesson to everyone who blogs (anonymously or not) of how easy it is to tie the words written to the person doing the writing. The digital trail, even for those with a modicum of research skills, is relatively easy to follow. “Anonymity,” at the end of the day, is an illusion; assimilation is only a key stroke away.

Actually, now that June has finally “outed” me, I’m kinda relieved. The pressure of having to start each day looking like Pre was really starting to get to me.