Okay, so I didn’t really look like Jim Ryun, even though I tried to, and I sure wasn’t as fast as he was.

What did I look like back in 1978 at the so-called “peak” of my running career? Behold: 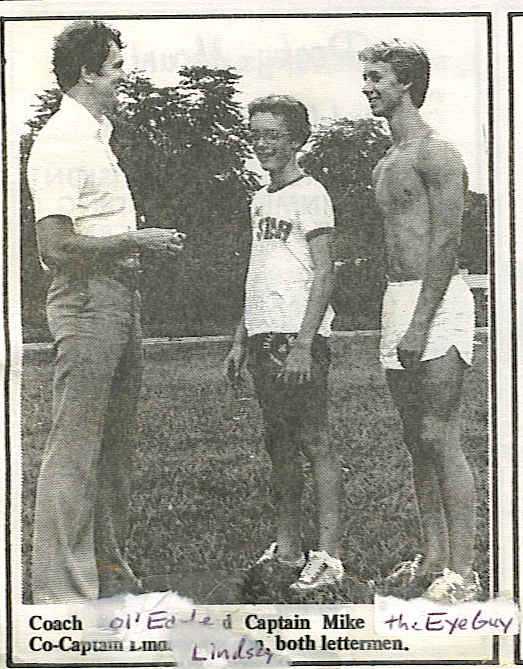 The ectomorph in the middle is me. I think I may have weighed 130 lbs back then…sopping wet. The blond Adonis on the right who looks like he should be giving massages to rich, middle-aged women at Club Med is Lindsey. Coach Earl “Dude, where’s my car?” F. is on the left.

Now before all you ladies go getting too worked up over Lindsey, I should point out that he never beat me in a race, and we all know how important that is later in life. Like good looks are going to get you anywhere–ha! Besides, all that muscle can really weigh you down around mile-3 anyway.

It’s amazing how fast you can get when you’re that skinny. I was fast, but alas, not the fastest. But I still enjoyed putting on my Nike Waffle racers and blasting pell-mell through the woods with 50 or so other dudes, especially if there were several creeks to cross. What a rush.

A word about ol’ Earl. He didn’t know a lick about running. He was a biology teacher (a specialist in “botany,” if you will) who was doing the coaching gig for the extra money. He also had a farm where he grew various plants, some legal, some not.

Earl often taught–and coached–in a marijuana-induced haze (hey, it was the ’70s), so much of the actual coaching of the team fell to me and Lindsey. But when the year ended poorly for me, flat on my back in a hospital after major reconstructive thoracic surgery (a long story that I’ve never told but maybe will someday), Earl showed up at my hospital bed with my trophy from the end-of-the-year banquet which I wasn’t able to attend.

I sort of remember seeing him, but I saw a lot of things during those morphine-drip days. But my parents said he placed my trophy on the bedside table and sat silently, with his head bowed, not speaking a word for a good 15 minutes.

I later learned from those who attended the banquet that he gave me a nice tribute, recognizing the fact that he couldn’t have coached the team without me.

He was a good man, and I hope he’s doing well.