In the most stunning political turn since Fort Sumter, University of Alabama football fans have ringed the State Capital Building in Montgomery with a barricade of RVs and double-wide mobile homes in an attempt to seize control of the state government.

They are demanding that Republican gubernatorial candidate Tim James cease and desist from his campaign and that Governor Bob Riley establish a new executive office, Beloved Athletic Ruler (B’AR), which would be co-equal with Governor and occupied by Alabama Head Coach Nick Saban.  Riley, an Alabama alumnus, is reported to be seriously considering the ultimatum.

The movement began suddenly this past week after James, an Auburn grad, allegedly made intemperate and ill-advised remarks regarding Saban in which he questioned the coach’s maternal bloodline and threatened to reduce his salary or even outright “fahr his a**!”… Read the rest

Nice try, but no cigarro.

We know you’re a little sore because “L” comes before “R” in the alphabet. And you probably felt a little trampled upon when we drove an armada of Crimson, elephant-festooned RVs with horns that blare “Yea, Alabama,” not once, but twice, through your state in early January on our way to the Rose Bowl and back (Roll Tide!).

But did you really think you could captivate the attention of the entire country with your so-called “controversial” new immigration law? You call that “controversial?” You call yourself “conservative?” Do the names “George Wallace” and “Bull Connor” ring a bell with you people?… Read the rest

I don’t always speak Spanish, but when I do, I prefer having Jose Rafael Rodriguez (aka, my translator “Danny”) somewhere in the immediate vicinity. I am neither the most interesting man in the world, nor the most bilingual.

I tried to memorize enough Spanish eye care phrases to get by on my recent trip to Guatemala, but despite my best efforts and intentions, I found myself leaning hard on Danny. I would usually start out the day doing a passable job-abre sus ojos (“open your eyes”), mira arriba (“look up”) –but as things got hot and busier and I became increasingly fatigued, I started to mangle my rote phrases more and more.… Read the rest

In a rather anticlimactic move, the NCAA Men’s Basketball Committee announced this morning (off the record, of course) that the officiating crew for tonight’s title game between the fascist (or communist if you prefer) Duke Blue Devils and the clean-cut, All-American kids from Hickory High Butler University will consist of former Duke greats Christian Laettner, Bobby Hurley and Grant Hill.

“Might as well go ahead and say it out loud,” an unnamed NCAA source wearing a Duke coaches polo said. “Everybody knows we stack the deck for the Devils, anyway, although we kinda dropped the ball on that from 2001 until now.”… Read the rest

The road to Montellano, Guatemala started in a small, dingy-gray room on the 11th floor of Roanoke Memorial Hospital on April 2nd, 2009. It was there around 5:00 AM that I held my mother’s head in my hands and shouted words of love and farewell over her as she drew her last breath in this life.

You don’t travel into the Valley of the Shadow with someone and then back out again without being changed forever. The Reaper’s sickle passes so close to your own skin that you feel its wind. It cuts, and if you’re standing near enough, you bleed.… Read the rest

I had a very smart man, a rocket scientist in fact (we have a few in Huntsville), tell me recently that America was going to hell in a hand basket. He didn’t say it quite that way because a respectable Christian, Southern gentleman would never drop the “H” bomb in front of the ladies unless he was reading it out of the Bible. But that was the basic gist of it.

He said a lot of things, that we had strayed from the intent of the Founding Fathers to establish a “Christian Nation,” that widespread belief in evolution was the root of much of society’s evil and ills, including increasing teenage suicide rates, and that really things had grown much worse since prayer was banned in public schools.… Read the rest

I would never tell my good friend Dr. Mark Elrod of Harding University (Hail!) to go to hell. He’s too nice a guy for that, plus he has this “condition”–an enlarged heart. Not the type that would cause you to keel over in the middle of a pick-up basketball game, but the kind that bleeds heavily when people are suffering. It’s a malady we could all use a little more of these days.

As for Pat Robertson and Rush Limbaugh, those purveyors of post-quake logorrhera, and the political dude from South Carolina who when speaking about people on public assistance used the analogy of denying animals food so they couldn’t “breed” but now “regrets” saying that even though it brought him much attention and fired up his “evangelical” base–I would wish them all straight to hell in a handbasket.… Read the rest 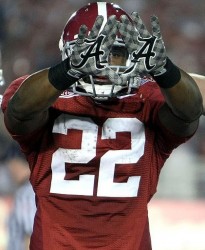 Number One Son and I had just been discussing what could possibly be on the palms of Alabama’s new Nike Pro Combat player gloves, and it didn’t take us long to find out.

We knew that the Crimson Tide was among several teams that would be receiving the new gear, which featured a particular avatar representing the “spirit” of each team, but Bama’s was missing from Nike’s preview website.

But when Heisman Trophy-winning tailback Mark Ingram scored his first touchdown in the BCS Title Game against Texas, he flashed the new gloves toward the camera for all the world to see.… Read the rest

Shon Smith, preaching minister at the University Church of Christ in Tuscaloosa, Alabama, stood this past Sunday and delivered the goods on how a Christian, especially the white-bread, Southern evangelical Republican-voting version, can pray for President Obama and find common cause with him. In short, it’s a recipe for spitting out those “sour grapes” and just getting on with it.

The 1/25 sermon (h/t to Number One Son for passing it on) was entitled “A New Era” and can be found here. The whole 30+ minute sermon is worth listening to, but the meat (and it is that, not milk) on the why and how of praying for President Obama begins about 6 minutes in.… Read the rest

For those who were fearful that comedians like Jon Stewart would be among the ranks of the unemployed during an Obama administration, know hope.

And have a great weekend, everyone.… Read the rest

The road to hell is paved with adverbs.

Not to needlessly worry. The stray adverb has found its proper home, and President Obama has faithfully and flawlessly executed the oath of office.

To all of you who were unnecessarily baptized twice: Let it quietly go.

I was worried yesterday morning that I would be so busy in the clinic that I wouldn’t be able to catch any of the inauguration. As it turned out, many of my patients failed to show (hmmm…perhaps it was too cold, or maybe they had something on TV they wanted to watch?), so I did see a good bit of it, including the swearing-in ceremony, on the television in the break room. And even in those moments when I was tied to my desk, there was good, ol’ reliable NPR.

During one lull in the action, I poured myself yet another cup o’ Joe and sat down to watch as the Presidential motorcade made its way to The Capital Building while a million onlookers, quivering from the cold and bold expectations, formed a happy guantlet whose only weapons were shouts of jubilation flung with reckless abandon.… Read the rest

Allow me to explain.

Last Saturday, the thought began to cross my mind: I wonder if anyone will pray for President-elect Barack Obama at church tomorrow? It began to burr into my consciousness; no, it actually got stuck in my craw. I figured I knew the answer to the question, but then I thought: Wait Mike, you ornery old so-and-so, break some new ground–think positively and charitably for once.

And I tried. I really did.… Read the rest

Michigan minister Josh Graves composes a fitting coda to what has been an historical presidential election cycle.… Read the rest

I was extremely proud of both President-elect Obama and Senator McCain during their respective speeches last night. I thought they were both pitch perfect–humble, gracious, conciliatory, both obviously mad in love with this country. Hardly the rantings of a terrorist Antichrist or a senile, warmongering monster, two caricatures which, despite millions of dollars in negative ads over the course of the past few months, just don’t quite stick.

Speaking of pitch perfect, my good friend Doug Mendenhall, Huntsville Times columnist and journalism professor at Abilene Christian University, offers up a nice portion of soul food for the morning after.

Whether you’re a conservative, liberal or something in between, bon appetit and God bless.… Read the rest