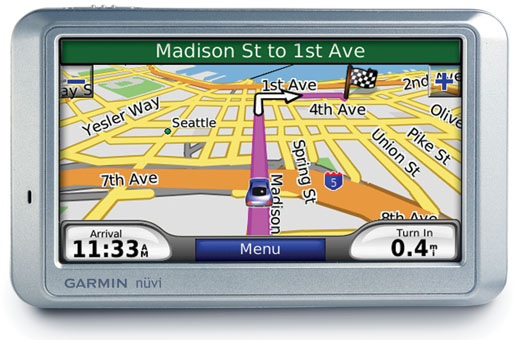 I looked around and the mood among my fellow customers was one of great jubilation. One man was happily chattering into his cell phone, “Can you believe this?” Another finished filling up his Ford F-150 Double Cab, stared at the final total and started bawling like a baby, tears of unadulterated joy flowing like a river down his ruddy cheeks.… Read the rest

Bama has a bye, so that means no pregame blather from me this week. Don’t be so sad.

Time instead to focus on the transcendent. You know, the deeper and richer things that rise above mere plebeian, partisan contests and remind us all of just how high the human spirit can soar.

Things such as fine art:… Read the rest

Marvin the Goldfish spent 13 years swimming itty-bitty laps inside the fish tank on our bathroom counter. That translates to approximately 120 human years; not as old as Methuselah, but long enough to make me wonder what was in those fortified fish flakes he enjoyed so much. 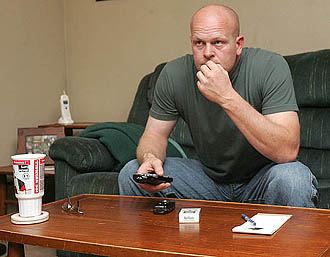 “A full 67 percent of Americans say they’ve seen enough and they don’t want any more presidential debates. The other 33 percent are plumbers who want to hear their name on television.” – Conan O’Brien

McCain front man and pseudo-plumber “Joe” Samuel Wurzelbacher of Holland, Ohio, a.k.a. “Joe the Plumber,” continues to stretch his 15 minutes of fame to the breaking point and beyond.

Apparently, he’s gone all Nashville on us and plans to parlay his recent notoriety and mad music skillz (honed while singing the latest Aaron Tippin tune in the shower) into a recording contract. What a country!

The only question remaining is this: Who will play Joe the Plumber in the made-for-TV movie?… Read the rest

I’ve had to chuckle a bit at all the talk of socialism over the past few days.

I thought: Hey, aren’t we already a bit socialist anyway?

Correct me if I’m wrong, but didn’t our federal government just basically take over our financial system, and under a Republican president no less?

Don’t we already garnish a portion of the wages of working stiffs like you and me and funnel it toward a fund from which we provide health care (Medicare) and financial support (Social Security) for the elderly?

Aren’t I personally part of a system that takes your money–yes, YOUR MONEY–and pools it to provide a vast fund for the health care of our nation’s veterans, you know, the ones who as President Lincoln said, “hath borne the battle” and therefore we have a moral obligation to support?… Read the rest 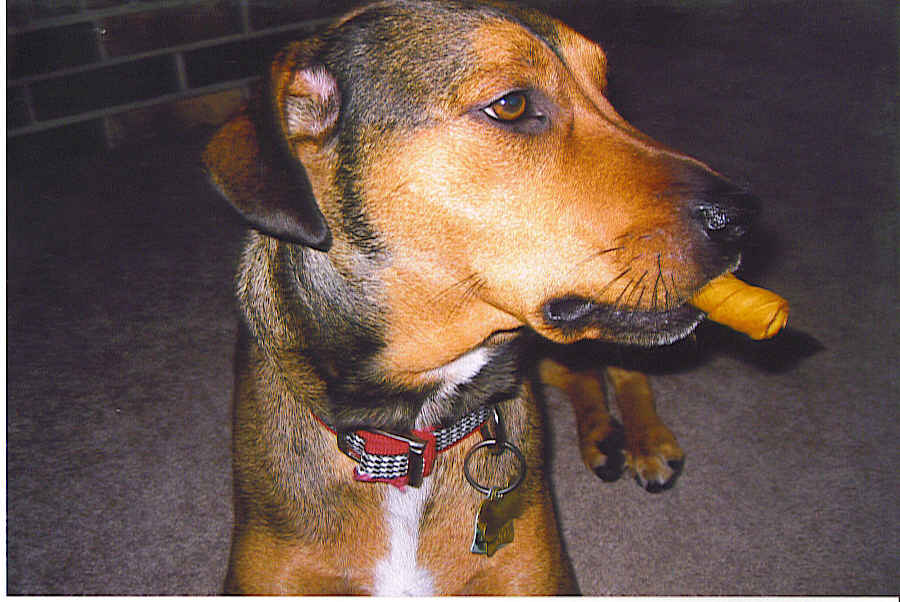 The legions of crimson-clad Bama fans who invaded Knoxville’s Neyland Stadium, turning it into Tuscaloosa-Northeast, weren’t the only ones psyched up about the Tide’s workmanlike 29-9 dismantling of what’s left of the Tennessee Volunteers Saturday night.

As you can see, despite the threat of NCAA sanctions for “extra benefits,” Amazing Gracie the Wonderdog fired up her traditional victory stogie nonetheless.

Come to think of it, Gracie’s life revolves around a full menu of “extra benefits:” 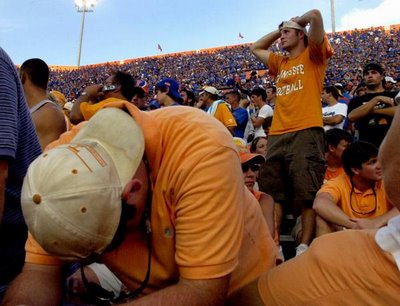 This picture of distraught Tennessee Vol fans was taken at Florida last year, but it’s probably pretty representative of how they looked toward the end of that 41-17 smackdown in T-town a few weeks later when the Million Dollar Band was firing up The Rammer Jammer.

For those of you from other less-civilized parts of the world, The Rammer Jammer is a traditional, and somewhat controversial, cheer taunt which is heard in the closing seconds of a football game when the outcome has been decided in the Crimson Tide’s favor. Oh sure, it does contain a relatively mild profanity, but that very same word is mentioned in the Bible a bunch of times after all, so it can’t be that bad.… Read the rest

I saw it live and you’ve probably seen it a gazillion times since Saturday, but the lick that S.E.C. football umpire Wilbur Hackett Jr. layed on South Carolina QB Stephen Garcia is certainly worth watching again, don’t you think?

Hackett, who played linebacker for Kentucky in the late 60s, has pretty much been given a pass on this with even the “Ol’ Ball Coach” Steve Spurrier saying that it was an “accident,” but I don’t know. Watching the way he shuffles his feet, closes down on Garcia and then lays that forearm into him looks more like some kind of flashback to me.… Read the rest

I’ve been bothered by a bit of insomnia lately, but last night I slept like a baby. The difference? Presidential debate #3. Thirty minutes in, I was starting to nod and drool, so to avoid further embarrassment, I stumbled to bed and was out for the night.

I apparently missed some sharp exchanges, but I suspect those were nothing compared to the fireworks taking place at the Real Debate in Elizabethton, Tennessee. There Mark Ciptak, a blood bank employee for a local chapter of the American Red Cross, was trying to explain to his wife Layla the reason behind the loud, smelly brain fart in which he decided to go behind her back while she was still groggy from delivering their third child and change the baby’s name from “Ava Grace,” which they had previously agreed upon, to “Sarah McCain Palin Ciptak.”… Read the rest

(This is Chapter VII of a series that I started but never really finished…let me know if you want more because there’s plenty).

Listen, I know times are tough. After I checked my retirement and college savings accounts yesterday, I had to reach for my inhaler and start playing the Taizé chants on my iPod in a continual loop.

But a little perspective is in order–I lived through the Arab Oil Embargo of the 1970s, for Pete’s sake. And as this February 20, 1975 political rant from the 7th grade personal journal that I kept for Ms. Fine’s class at Burnt Chimney Elementary School in Wirtz, Virginia amply shows, I was madder than #$%@&*, and I just wasn’t going to take it any more:

You said I could think of something to put in here, so heres the one thing I thought of [we didn’t cover dangling prepositions until 10th grade].

It’s Monday, and hopefully yours is off to a good start. But if it’s not, perhaps I can lend you some much needed perspective with a few Monday morning meltdowns gleaned from fan boards and blogs over the past couple of days. First up, an Ole Miss fan accepts the inevitable:

“We are not today, tomorrow, next week, next century in a position to be competing for conference or national championships in any sport. Period. End of Story. Take it to the bank. Put it in your pipe and smoke it. We can be competitive, but not champions.”

Over in Hawgville, things aren’t any better:

“Yet here we are again, after yet another blowout, and the same old yada,yada,yada.

Although I’m currently in Nashville with Eyegal (saw Hansard/Irglova at the Ryman last night–it was pure magic!), I’m coming home. Following the lead of Senator McCain, I have decided to suspend this mini-vacation and all my daily activities, including personal hygiene and marital relations, until such time that we have a bailout deal in hand.

Speaking of bailouts, here’s some of the apparent rationale for the $700 billion requested by Treasury:

“It’s not based on any particular data point,” a Treasury spokeswoman told Forbes.com Tuesday. “We just wanted to choose a really large number.”

Data, smata–who needs it? Since we can just pull very large numbers out of thin air, may I choose the amount of my tax refund year?… Read the rest

Cognitive dissonance. For me, it could be simply defined like this: 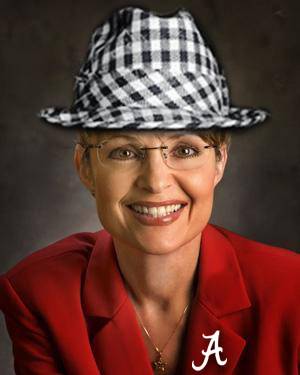 No wonder Palin/McCain has a 24 point lead in Alabama. Then again, it could be just all the conservatives who live here. After all, everybody knows a “true conservative” would never support Obama.

Well, on to The Game. I just want my loyal Arkansas readers to know that I love you. I really do. But here’s the plain, unvarnished truth: If Bama brings their A-game, it could get ugly quick (ask Clemson).… Read the rest

You know me, I always come back from T-town with a story or two.

There were so many Auburn fans in Tuscaloosa last Saturday you’d have thought it was Iron Bowl weekend. They were driving around with their orange and blue flags, holding up their very premature 7-finger salute, and generally hootin’ and hollerin’ like it was feeding time down at the ol’ trough. Since they were playing the Bulldogs in Starkville and had a 6:00 pm start time as well, they were passing through around lunchtime on their way to their game. And what a game that turned out to be!… Read the rest

Heh, leave it to the Brits to send us (and Palin-mania) up in proper fashion. My favorite line in the video?